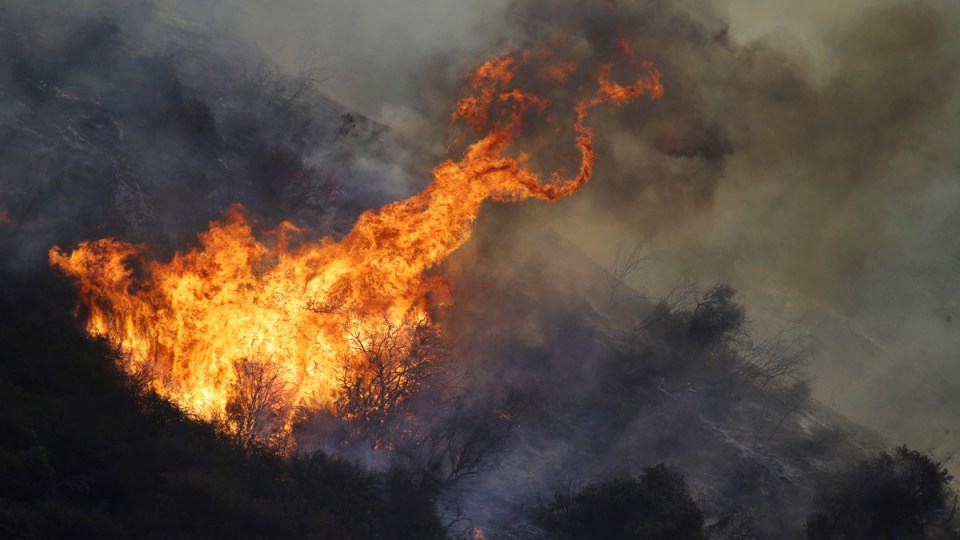 US celebrities are among thousands forced to make a late-night dash to safety after a fast-moving fire engulfed the hillside of Los Angeles’ wealthiest suburbs.

Basketball star LeBron James said his family drove around for hours searching for emergency accomodation as the fire consumed the scrub-covered hills not far from the city’s most luxurious homes.

Also forced to flee was Terminator actor and former California governor Arnold Schwarzenegger, who warned other residents: “don’t screw around. Get out.”

The fire broke out about 1.30am local time (7.30pm Australian eastern daylight savings time) and spread to 200 hectares, shutting down a major commuter thoroughfare and threatening the renowned Getty Center museum.

The blaze was just one of more than a dozen burning across California, including a large fire threatening the wine country north of San Francisco.

The emergency also forced the partial of one of the state’s busiest roads, the Interstate 405. Commuters posted videos of slopes aglow with menacing orange flames close to the road’s edge.

Agents of SHIELD actor Clark Gregg and Sons of Anarchy creator Kurt Sutter also said on Twitter they had been forced to evacuate their homes.

At least five homes had burned down but there were no reported injuries, Mayor Eric Garcetti told reporters at a news conference with fire officials, warning that he expected the number to rise.

Man these LA 🔥 aren’t no joke. Had to emergency evacuate my house and I’ve been driving around with my family trying to get rooms. No luck so far! 🤦🏾‍♂️

“This is a fire that quickly spread,” he said, urging residents in the evacuation zone, which encompasses more than 10,000 homes, to get out quickly.

James, an area resident who plays for the Los Angeles Lakers, said he had heeded the warning and had been driving around before dawn with his family looking for shelter.

“Finally found a place to accommodate us!” he wrote a short time later on Twitter. “Crazy night man!”

Officials at the Getty art museum said the fire was burning to the north of the building, which was designed with thick stone walls to prevent fire from damaging its treasures.

We evacuated safely at 3:30 this morning. If you are in an evacuation zone, don’t screw around. Get out. Right now I am grateful for the best firefighters in the world, the true action heroes who charge into the danger to protect their fellow Californians. #GettyFire

Marc Chenard, a forecaster with the NWS’s Weather Prediction Center, said wind gusts in northern California would abate by midday and in the south of the state by later in the afternoon.

Wind gusts can be between 80kmp/h and 96kmp/h, with some significantly higher, he said.

The northern California wine country has borne the brunt of the fires, with more than 260 sq km burned and 190,000 people evacuated in the Kincade Fire.

Only about 5 per cent of that fire was contained early on Monday after crews lost ground against the wind-driven wildfire a day earlier.

More than 4000 people were battling the Kincade Fire, the worst of more than a dozen major blazes that have damaged or destroyed nearly 400 structures and prompted Governor Gavin Newsom to declare a statewide emergency.

Investigators have not yet said what they believed caused the blaze, although it ignited near a broken wire on a Pacific Gas & Electric transmission tower.

More than a million homes and businesses were without power on Monday morning, most of those from planned outages. Forecasts of high winds had prompted PG&E to shut off power to 940,000 customers in 43 counties on Saturday night to guard against the risk of touching off wildfires.

PG&E expects to issue a weather all clear for safety inspections and restoration work to begin early Monday morning for the northern Sierras and North Coast, the company said.

The governor has been sharply critical of PG&E, saying corporate greed and mismanagement kept it from upgrading its infrastructure while wildfire hazards have steadily worsened over the past decade.

‘I am not afraid’: The modern unknown soldier risks it all in Ukraine
Energy market reform will be a big boost for emissions reductions: Chris Bowen
Greens sign up for Labor’s looming jobs-and-skills summit as Liberals stick with boycott
Joe Biden’s $430b green victory for the environment
China cementing its Thailand ties with joint military exercises
NRL: Titans frantic to end 10-game losing streak as Manly showdown looms
Anthony Albanese wants 50 per cent renewable energy target as he recasts ALP as ‘job creator’
Today's Stories