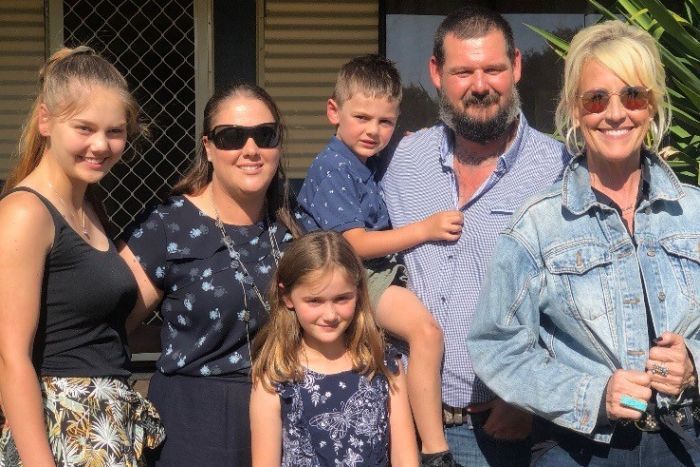 Class action client Reannan Haswell with her family and US activist Erin Brockovich, who is backing the legal action. Photo: ABC

It’s the largest class action Australia has ever seen — four times larger than the Black Saturday class action of 2009 — and involves people across the country.

Up to 40,000 people who live and work on land contaminated by the chemical compound PFAS are suing the Australian Government, arguing their property values have plummeted, RN’s Law Report can reveal.

The action will be filed by Christmas.

Shine Lawyers, the firm representing the clients, has enlisted the support of American activist Erin Brockovich.

“The science is in on these chemicals. It can cause cancer,” Ms Brockovich tells Law Report.

She names “testicular cancer, kidney cancer, thyroid disease, thyroid cancer” as some of those that have been associated with PFAS — a link confirmed by countries including Germany, Britain and the US, but denied by Australia.

Ms Brockovich is “dumbfounded” by what she considers Australia’s inaction on the issue.

“Every one of us has a common bond here, about loving the environment and our family — what we leave, the legacy we leave for our children. We’re destroying that and it’s heartbreaking,” she says.

“It’s fearful and it should be concerning for all of us.”

On its website the Department of Defence states that there is “limited to no evidence of human disease or other clinically significant harm resulting from PFAS exposure at this time”.

However, given the ability of PFAS to persist in humans and the environment, it also recommends that exposure to PFAS be minimised.

“They give warnings: don’t eat the fish, eat limited fish, don’t drink the water — but on the other hand, you’re telling people it’s safe,” she says.

What is PFAS — and why are thousands of people worried about it?
PFAS is a collection of synthetic compounds and it looks a little like bubble bath.

It is fire retardant and is “very effective at extinguishing jet fuel fires” says Joshua Aylward, lead counsel with Shine Lawyers, who is running the class action.

He says between the 1970s and 2000s, the Department of Defence used a significant amount of PFAS, present in firefighting foam, on Defence bases across the country.

Eight bases in particular are the subject of the class action.

“[PFAS] has leached into the environment and left the boundaries of these bases and entered into the communities, and it’s in the rivers and the creeks and the fish and the people,” Mr Aylward says.

“It’s in everything that they test around these bases.”

He says the communities living around these bases are “really hurting”.

“And then they realise they are trapped.

“These people are not wealthy people. They don’t own more than one house, most of them. They cannot just pack up and leave.

“They can’t sell their properties because people won’t buy them, and even if they could find someone to buy them, it’s for such a little amount of money that many of them couldn’t pay out their mortgages on their amount of money they’re being offered.”

Two government inquiries into PFAS have recommended either buying out properties of those who wish to relocate, or providing compensation for residents and businesses in contaminated zones.

Mr Aylward says what constitutes “safe” levels of PFAS is a question that garners a different answer, depending on “which government or which scientist you ask”.

But he argues that Australia is out of line with most of the Western world.

“In American and in Europe … they have much lower safe levels than what the Australian Government is saying at the moment,” he says.

‘Consumption of eggs is not recommended’

The Department of Defence has completed reports in six states and territories that provide significant analysis of human health risks in contaminated areas near Defence bases.

In them are findings that vary according to area, including:

The Department of Defence has alerted her to the fact that the home she shares with her partner and their three children aged between five and 16, has a contaminated water supply, something she says has “changed our whole way of life”.

She says she’d like to move but can’t get the necessary financial approval to borrow from a bank, which she says is a direct result of the contamination.

“We’re stuck. We can’t sell [the house]; banks aren’t lending to people to buy in the area,” Ms Haswell says.

Besides, she says “morally, you don’t want to sell it to another family because then they’ll be going through exactly what you’re going through”.

She and her partner are “at a bit of a loss”.

“We don’t have our kids’ birthday parties at our home anymore because we know that we’re putting other people’s children at risk. Sleepovers, those basic general kids rite of passage things, are things we’ve had to really seriously think about.”

She describes living with contaminated water as “like camping in your own house”.

‘We have to do better’

Back in the 1990s, Ms Brockovich took on a big corporation over the use of toxic chemicals; a fight later immortalised in a Hollywood film.

Since then, she says, we haven’t come far enough in dealing with toxic contamination.

She argues that “antiquated mentalities … that these chemicals can’t hurt us won’t carry us into the future”.

“We have to do better … governments need to rise up,” Ms Brockovich says.

“It’s so frustrating. All these years after the film and these issues are more in our face and more relevant today than they were back then.”

Ms Brockovich holds out hope for a more productive conversation in which, rather than “finger-pointing”, we can “find solutions to begin to fix the issue”.

“It can be done. It feels daunting and it is daunting, and we’ll never get anywhere if we keep hiding and we have no transparency and no trust that true information is being given to the people,” she says.

In a statement, a Defence spokesperson acknowledged separate class actions currently underway in the Federal Court over PFAS contamination: in Williamtown, NSW; Oakey, Queensland; and Katherine in the Northern Territory.

The spokesperson said the department “is aware that some law firms have been investigating potential class actions in relation to other Defence sites”.

“At this time, no formal documentation has been served on the Commonwealth in relation to any other Defence site,” the spokesperson said.

The spokesperson added: “Defence is working closely with the PFAS Taskforce in the Department of the Environment and Energy, which is coordinating the whole-of-government response to PFAS, including the responses to inquiries conducted by the Parliament.

“PFAS is a national issue facing a number of sites outside of Defence across Australia.”