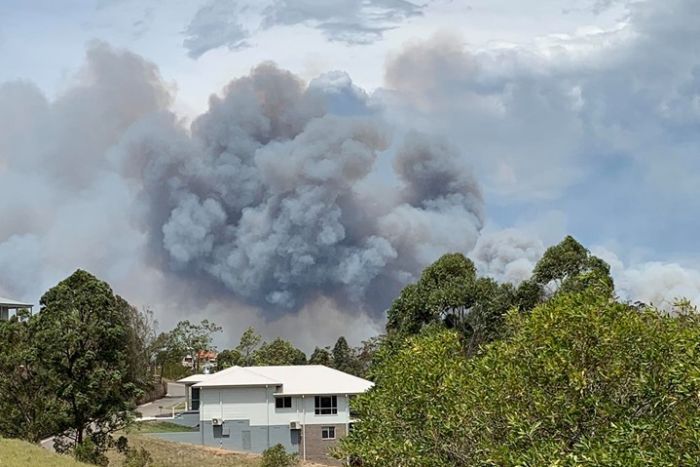 The fire near Darawank was threatening homes on Saturday afternoon. Photo: ABC

At least two homes have been destroyed near the town of Darawank on the NSW north coast, the ABC understands, as firefighters battle dozens of uncontained fires across the state.

The Rural Fire Service (RFS) had cancelled emergency warnings for three blazes on the NSW north coast, but has since reinstated the emergency warning for the blaze in Darawank, near Forster.

The RFS said with a southerly change, the fire was burning in a northerly direction towards Hallidays Point.

A fire that burned through more than 2,000 hectares at Tuncurry has been downgraded to a watch and act, as has a blaze at Mount George.

High temperatures and vigorous winds had resulted in high fire danger across the state.

At 10:00pm AEDT there were 90 bush and grass fires burning across NSW, with 42 uncontained.

RFS Deputy Commissioner Rob Rogers said Hallidays Point was also at significant risk, so crews worked quickly on blazes that had been “causing a lot of problems”.

Embers ahead of the main fire front had threatened properties in built-up areas like Tuncurry and Forster.

Deputy Commissioner Rogers said people had been airlifted out of affected areas and described the conditions as “horrendous”.

A fire around Minimbah Road to the west of Tuncurry, which has been burning for weeks flared up this afternoon, prompting its elevation to emergency level.

Properties around South Street, Tuncurry were under threat from the blaze, and residents had been warned to seek shelter.

An emergency level warning for a fire burning near Mount George, west of Taree, was reduced to watch and act level.

The RFS said the threat to homes on Knodingbul Forest Road had eased but residents in the area should continue to monitor conditions.

The fire around the area of Knorrit Flat has been burning for more than a week but broke containment lines under strong gusts.

Other areas of concern included Tyringham north-west of Dorrigo, in the Mount Kaptur National Park east of Narrabri, the Willi Willi National Park and Carrai Creek National Park, both west of Kempsey and in Martinsville near Lake Macquarie.

Deputy Commissioner Rogers said crews were tired and limited by the lack of water in drought-ravaged areas.

“Some of these fires … we have been dealing with them for the last two months now,” he said.

“It will get worse before it gets better.”

RFS spokesperson Anthony Clark said conditions are expected to ease slightly on Sunday, so today is a “race against the clock”.

He reminded people to report any fires to triple zero immediately.

Meanwhile, heavy rain on Friday morning and high winds on Saturday during practice at the Australian MotoGP on Phillip Island slowed riders and meant that the top 10 in Friday’s second free practice, held in bright sunshine, advanced to second qualifying where they will fight for pole position.

Heavy rain, hail and high winds lashed Melbourne throughout Saturday as thunderstorms swept across southern parts of the state.

While horse-racing enthusiasts continued to flock to Moonee Valley racecourse ahead of Saturday’s Cox Plate at 5pm, dozens of local community events were cancelled.

The showers are intermittent but they aren’t dampening the spirits on track! Plenty of action to come including the Ladbrokes Cox Plate #Legendary pic.twitter.com/7e56GjOEFC

Firefighters were called to secure a roof which had been peeled off a three-storey building in Melbourne’s CBD.

“Firefighters are on the roof of the building, and are using ropes to secure the sheet from above,” a Metropolitan Fire Brigade statement said.

“This is a complex operation due to the high winds,” the brigade said.

⚡ Thunderstorm forecast for Sat and Sun. Storms over S and E #Victoria will contract to the E this afternoon & clear at night. Severe wind gusts are possible. Slight storm risk in the SE on Sun. Track lightning on our satpic: https://t.co/3hg1bVtAAT #VicWeather #VicStorms pic.twitter.com/nr6ekvB435