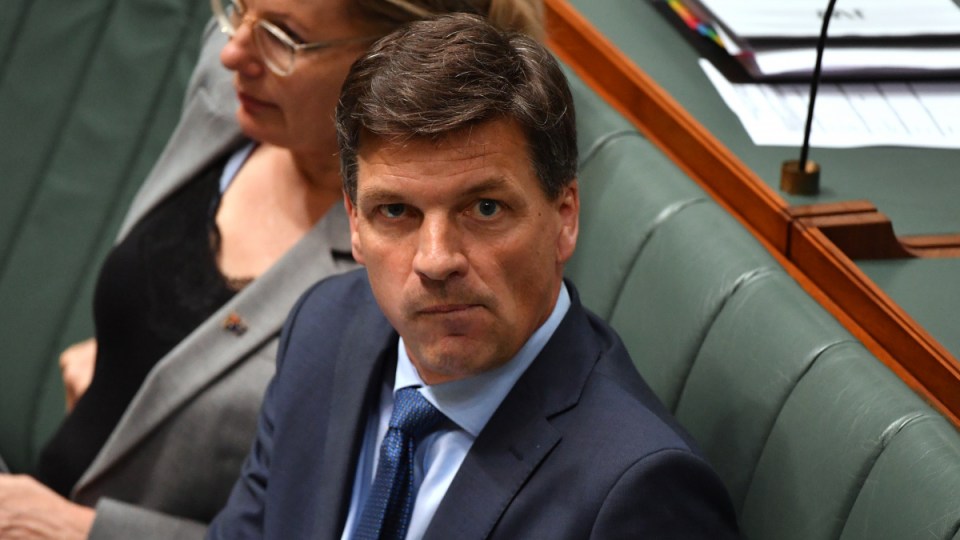 Federal Cabinet Minister Angus Taylor is digging in against accusations he used or peddled a forged document and may have acted illegally to score a political point against an adversary.

The Energy Minister has upped the stakes against his accusers, giving an assurance to Parliament he has only relied on information “publicly available” from an official website.

The furore surrounding Mr Taylor stems from a letter he sent to the Lord Mayor of Sydney, Clover Moore, on September 30, chastising her organisation for “unnecessary air travel” and suggesting there was a “real opportunity for your council to make a meaningful contribution to reducing Australia’s emissions.”

His letter cited Sydney City Council’s “most recent annual report”, which he said “shows your council spent $1.7 million on international travel and $14.2 million on domestic travel”.

The Minister’s figures are wildly at odds with the council’s actual annual report for 2017/18, which listed domestic transport, accommodation and travelling expenses at $4206.32 and the cost of overseas travel at $1727.77.

The $15 million difference between the two versions is astounding enough, but even more so considering Sydney City Council employs only about 2000 staff, many of whom would have occupations requiring little or no travel beyond Sydney.

Using parliamentary privilege, Labor’s energy spokesman Mark Butler has declared the discrepancy between the documents “a forgery” and asked “will the Minister assure the House this forgery was not made by him or his office”.

Mr Butler has since challenged the Prime Minister to write to NSW Police asking for an investigation into the alleged forgery and is threatening that Labor’s shadow attorney-general Mark Dreyfus will do so if Mr Morrison does not take up the challenge.

“It’s a claim that just does not stand up to scrutiny [and] for which he will not provide any evidence.”

In answers to other questions on the matter, the Minister told Parliament the document he relied on “was drawn directly from the City of Sydney’s website, it was publicly available”.

“I reject the bizarre suggestions and assertions being peddled by those opposite,” he told the Parliament.

If the Minister’s account is true, it remains at odds with the City of Sydney, which has examined metadata logs of its annual report documents online.

The council has told The Guardian Australia the logs “were uploaded on 27 November 2018 and not updated after that date”.

And the Minister, in briefing the Tele for this hatchet job news piece, told them the City spends $14m on flights and accommodation each year. This figure is grossly inaccurate. Last year, to cover the cost of travel – for our over 2,000 staff – the City spent just over $200,000.

In another answer to Parliament, Mr Taylor added the qualification “I’m advised” that the document was drawn from the Sydney City website and it was publicly available.

But if he is in error, the qualification might not save him from censure under the Prime Minister’s rules on ministerial standards.

It states “Ministers are expected to be honest in the conduct of public office and take all reasonable steps to ensure that they do not mislead the public or the Parliament”.

If an error does occur it must be “corrected or clarified, as soon as practicable”.

‘I am not afraid’: The modern unknown soldier risks it all in Ukraine
Greens sign up for Labor’s looming jobs-and-skills summit as Liberals stick with boycott
Joe Biden’s $430b green victory for the environment
China cementing its Thailand ties with joint military exercises
NRL: Titans frantic to end 10-game losing streak as Manly showdown looms
AFL: Western Bulldogs cling to finals hopes after GWS thriller
‘Us and them’ divide at Splendour festival: lawyer
Today's Stories