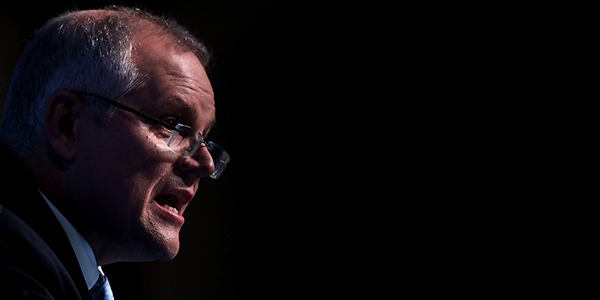 Scott Morrison says it's important to consider a budget's long-term impact on the economy. Photo: Getty

New Treasury secretary Steven Kennedy has called for patience on the impact of tax cuts on the economy, predicting even if families are using the cash to pay off a mortgage now, it will still lead to more spending later.

Appearing before a Senate estimates committee, Dr Kennedy said the impact will continue to be monitored closely.

Labor has called for the Morrison government to bring forward tax cuts, to help boost spending and stimulate the economy amid increasing concerns that record low interest rates are failing to have a big impact.

“The recently legislated personal income tax cuts and declines in interest rates are providing support to disposable household incomes. We expect this to flow through to increased consumption,” Dr Kennedy told Senate estimates.

“Although we have some indicators of consumption available for the September quarter which have not shown a particularly large improvement, these are only partial. And it is difficult to know what these indicators would have been had the tax cuts not been implemented.

“Maybe the environment was weaker than we expected. Trying to pick that out of the macro data is difficult. We should wait a little bit longer. We will never know the counterfactual.

“We will continue to assess the data on consumption as it becomes available, but it is worth noting that even if households initially use the tax cuts to pay down debt faster, this will still bring forward the point at which households could increase their spending.”

But Prime Minister Scott Morrison has indicated the government has no plans to do that although it is reviewing the need for further stimulus in the lead-up to the mid-year budget update.

“But you also need to ensure you have a budget that is good for tomorrow, not just today,” Mr Morrison told Perth radio 6PR.

“Now we are facing a lot of global uncertainty so, you know, this is what Kevin Rudd did when he was in power. He came in, panicked, blew the budget and we’re are still paying for it now. When people are saying we’re in Kevin Rudd’s debt they mean literally, the debt he left behind because he went and blew the budget.

“Now you know we had the stimulus funding for overpriced school halls, we had insulation and solar home programmes which cost $2 billion to implement and then $1 billion to fix, and then we had rooms actually catch alight, we had stimulus payments being sent to people who had actually deceased and even pets.

“Stimulus activity is proven to be ill-considered, poorly planned and results in massive waste which means taxpayers end up paying for it. It’s not free money.”