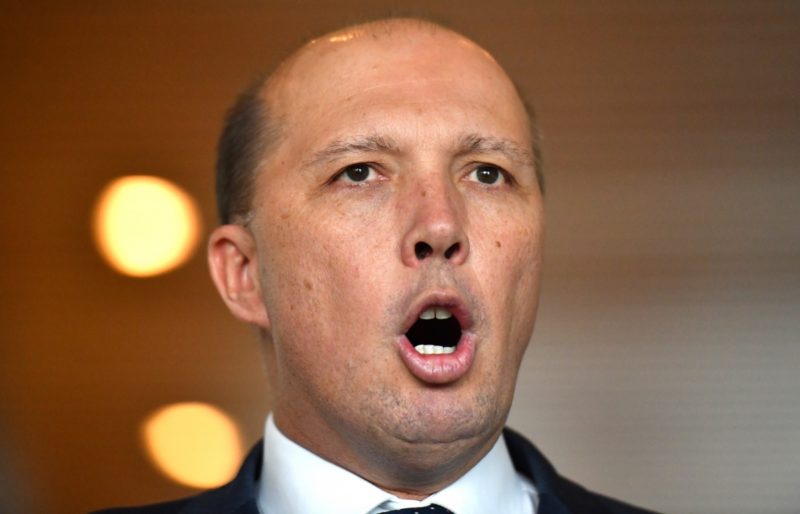 Home Affairs Minister Peter Dutton has seized on new figures around asylum seekers arriving by plane, as he sharpens his attacks on the Labor Party. Photo: AAP

Peter Dutton has pounced on new figures around asylum seekers arriving by plane, arguing they expose Labor claims of a crisis at Australia’s airports as a sham.

“I think Kristina Keneally’s red herring on this has been blown completely out of the water,” Mr Dutton told reporters in Canberra on Wednesday.

Only 69 cases were identified by police as potential victims of trafficking, and only a handful of these people claimed protection.

The figures conflict with Senator Keneally’s claims that people smugglers have changed their business model from boats to planes.

She has argued criminal syndicates and shonky labour hire companies are flying people into the country to work in exploitative conditions.

The Department of Home Affairs has said there is no evidence to suggest large volumes of people are getting caught up in such schemes.

But Senator Keneally is unbowed.

More than 95,000 people have arrived by plane over the past five years and claimed asylum on arrival.

Almost 90 per cent of these people were found not to be genuine refugees.

But people regularly stay in Australia for several years while they appeal the visa decision.

It’s time for @ScottMorrisonMP & @PeterDutton_MP to admit the 100,000 airplane people who have found their way into Australia are being exploited, are taking jobs away from Australians, and are suppressing wages right when too many Australians already can’t make ends meet.

“What Peter Dutton won’t admit, is too often these people are trafficked to and in Australia, they are exploited as they work for next to nothing,” Senator Keneally said.

“Ultimately, this leads to Australian wages being drive down, making it harder for Australians to get jobs whilst allowing vulnerable people to continue to be exploited in slave-like conditions.”