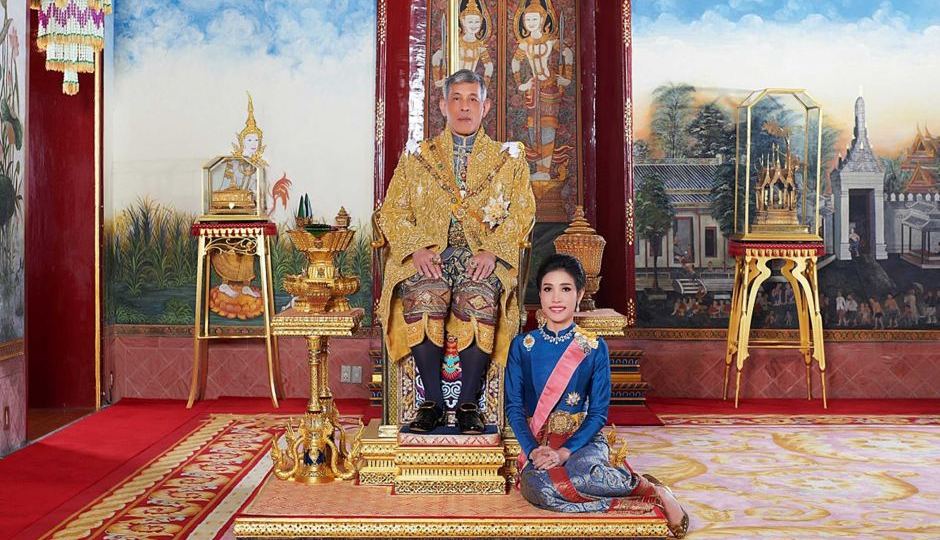 Now the recently crowned Thai King has turned heads again by suddenly stripping his royal consort of all titles and military ranks for “disloyalty”.

The 34-year-old former army nurse and bodyguard had breached a code of conduct for courtiers and was “disloyal to the king”, a two-page palace statement published in the royal gazette said.

She was dropped just three months after the King bestowed her the rank of “Chao Khun Phra” – royal noble consort – on his 67th birthday.

It was the first time a woman had received the noble rank in almost 100 years.

To celebrate, the typically private palace released more than 60 rare images and a biography of Sineenat, including a series of candid action shots showing her aiming a weapon and preparing to parachute.

But after a few months of fanfare, the royal excitement in the ‘Land of Smiles’ has now come to an abrupt end.

In Thailand, where details of the royal family are kept secret and criticism of the ultra-rich monarchy is punishable by up to 15 years’ jail, the scandal is bound to get people quietly gossiping.

But it’s not the first time the new king Vajiralongkorn has raised eyebrows. So who is the King of Thailand?

During his decades as crown prince, his mother Sirikit once described him as “a bit of a Don Juan”. In other words, a ladies’ man.

He was also known for taking his favourite miniature pet poodle Fufu with him everywhere he went, including royal engagements.

Vajiralongkorn loved Fufu so much that he named the poodle an Air Chief Marshal in the Royal Thai Air Force. The pair often wore matching uniforms to fancy dinners.

Unlike his late father – the beloved former king Bhumibol Adulyadej – Vajiralongkorn has tried to stay out of the spotlight since assuming power in 2016. It is  a difficult task given all three of his marriages have ended in flames.

His first wife, cousin princess Soamsawali Kitiyakara, bore him a daughter in their 16-year marriage. Meanwhile, he also fathered four sons and another daughter with his mistress on the side.

Their marriage lasted for about two years before she fled to the United Kingdom under mysterious circumstances.

An angry Vajiralongkorn told everyone she cheated on him and banned the sons they had together from ever coming back to Thailand.

His third marriage was to a waitress named Srirasmi Suwadee, who gave birth to a son before he suddenly divorced her and stripped her of all titles.

She was given a settlement and sent to an unknown location, while her parents were jailed for two and a half years for royal defamation.

Inside the life of Thai King Maha Vajiralongkorn