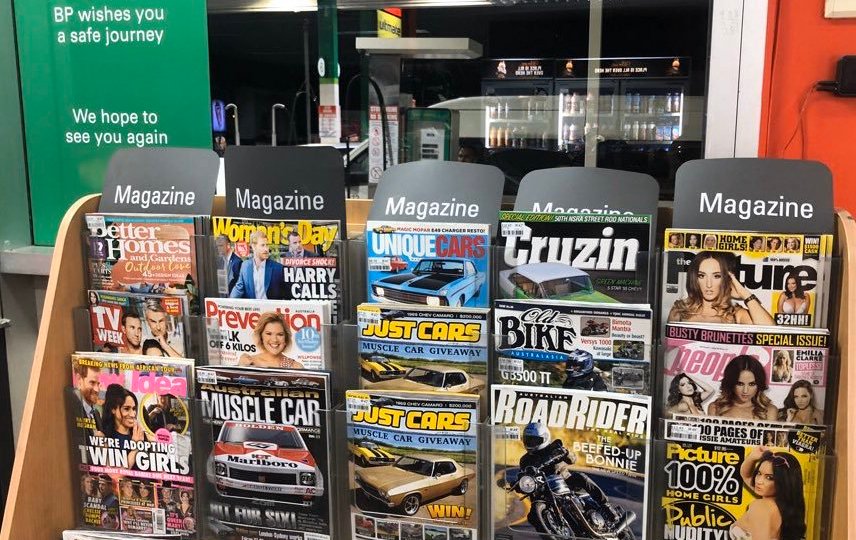 BP Australia has stopped selling People and The Picture magazines at its petrol stations after complains about the sexualised content.

Fuel giant BP Australia has pulled two “M+” rated magazines from its 350 petrol outlets across the country after complaints they sexualised young girls and promoted harassment.

Joining 7-Eleven, BP has removed The Picture and People magazines, published by Bauer, from its shelves.

“M+ rated magazines will no longer be stocked at our 350 company owned stores across Australia,” BP tweeted on Monday night.

Its decision comes after activist group Collective Shout said it alerted BP to recent covers of the Australian magazines, which frequently publish pictures of glamour models and stories with a sexual element.

Headlines on the covers included “Better Than Viagra” and featured a photograph of a young woman in pigtails with the caption “I have no gag reflex”, Collective Shout said.

Now the group turning its sights on supermarket giant Coles, which still stocks the publications.

“The display and sale of pornographic magazines in the public space creates a hostile environment for women and girls,” campaigns manager Melinda Liszewski said in a statement.

“We urge other retailers selling these magazines – such as Coles Express – to follow the example set by 7-Eleven and BP and cease the sale of ‘unrestricted’ pornographic magazines immediately.”

7-Eleven recently stopped selling the magazines in its 700 convenience stores.

Collective Shout campaigns against the objectification of women and the sexualisation of girls, according to its website.