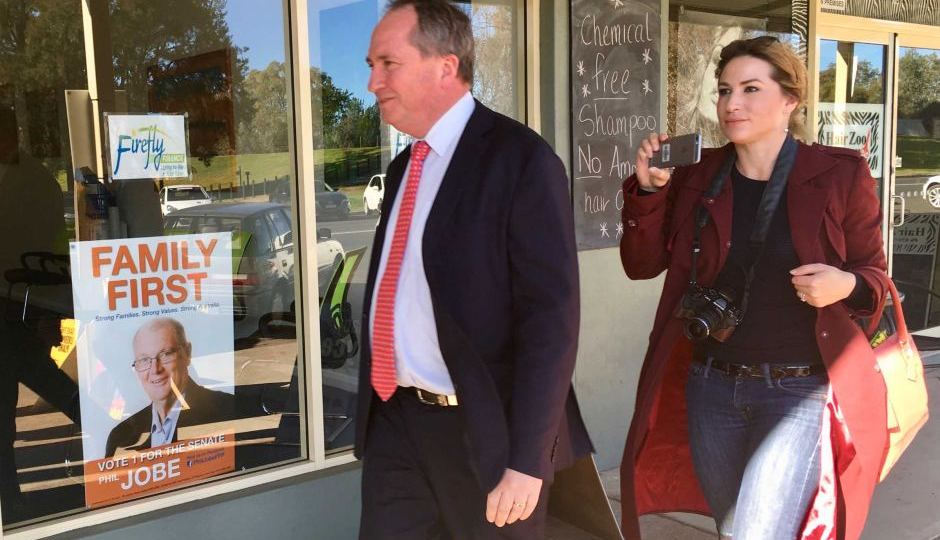 The relationship between Barnaby Joyce and Vikki Campion was revealed by a daily newspaper. Photo: ABC

Barnaby Joyce has used the publication of photos of his pregnant partner to argue that media freedom cuts both ways.

Mr Joyce accused news organisations of hypocrisy on Monday for printing photos of Vikki Campion, then pregnant with her first son with the former deputy PM, in 2017.

“You can’t say putting a private individual – a pregnant woman crossing the street – on your front page is in the public interest, which you did, and give yourself a Walkley for it.”

Mr Joyce resigned as deputy PM in 2017 after revelations he was expecting a baby with Ms Campion, a former staffer. Their relationship was revealed in the media with the publication of photos of Ms Campion on page one of a daily newspaper.

On Monday, Australia’s media organisations united in a massive “Right to Know” campaign to warn against growing censorship and attacks on press freedom by the federal government.

The front pages of the day’s major newspapers replicated illustrations of a heavily redacted government document, alongside an advertising campaign challenging laws that effectively criminalise journalism and whistleblowing.

Just weeks after the May federal election, federal police officers raided News Corp journalist Annika Smethurst’s home over a national security story she had written more than a year earlier.

The raids made international news, but so far none of the journalists involved has been told whether or not they will face jail time for reporting in the public interest.

“Police independence and freedom of the press are both fundamental pillars that coexist in our democracy,” he told a Senate committee in Canberra on Monday.

“I strongly believe in these two pillars, and this is the approach I intend to take.”

However, One Nation leader Pauline Hanson wants journalistic credentials toughened up to stop anyone from calling themselves a journalist, again raising the prospect of a licensing system.

“We’ve got to be very careful who we define as being a journalist. People who write a book could be classified as a journalist or those people that blog on Facebook,” she told the Nine Network.

“But I believe that people must be accountable to the public whoever they are, what position they are in.”

Liberal frontbencher Angus Taylor said the government was committed to striking the right balance between press freedom and national security.

“This is about getting the balance right and making sure we have a regulatory framework where we do protect press freedoms because they are enormously important, [but] there are circumstances where national security needs to be taken into account,” he said.

“As we’ve always said if there’s strong evidence and strong arguments to change we are open to making those changes.”

The media companies want law changes so journalists don’t fear imprisonment for doing their jobs and stronger protections for whistleblowers.

The company say more than 60 new laws have been passed in the past two decades that effectively criminalise journalism and penalise whistleblowing.