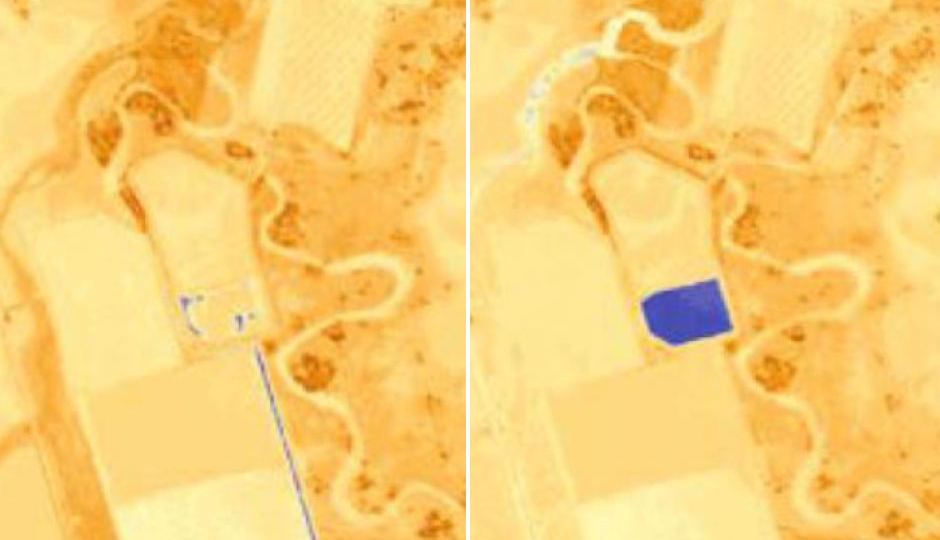 Satellite image of a filled dam, in the Namoi, one of 29 found between March 31 and April 5. Photo: ABC

Irrigators have slammed the Murray-Darling Basin Authority for releasing images of farm dams filled with water in drought-affected parts of the state, likening the move to the controversial Aussie Farms activist website.

The authority yesterday released a report showing routine satellite monitoring had detected 29 private dams in the Namoi, and a further three in the Macquarie, that were full or partially full during a pumping ban.

The ban was in force to protect the environment due to extreme drought conditions earlier this year.

The authority said the images weren’t proof of any illegal activity but it has referred the matter to the state’s watchdog, the Natural Resources Access Regulator.

Namoi Water is a peak industry body for irrigated agriculture in the north west of NSW.

Its executive officer Jon Maree Baker said the report was misleading and unfair to farmers struggling with the drought.

“We consider that this is no different to the Aussie Farms activist map,” she said.

“So I’m very concerned that people’s mental health, in seeing an image of their farm dam in a report being used out of context, absolutely puts them at risk of feeling very overwhelmed and vulnerable.”

The head of the National Irrigators Council, Steve Whan, said the authority should have handled things differently.

“My view is that it would have been fairer if this report had actually just been handed to the regulator and then was made public when they’d actually explored whether there was actually anything that was wrong,” he said.

“I think we’ve all got to recognise that, at a time of stress as a result of the most serious drought in the northern basin that’s ever been seen, a lot of people are just going to assume that wrongdoing has occurred.

“And that, I think, is unfair and disappointing.”

He emphasised there were several possible explanations for the water in the dams.

“One of the sites they’ve identified for further investigation is the Warren Racecourse, another is an irrigator property that had general security water and groundwater available at the time, and another is a property potentially owned by the Commonwealth government.”

In a statement, the local federal Nationals MP, Mark Coulton, called on the authority to remove the information about farmers until further investigations were completed.

“Without any charges being laid, and in the absence of any thorough investigations whatsoever, farmers in my electorate could be linked with illegal activity,” he said.

“While it is important that our valuable water resources are managed by the existing strict guidelines, it is vital that all facts are known before information like this is placed in the public arena.”

But the state member for Barwon, Roy Butler, said the possibility of farmers doing the wrong thing must be taken seriously.

“If they’re following the rules and they’ve got a legally-acquired right, I’ll back them to the hilt,” he said.

“But at the same time, if people do the wrong thing then I’m happy to see them referred to the regulator, to NRAR, and there be consequences.

“Because the industry’s under enough pressure at the moment, not all of it justified, and if people are doing the wrong thing and damaging the reputation of the industry then I’m sure there’s a lot of other people who need water for their agricultural operations and people along the river who would want to see them prosecuted.”

The MDBA was using the surveillance imaging to monitor first-flush flows into the Namoi, Macquarie and Warrego catchments which would have flowed into the Barwon-Darling and Menindee Lakes.

For some catchments, it would have been the first flows in months.