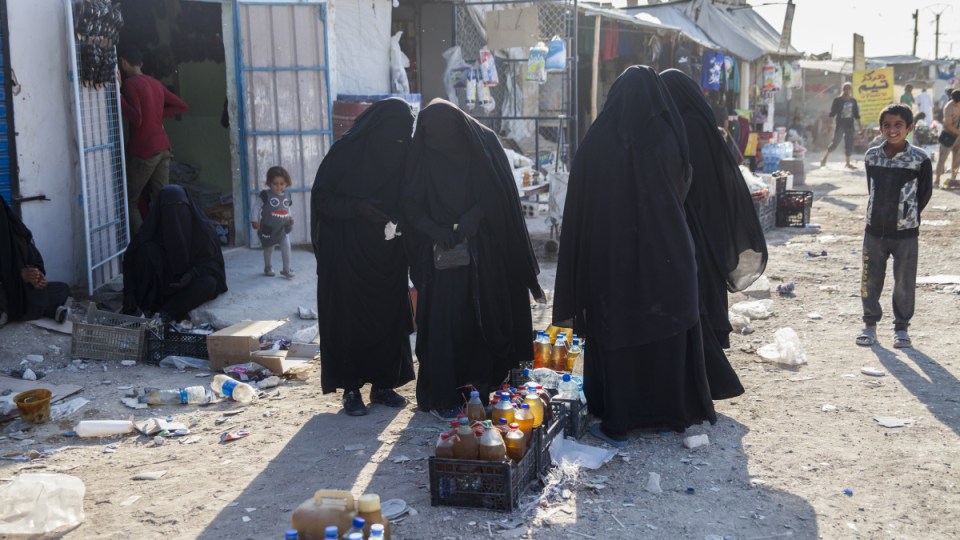 Women buy food at the Al Hawl camp, where about 72,000 people are residing, including 66 Australians. Photo: AAP
exclusive

Australia ignored repeated warnings that the window was closing to extract children from a refugee camp with ISIS brides and should consider, in extreme cases, rescuing the infants and leaving their mothers behind.

Save The Children has urged Prime Minister Scott Morrison to consider rescuing the toddlers of Melbourne-born terrorist Zehra Duman and bring them to Australia to live with their grandmother – even if it means leaving their mother behind.

The New Daily revealed last week that Ms Duman’s citizenship had been stripped under a secretive process that is automatic and based on conduct including being involved in terror recruitment.

The radical option of leaving behind mothers accused of terrorist links was “extreme”, the charity said, but might still be the best option for the children.

"Save the Children believes that children should be repatriated alongside their mothers or carers when it is in their best interest to do so"https://t.co/zHfgYbTz59

It’s the first time Save The Children has flagged splitting mothers and their children amid increasing military clashes in Syria.

“The removal of Zehra Duman’s citizenship has left her children with an invidious choice: Remain with their mother in war-torn north-east Syria or leave their mother behind and try to assert their Australian citizenship,” acting CEO Mat Tinkler told The New Daily.

“Global evidence is clear. Except for extreme cases, it’s almost always in the best interest of a child to be with their parents.

“However, given the extreme context in north-east Syria, if there are immediate family members in Australia who are ready and willing to provide care for Zehra Duman’s children, Australia may be a better outcome for them.

“These children are innocent and deserve to be safe.”

“There are 8,704 foreign children from more than 40 nationalities in these camps. We are worried about every one of them” says Save the Children's Sonia Kush @Beltrew @Independent #StopTheWarOnChildrenhttps://t.co/BtVGsg8KYp

While the refugee camp the 66 Australian women and children are living in is outside the corridor Turkey plans to seize from the Kurds, there are concerns over what will happen if the refugee camp guards abandon their posts.

The charity also revealed it repeatedly warned Australia to get the children out of the camps months ago, amid concern the US would pull out troops.

“Save the Children and families in Australia have advised the Australian government for many months that the relative stability of the Kurdish-controlled parts of north-east Syria at the time represented the best available window to repatriate Australian women and children,” Mr Tinkler said.

Kamalle Daboussey, whose daughter Mariam is trapped in the camp with her children, said there was enormous anxiety about what was going to happen next.

“It has been quiet. But there’s a lot of anxiety. The girls in the camp are anxious. Of course the families here in Australia are anxious,” Mr Daboussey said.

Save The Children appeals for rescue of infants from Syria, leaving behind ISIS brides