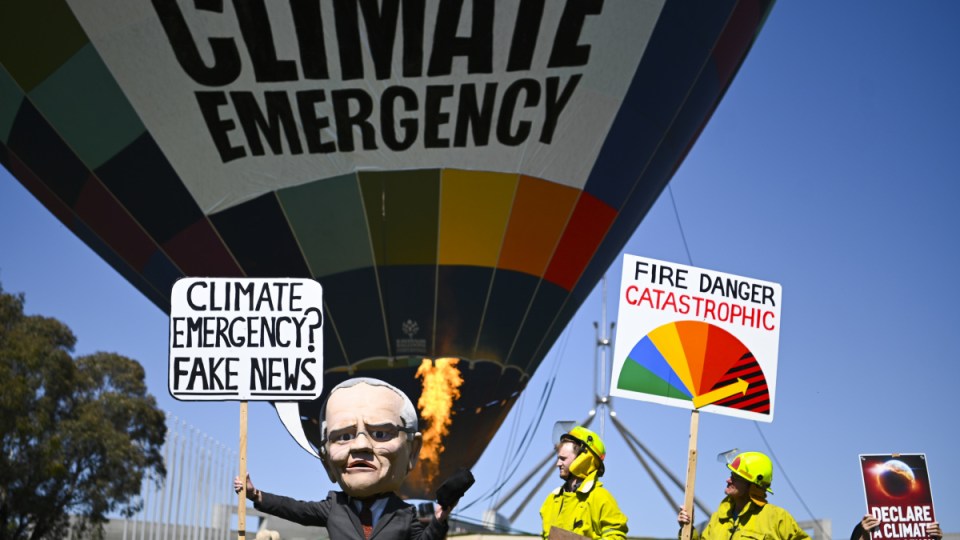 Labor has declared a “climate change emergency” on the same day that Anthony Albanese confirmed his party is in no hurry to finalise a new emissions reduction target.

The Opposition Leader on Tuesday confirmed a new 2030 target will be finalised closer to the next election when the trajectory of emissions reductions at the time is clear.

Mr Albanese defended the decision on the grounds he didn’t want to let the Morrison government “off the hook” for failing to meet its targets.

The next election is not scheduled until 2022, leaving a long timeframe to settle the policy amid a split in ALP ranks.

Frontbencher Joel Fitzgibbon has angered some colleagues by calling on the ALP to dramatically scale down Labor’s 45 per cent by 2030 target to 28 per cent.

The strategy is designed to switch the focus to the government’s failure to meet its emissions reduction targets.

Asked if he shared his colleagues’ concerns with Mr Fitzgibbon’s calls to scale back the ambitious targets, Mr Albanese sidestepped the question.

“Labor’s next emissions reduction target will be consistent with the science,” he said.

Asked what that meant, he replied: “I don’t attend faction meetings.

“And one of the things that I want to do though, is to not let the government off the hook and say what Labor should do in three years’ time.

“Emissions are going up now. Obviously, the first chance that we have to be elected to office will be after the next election, sometime between October 2021 and March 2022, is when I expect it to be.

“That’s the window. So at that point in time, from that base, it will be much worse if the government doesn’t actually have an energy policy.”

“The future is at stake – we are in a climate emergency,” Mr Butler said.

At the same time that Labor is joining our #ClimateEmergency declaration, in the Senate they’re opposing our moves to say there should be no new thermal coal mines in Tasmania.
I’m glad they’re now on board with declaring a CE – but this needs to be matched by policy w substance

“Labor is making a huge song and dance about declaring a climate emergency, yet refuses to commit to a single climate policy it took to the election,” Mr Taylor said.

The Prime Minister turned the attack back on Labor in question time, suggesting Mr Butler was losing the battle for the hearts and minds of his colleagues.

“He is losing the argument on that side, because on that side, they are not for responsible emissions reductions targets, which is what we take to the election,” Mr Morrison said.

“They are for reckless targets which lose people’s jobs.”

We just narrowly lost a vote on our climate emergency declaration, but we’ll keep coming back until Parliament tells the truth.

Help us keep the pressure up on wavering MPs by signing the petition https://t.co/oFGwiVQQT4 https://t.co/rU9FX9phRT

“Obviously, as time goes on it gets more difficult. We may not win the next election. I hope not, but we may need to look at other timeframes,” he told The New Daily.

“We are going to miss our Paris targets and no amount of chit chat from the government can disguise that.”

Labor also announced a backlip on the Liberals’ “big stick” energy reforms that it opposed at the last election.

As a last resort it would allow the government to force companies to divest assets. Labor agreed to back the proposals following guarantees on privatisation.

“The big stick bill will do nothing to provide the policy certainty needed to support investment in clean, reliable and affordable power, which lies at the heart of the energy crisis,” Dr Chalmers said.

“As a result, power prices will continue to go up and up and up.”

‘We should respond to the science’: Labor declares climate change emergency but delays 2030 target