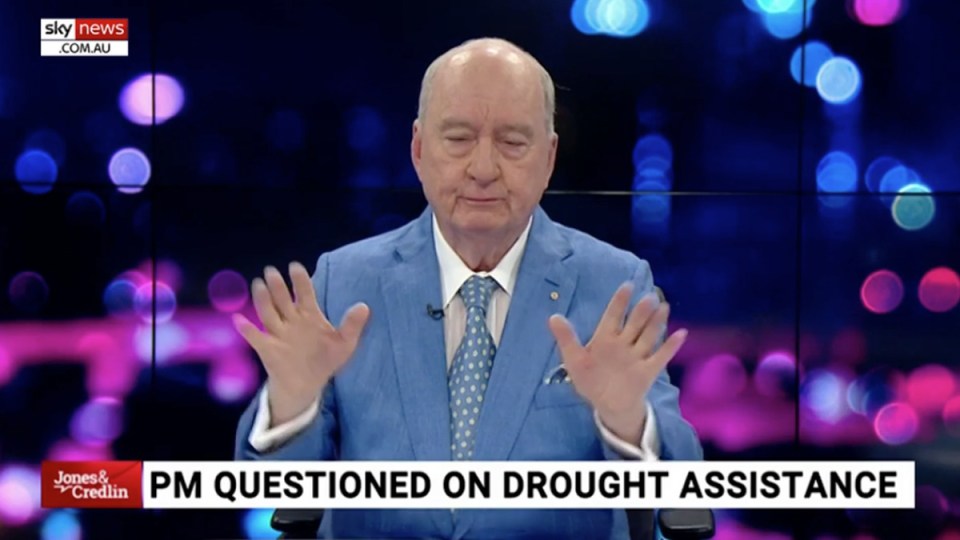 Broadcaster Alan Jones has broken down in tears on his television program as he paid tribute to farmers battling the drought and lashed the Morrison government’s response.

“Drought and the farmer are now a massive political issue,” Jones said on Tuesday night on Sky News.

“Yet in question time today, it was as if the drought didn’t exist.”

Following his fiery interview with Prime Minister Scott Morrison earlier in the day, he accused him of not understanding the plight of farming families.

“We will fight, because I have been exactly where the people of Bourke are.

“My old man would be ashamed of me if I didn’t fight.”

Mr Jones then broke down in tears as his co-host Peta Credlin reached out to him and he cut to a commercial break.

Earlier, Mr Morrison was savaged by Jones and his talkback callers as “full of crap”, “off with the fairies” and an “arrogant bloviator”* over his response to the drought.

The PM was first taken to task by Jones over his failure to do more for farmers – and then attacked by callers.

But he warned there was no “magic wand” or “cash splash” that could make it rain.

“The government, whether it’s state, federal or anyone else; we can do a lot of things to help people try to get through this. But the government cannot make it rain,” Mr Morrison said.

“The government can’t make life as it was before the drought.

“We want the farmers and the communities to be able to get through this drought, but we can’t kid ourselves that there is a magic wand and a magic cash splash that is going to make this thing totally solved.”

Jones told the PM he accepted he was “committed to dams or whatever”.

“Some of these farmers won’t be alive when that happens,” he said.

Jones then played a caller, Mark, who said: “I’m calling because at the last election I voted for Scott Morrison. I voted for him because I thought he was our hope. I’m out here in the back of Bourke, mate. Our river is going to be dry at the end of December. I’ve got four kids and three of them have moved away because we’ve got no hope out here.”

Mr Morrison revealed he rang Mark, who runs the local swimming pool in Bourke, on Monday.

“His dad is the mayor. He left the land four years ago,” he said.

“I took him through all the things that I just talked to you about. And he wasn’t aware of those things. Now Alan – if you could let me finish – I spoke to him at some length.

“I took him through all the things we were doing, from the issues on water infrastructure through to the supports on Farm Household Allowance and the changes we’ve made to it, how much we’re investing in that in the community.

“His dad, who is the local mayor, said that the money we put into Bourke Shire, they were very grateful for. We put a million dollars that they’re going to spend on upgrading his swimming pool next year. And at the end of the conversation, Alan, this is what he said to me – he said ‘this is the hope I was looking for, Scott’.”

But Jones said farmers were sending breeding cattle to be slaughtered and cash assistance and counselling was not enough.

Mr Morrison said that of the $300 million spent on drought measures in the past year, about $15 million had gone to helping farmers with dealing with pests and weeds.

Mr Jones then interrupted and said, “PM, don’t talk to me. I’m a farmer’s son, you’re not.”

The PM went on the radio to talk about the drought. Safe to say people didn't like what they heard. pic.twitter.com/i5ZycPmjns

According to 2GB, talkback callers “went into meltdown in response to the Prime Minister’s interview”.

One was caller Michelle, who said Mr Morrison should resign.

“I’m a dairy farmer’s daughter. That interview should sign the end of his prime ministership. Just absolutely diabolical,” she said.

Another, Robert, said the PM was arrogant and a failure.

“My blood’s boiling after hearing that. Complete failure as a prime minister. He’s arrogant. They’ve been conning the public after the election,” he said.

Another caller complained, “I felt like putting my fist through the radio listening to Scott Morrison this morning.”

* “Bloviator” is a 19th-century word that means someone who talks at length, especially in an inflated or empty way.

Alan Jones left in tears, after talkback callers savage ‘off with the fairies’ PM on drought