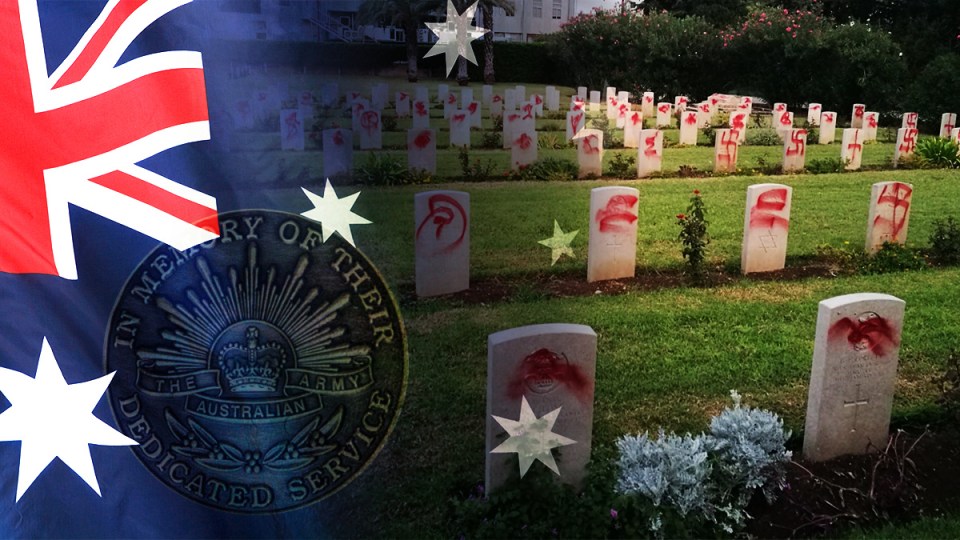 Australian war graves were among the dozens covered in anti-Semitic messages in Israel. Photo: CWGC

Up to 16 graves of Australian diggers were among dozens spray-painted with swastikas in a disturbing anti-Semitic attack overseas, it can be revealed.

Israel has called the attacks on the cemetery in the city of Haifa an “abhorrent” hate crime, as the country’s Prime Minister Benjamin Netanyahu vowed the perpetrators would be brought to justice.

It follows recent attacks on graves across New South Wales and Victoria.

The New Daily has also confirmed graves of Australian soldiers who died in the First and Second World Wars are not being monitored by security cameras.

Graves of soldiers from Commonwealth countries are found at 23,000 locations across the world.

None of the sites have been fitted with CCTV, with Commonwealth War Graves Commission hopeful in the past that nobody would stoop so low as to damage memorial sites.

The security of Australian war graves has been under question at a local council level amid spates of vandalism.

In one recent case in September, the Shoalhaven City Council on the NSW south coast said it would consider security options as part of a CCTV review after the destruction of five military servicemen’s graves at Nowra.

A spokesman for the Commonwealth War Graves Commission told The New Daily the attacks – believed to have been confined to Plot B in a secluded part of the Haifa cemetery – were being treated with the “utmost seriousness” by Israeli authorities.

“Our message to the Australian people, and particularly to those who may be related to any potentially affected graves is this … We share your anger and sorrow, but we will never allow such acts to sully the memory of these brave individuals,” the spokesman said.

“We will restore the graves to a standard befitting their sacrifice and will continue to honour their memory forever.”

It’s believed no particular nationality was singled out. There are 29 Australian graves at the site, including 16 in the targeted area.

Police were first called on Friday when the graves were discovered covered in red paint.

It has since emerged that some of the headstones had also been kicked or smashed.

Police are investigating the damage to the affected grave sites, and it is expected relatives will be informed of the damage.

“The desecration of the graves of the World War I heroes in Haifa is an abhorrent crime,” Mr Netanyahu said in a statement.

“We owe these soldiers a historical debt for the liberation of the Land of Israel from Ottoman rule.”

The Haifa War Cemetery is the burial site of about 340 Commonwealth soldiers, most of whom were killed during World War I.

Jewish leaders in Australia fear hate crimes are on the rise – and it seems the statistics back up their fears.

Australia experienced an unprecedented 59 per cent increase in anti-Semitic attacks last year, according to a report by the Executive Council of Australian Jewry.

Last week, Treasurer Josh Frydenberg urged for students to be taught more about the Holocaust following revelations of disturbing bullying of schoolchildren.

“(It is) nothing other than just hate-filled desecration of our own diggers, our light horsemen and it is terribly upsetting,” Mr Morrison told reporters during his brief visit to Suva.

It had earlier emerged in Jewish community press that a five-year-old Victorian schoolboy was allegedly called a “Jewish cockroach” while a 12-year-old Jewish student was allegedly forced to kneel before a Muslim classmate and kiss shoes.

Other instances have included swastikas being scrawled across election material in Victoria and NSW, and on a poster advertising a play about diarist Anne Frank, whose family took refuge from the Nazis in Amsterdam.

Mr Frydenberg, whose Jewish mother fled Hungary to escape the Holocaust, has also been the target of graffiti attacks this year.