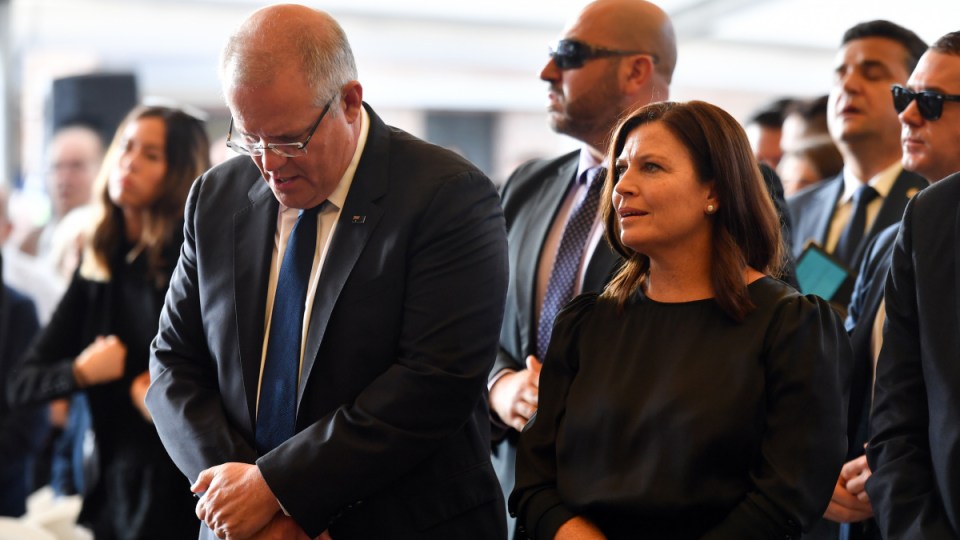 Scott Morrison in church during the election campaign. Photo: AAP

Scott Morrison has hailed the power of prayer to tackle drought and natural disasters and the work of a US bestselling author and pastor who teaches disciples that sex outside of marriage is “a sin”.

The Prime Minister discussed his own daily rituals of prayer at a breakfast in Canberra this morning where he also spoke of his belief in miracles.

“Thank you also to all those who offered such wonderful prayers here this morning; they were truly moving as we covered such an array of topics,” Mr Morrison said.

While Christians are sometimes painted as “pious”, Mr Morrison said that could not be further from the truth.

“What I like about prayer and what is so important about us coming together in our Parliament and praying, is prayer gives us a reminder of our humility and our vulnerability, and that forms a unity,” he said.

“It is one of the great misconceptions, I think, of religion that there’s something about piety. It is the complete reverse – the complete reverse. Faith, religion, is actually first and foremost an expression of our human frailty and vulnerability and an understanding that there are things far bigger than each of us. And so when we come together in prayer we are reminded of that, and we are reminded that the great challenges we face in this world are ones that we need to continue to bring up in prayer.”

Mr Morrison said he had cause to reflect on prayer in the United States when he was welcomed at the White House with his wife Jenny.

“I often talk about miracles being founded in prayer and recently I was in the United States – and I welcome Ambassador Culvahouse here this morning – and I was there with Jenny, and I can report that Jenny and I did meet at a Christian camp,” he said.

“We were very young and we were there, and as we were heading into the South Lawn of the White House, I turned to Jenny and said, ‘We’re a long way from the Central Coast now, darling.’”

During his remarks, the Prime Minister also reflected on his visit to a “wonderful church”, the National Capital Community Church, the Church of Pastor Mark Batterson.

“He’s written a wonderful book on prayer which they gave me and I’ve been reading it since I’ve come back and where he talks about the only prayers that you can be assured are never answered, are the ones that are never prayed. I think that’s true and it’s a reminder of the importance of prayer,” Mr Morrison said.

Pastor Batterson is an award-winning New York Times author who has argued “manhood” is devalued in western society.

“Somewhere along the way, our culture lost its definition of manhood, leaving generations of men and men-to-be confused about their roles, responsibilities, relationships, and the reason God made them men,” he writes.

In another sermon, he discussed why homosexuality is a sin.

“Not long ago I officiated a wedding in a church that had a plaque hanging on the wall that said they ordain homosexual clergy. It was a very visible legitimisation of homosexuality,” Pastor Batterson said.

“Having said that let me say this: we live in a society where it is wrong to say something is wrong. And that’s wrong. And we need the moral courage to tactfully, thoughtfully, and gracefully speak the truth in love. We ought to be more concerned about being biblically correct than politically correct. So here is the biblical bottom line: sex outside of marriage is wrong. Sex is a sacred covenant between a husband and a wife. Period.”

During the election, Mr Morrison was asked several times if he believed that gays got to hell.

He ultimately released a written statement.

“It was a desperate, cheap shot from Bill Shorten who is looking to distract attention from his housing tax that will undermine the value of people’s homes.”

Mr Morrison also told the prayer breakfast that the daily ritual of prayer was important to him including in Parliament.

“It’s a good reminder that after the quietness and stillness of prayer, the chaos and disorder sometimes follow – let that not be the case this week. God bless,” he said.

PM acclaims power of prayer and work of conservative pastor