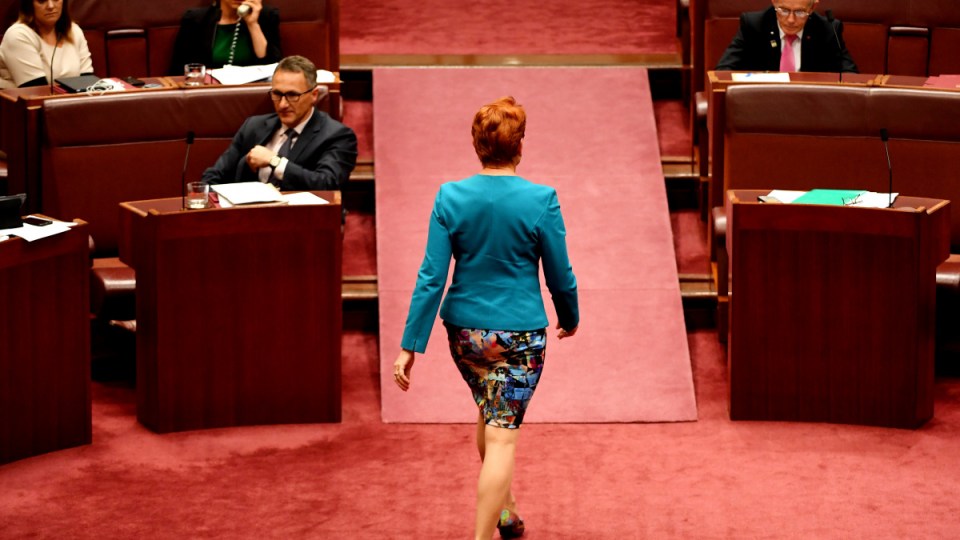 One Nation leader Pauline Hanson says she won't vote on "non-critical" legislation until the government gives in to her demands. Photo: Getty

Pauline Hanson has gone on a Senate strike, saying she will not vote on any “non-critical” legislation until the Morrison government steps in to save dairy farmers.

“Until we sort out the dairy industry in this country and look after the farmers that are desperately needing our help…[the government is] not going to get my support,” Senator Hanson told Sky News on Monday.

Pauline Hanson’s One Nation, which controls two key crossbench votes in the upper house, is demanding the diary industry be re-regulated amid intense pressure on producers due to farm gate prices.

One Nation senator Malcolm Roberts confirmed he would adopt his leader’s position during debate on a bill to make it easier for first-home buyers to enter the market.

“In support of Senator Hanson’s decision to not vote on legislation other than critical legislation until the government has addressed the plight of dairy farmers, I will not be voting on this bill,” he told parliament on Monday.

Senator Hanson said she planned to put forward a private member’s bill about re-regulating the dairy industry, amid claims major supermarkets were failing to pass on recent increases in milk prices to their suppliers.

She also called on Prime Minister Scott Morrison to “show leadership” on the issue.

“Get your head out of the sand and start doing something for the farmers of this nation,” she said.

The federal government has previously rejected proposals to re-regulate the industry.

On Monday, Agriculture Minister Bridget McKenzie said the government was focused on making sure dairy farmers were making a profit at the farm gate.

She said the final draft for an industry code of conduct was being done, with a view to a third and final round of consultation before the end of the year.

“What the dairy farmers need is competition for their product,” she said in Senate question time.

Senator Hanson accused the government of waiting for a mass exodus of farmers from the industry before acting.

But Senator McKenzie rejected that.

“Our government has been taking steps to stand by our dairy farmers and the industry more broadly over many years,” she said.

Senator Hanson wants the code to be retrospective so farmers can renegotiate contracts after it comes into effect.

Before the election, Labor pledged to get the Australian Competition and Consumer Commission to investigate the best way to establish a minimum farm gate milk price.