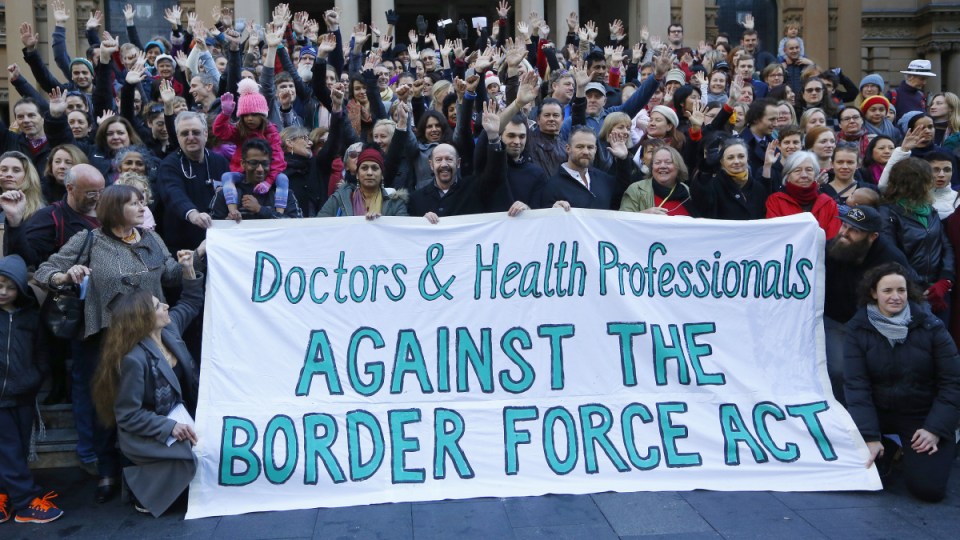 From the Border Force Act to Medevac, doctors have been on the front line of protests against Australia's treatment of refugees. Photo: AAP

Doctors are being urged to keep fighting against Australia’s mandatory detention of refugees as the nation’s peak medical bodies unite in support of under-threat Medevac laws.

Australian doctors must continue a campaign of “civil disobedience” and “non-violent direct action” against the federal government’s mandatory detention policies, the authors of an article published in the Medical Journal of Australia on Monday said.

“Clinicians have played a central role in bringing to light the conditions in which people are detained through both testimonies to inquiries and whistleblowing,” the University of Sydney’s Dr Ryan Essex and Professor David Isaacs wrote.

“Professional bodies have long called for reform. Clinicians have lobbied, marched and protested against these [mandatory detention] policies.

“Almost 6000 Australian doctors signed an open letter calling for the evacuation of all children from detention on Nauru before they were eventually evacuated.”

The government attempted to silence doctors shocked by conditions in offshore detention centres with the introduction of the Australian Border Force Act in 2015.

The Act barred anyone working with the Border Force from revealing “protected information”, or face two years in prison.

In 2016, Professor Isaacs – a paediatrician who had visited Nauru – challenged the Prime Minister to prosecute him for speaking out about “torture-like conditions”. However, no charges were laid.

“After the introduction of the Australian Border Force Act 2015, many clinicians saw civil disobedience as their only option, publicly
challenging the government to prosecute, while continuing to speak out,” Professor Isaacs and Dr Essex wrote.

“Clinicians have also defied the government in refusing to discharge children from hospital if they will be returned to Nauru.

“Others have taken action to address the well-documented failings of health care offshore by reviewing medical records and advocating for
treatment.

“In many cases, clinicians have acted in partnership with the media to amplify their message.”

Doctors defying the government’s policies have had a “substantial impact”, but more work is needed, Professor Isaacs and Dr Essex warned.

The Nauruan government recently passed legislation threatening the viability of the Migration Amendment (Urgent Medical Treatment) Bill (2018) – known as Medevac – with the legislation also under attack from the Morrison government.

Medevac allows independent medical experts to assess ill refugees and asylum seekers, and have them transferred temporarily to the mainland for medical treatment if required.

The Morrison government is seeking to overturn the laws, with a federal parliamentary committee preparing to release a report from its inquiry into the Medevac repeal bill this week.

On Sunday, Australia’s 11 leading medical colleges united in their support of Medevac legislation and the Independent Health Advice Panel (IHAP).

The expert bodies urged Parliament to maintain the legislation and the Independent Health Advice Panel (IHAP) that supports the process.

“Every person should have access to necessary and appropriate medical care and, as clinicians, we have a duty to uphold this basic human right,” they said in a joint statement.

They believe the legislation has improved access to appropriate healthcare for refugees and asylum seekers being held offshore.

“It allows medical experts to make decisions about health care for seriously ill individuals and ensure that they receive the medical treatment that they need in a clinically appropriate timeframe,” they said.

Australian Medical Association (AMA) president Tony Bartone said the AMA had consistently proposed and supported the need for a body of clinical experts, independent of government, with the power to investigate and advise on the health and welfare of asylum seekers and refugees.

Those who are in the care of the government, whether seeking or granted asylum, have the right to “receive appropriate medical care without discrimination, regardless of citizenship, visa status, or ability to pay,” Dr Bartone said.

“Over the last couple of months, I have met Home Affairs Minister Peter Dutton, and the Home Affairs Department chief medical officer Dr Parbodh Gogna, to reiterate the AMA’s strong support for Medevac and the ongoing work of IHAP,” Dr Bartone said.

“Asylum seekers and refugees in Australia or in offshore detention, in the care of the Australian government, should be treated with compassion, respect and dignity.”

Labor also weighed in with its support for Medevac.

“We stand with the doctors in noting that Medevac is ensuring that people who are sick are able to get the medical treatment that they need.”