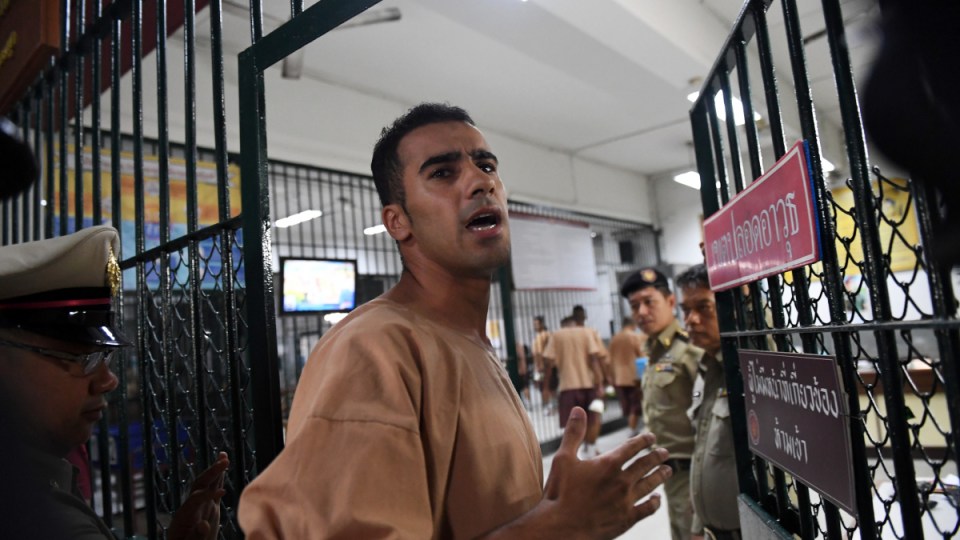 Hakeem al-Araibi fears torture and even death if he is returned to his homeland. Photo: Getty

The Australian government considered cancelling the protection visa of a refugee arrested by Thai authorities, it’s been revealed.

Documents obtained under Freedom of Information by the ABC reveal a trail of bureaucratic bungles that led to the overseas arrest of Melbourne footballer Hakeem al-Araibi on an Interpol Red Notice issued by his home country of Bahrain.

A Red Notice alerts police worldwide about internationally wanted fugitives but as a refugee, Mr al-Araibi should never have been on the list.

The Department of Home Affairs told Interpol’s Canberra office to cancel the Red Notice but the advsiory went unread for five days, the documents show.

Instead, as the couple boarded their flight to Thailand, where they were spending their honeymoon, and INTERPOL’s Canberra office told colleagues in Thailand and Bahrain that Mr al-Araibi was leaving the country.

When they touched down, around 20 police stormed the plane to arrest him.

“I can’t describe how I was feeling. I was scared,” he told the ABC of his arrest.

“I told them I am not Bahraini now. I am Australian. I have Australian travel documents. You’re not allowed to stop me because I have a protection visa,” he said.

The then-25-year-old was imprisoned for 77 days, facing extradition to the country that tortured him, because border officials failed to inform other Australian authorities that Mr al-Araibi was under protection.

Speaking to the ABC, Mr al-Araibi, now an Australian citizen, said they should have told him he was the subject of a Red Notice.

“They should respect the refugee, respect the people who need protection … if they told me, nothing would have happened,” he said.

After Mr al-Araibi spent his first night in prison he reached out to authorities back home to help him.

But instead of help, they hindered the process – spurred on by a lie the Bahrainis were telling them.

Interpol had been warned by Bahrain that Mr al-Araibi had left the country on what appeared to be a fraudulent passport.

Interpol – via the Australian Federal Police – was then told by the Home Affairs department it was a legitimate travel document and he was on a protection visa, but the email went unread for five days.

Home Affairs then considered cancelling Mr al-Araibi’s visa based on the Red Notice.

Craig Foster, the former Socceroos captain, said he was staggered by this revelation.

“It’s really concerning because it meant that he was placed at even greater risk than he should have been and it’s not acceptable.”

It was already known Australian Border Force officers failed to warn the AFP and Home Affairs that Mr al-Araibi was under protection, something Home Affairs minister Peter Dutton described earlier this year as an “innocent” human error.

It was INTERPOL France’s Office of Legal Affairs that first noticed there may be an issue with the initial red alert.

After reading about Mr al-Araibi’s refugee status the OLA contacted the Australian office to clarify.

When that clarity came the red notice was cancelled by INTERPOL France within 24 hours but it was too late for Mr al-Araibi as a judicial process was underway into his potential extradition.

He spent a further 70 days in prison.

Lobbying from human rights groups, the Australian Government and people like Mr Foster eventually put enough pressure on the Thai government for them to terminate the proceedings.