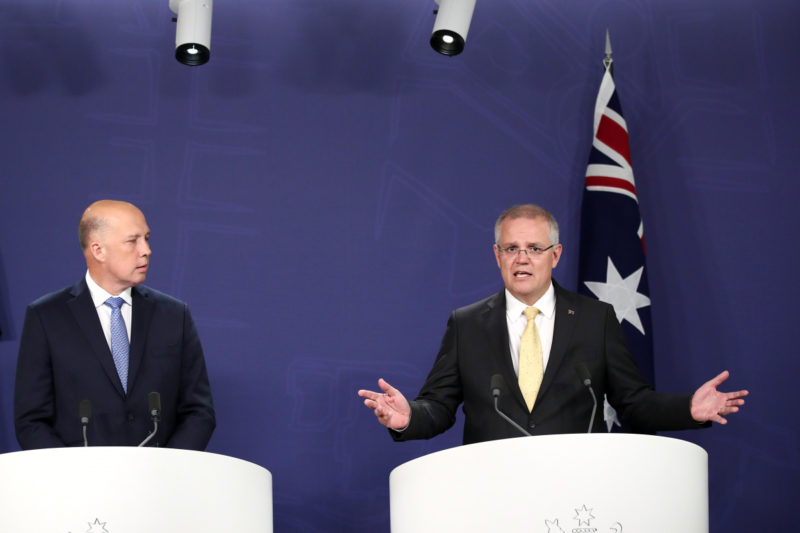 Australia’s ISIS brides – including alleged recruiter Zehra Duman – are as “hard core” as the men and could pose a terror risk at home, Home Affairs Minister Peter Dutton says.

Warning that the women and their families should not expect Australia to put its military in harm’s way to save them as Turkish forces advance towards the refugee camps, Mr Dutton said they had made their own decision to “destroy the lives of your children”.

The New Daily revealed this week that Ms Duman, a Melbourne-born mother of two, was stripped of her citizenship based on “conduct’ offences by being a member of a declared terrorist group.

Mr Dutton said some of the women had “the capacity and the potential to come back here to cause a mass casualty event”.

“The advice in relation to some of these women is, far from being dragged there by their husband or boyfriend, they’ve gone willingly and/or they are as hard core as some of the male terrorists,” Mr Dutton told 2GB.

“I don’t think it should come as any surprise to people when we say that we’re not going to send our soldiers or our staff through the foreign affairs department or my department into harm’s way to rescue people of this nature,” he said.

But he flagged there may be exceptions that Australia will move to repatriate home.

“We’re looking at individual cases, and in some cases, it may make sense for us to intervene. But in the majority of cases I think people realise that if you go into a war zone and you take your kids into a war zone, that’s a decision you’ve made as a parent.

“The fact that you made a decision to destroy the lives of your children, that’s something you’ll have to live with. But my job is to protect kids back here and make sure that Australians are as safe as possible.”

It’s believed 17 dual nationals have had their Australian citizenship stripped since 2015 and the group includes at least three women.

“These are people that would, in our judgment – not all of them but some of them – have the potential and capacity to come back here and cause a mass casualty event,” Mr Dutton said.

More than 40 children and around 20 women remain in the al-Hawl camp in northern Syria and are increasingly terrified they may be used as human shields as the Turks prepare to advance on the women’s Kurdish captors.

It remains unknown how many of the mothers who remain in Syria have already had their citizenship secretly cancelled.

Prime Minister Scott Morrison said the Australian children of these women would not have their citizenship automatically revoked.

“My advice is that the citizenship of children of those for whom their citizenship is cancelled … is unaffected,” Mr Morrison said.

But the situation for Ms Duman is more complex because she is believed to have had both children after ISIS was declared as a terrorist organisation in 2016.

Her lawyers are concerned that means she has not been a citizen for three years, potentially before the birth of both children.

That means both children could have lost their right to claim citizenship by descent and will only be able to apply if the family can legally prove their fathers remained an Australian citizen at the time of their birth.