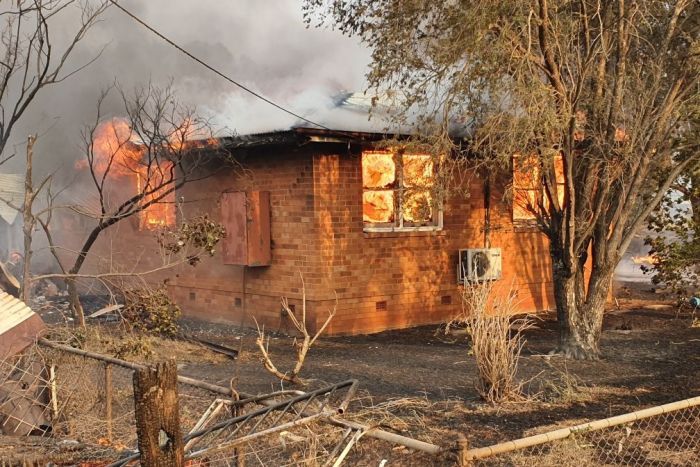 Up to 20 homes have been lost at Busbys Flat, NSW. Photo: ABC

A Queensland father who swung from a Brisbane bridge for more than eight hours was protesting the impacts of climate change on bushfires as up to 30 homes were destroyed or “seriously damaged” in the latest outbreak.

A heartbroken Paul Jukes, 49, said the recent Binna Burra bushfires in Queensland destroyed the memorial for his wife, who died when his daughters were very young.

The personal protest, which is part of a week-long action by environmental group Extinction Rebellion, came as many as 30 properties were lost in an out-of-control bushfire in the area around Rappville and Ewingar in northern New South Wales. The engineer and experienced rock climber from Airlie Beach spent most of Tuesday dangling in a hammock about 10 metres underneath Brisbane’s Story Bridge, about 50 metres above the river.

He eventually climbed out of his harness and handed himself in to police.

“She asked (for) her ashes to be scattered in Lamington National Park and a memorial was set up and it just burnt,” Mr Jukes said.

“My daughters have lost that connection to their mother.”

Mr Juke’s was one of a number of public demonstrations held across the world as activists called for more government action on climate change.

His drastic action came as Australia prepares for possibly one of the worst bushfire seasons on record.

The NSW Rural Fire Service said between 10 and 20 homes and buildings in the village of Rappville, with a population of around 250 people, were destroyed when fire ripped through the town.

Newcastle City Councillor Carol Duncan said her father and his partner had lost “absolutely everything” except the “clothes on his back” in the bushfire.

“My father’s home has been destroyed. Everything is gone. Please help if you can,” she wrote on Twitter.

“He has nothing. He’s been a battler his entire life. And what he did have is now a pile of ashes. I feel utterly helpless.”

In a GoFundMe she set up for him, Ms Duncan  described her 83-year-old father as ‘a classic pensioner battler’ who had recently survived lung cancer.

“When I spoke with Dad after they’d taken him to the school, he told me they’d ‘lost everything but the shed’. But I now know that the shed was also incinerated,” she wrote.

“We might have saved the second place but everything else has gone.”

Overnight, an emergency warning was issued for Carneys Creek, west of Beaudesert, in Queensland.

Temperatures in the Lockyer Valley, west of Brisbane, reached 41C on Tuesday as gusty, westerly winds fanned a dangerous bushfire that threatened the township of Thornton.

Residents were told to evacuate as the blaze burned in a northerly direction from the Glen Rock National Park towards Main Camp Creek Road.

Laidley, a small town southwest of Brisbane, was in total emergency lockdown with Queensland Fire and Emergency Services (QFES) warning that it was too late to leave home.

The fast-moving fire forced the evacuation of 60 homes and it’s believed at least one house was lost in the blaze.

However there is some potential relief in sight.

Cooler temperatures will begin to ease bushfire conditions across Queensland’s southeast corner from Wednesday, with forecasters even predicting rain by the end of the week.

Bureau of Meteorology’s Senior Meteorologist Vince Rowlands said the fire danger in the southeast corner will drop from severe to very high some areas could even receive rain by Friday, with falls of up to 40mm possible on Saturday.

“There is potential there for some relatively good falls,” Mr Rowlands said.

However most of the state will remain tinder dry.

Police have declared an emergency situation at #Laidley this afternoon due to a developing bush fire threat.
If you are in the area, leave immediately if it is safe to do so. If you are outside the area, do not try and enter.
More: https://t.co/2QwnbzQKNP pic.twitter.com/xdF0cTF7xr

On the north coast of NSW, a bushfire was threatening Tenterfield for the second time in a month.
By 2pm, the NSW Rural Fire Service had issued an emergency warning for the fire burning near Kildare Road, just four kilometres west of the town.
They were downgraded shortly before 8pm.

In Melbourne, far from the threat of bushfires, about 200 Extinction Rebellion members walked onto busy intersections in the CBD and stopped traffic to demand urgent government action on climate change.

“When the traffic lights say walk, we all go out with our flags at the same time and stay there to hold up the intersection,” Veronica Curmi told The New Daily on the steps of Parliament House.

“We had music and dancing in the street and we handed out information.”

Ms Curmi said the police arrived within five minutes of the blockade and removed about 40 protesters.

“They try and make us look like we’re the dangerous ones … we’re portrayed as weirdo, radical, dangerous types who stop traffic and disrupt the system but it’s the system that’s destroying our planet,” she said.

“We’re just ordinary people who care about the planet because it’s the only one we’ve got.”

Bushfires rip through NSW, Qld while a bereaved husband takes a stand