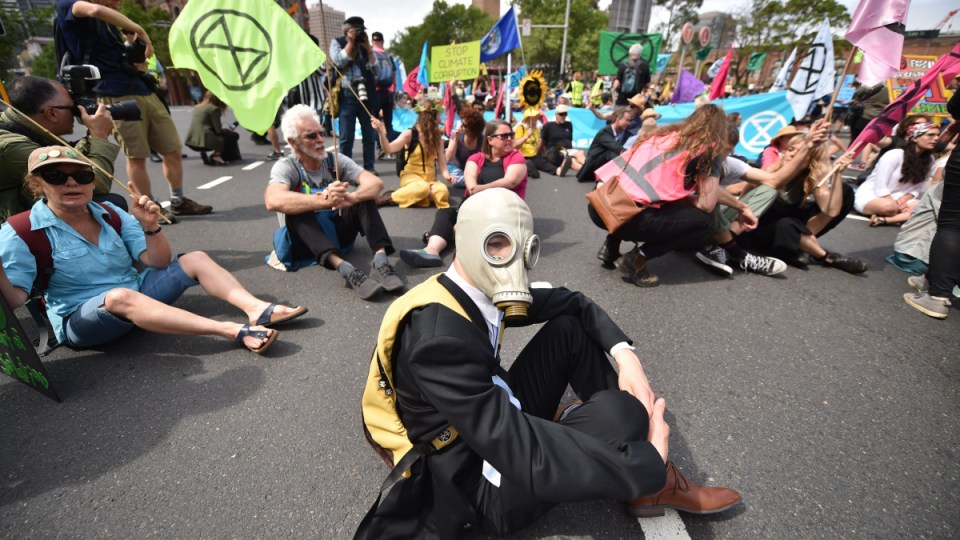 A former Greens senator who was arrested in Sydney during a climate change protest says shutting down the demonstrations is like turning off the smoke alarm in a burning building.

Scott Ludlam was one of 38 people arrested on Monday as Extinction Rebellion protesters blocked roads to draw attention to climate change and its consequences at the start of a week-long series of events.

Environmental activists say they’ll keep putting their freedom on the line and risk being arrested until the federal government declares a “climate emergency”.

Mr Ludlam – who was arrested as he sat on Broadway, one of Sydney’s busiest streets – will face court next month on a charge of failing to comply with a police direction.

The ex-politician on Tuesday described his bail conditions as “wild”.

He’s banned from taking part in any further Extinction Rebellion events and can’t be within a 2.5-kilometre radius of Sydney Town Hall.

“I strongly disagree with the prohibition on entering a public event, but the 2.5km just seems remarkable to me,” Mr Ludlam said.

The 49-year-old, who was bailed from police custody at 2.30am, added: “The case we are going to be putting to the court is that we are like the smoke alarm in a burning building.”

“Shutting down the demonstrations, arresting people, trying to destroy the ability of people to organise is the equivalent of turning off the smoke alarm in your house,” he said.

you can arrest us, lock us up, and call us names, but attacking the messenger won’t put the fire out. proud to stand with these beautiful people #RebelForLife https://t.co/3MEq3mKI6I

Protesters dressed as bees swarmed Hyde Park on Tuesday declaring a “beemergency” before walking to Town Hall for a further demonstration.

Michele Radinovic, 33, from Sydney was among those arrested on Monday.

Ms Radinovic on Tuesday said she was put in a “wrist-lock” and spoken to “quite aggressively” by officers. She was shocked by how protesters were treated.

“(But) I’m willing to put my liberty on the line for this,” she said.

“This is the biggest issue of our time.”

In a message directed at the police, she said: “I just want to remind them that we are peaceful and we’re doing this for our future, for their children’s future.”

The action was needed to “wake the public up”, Ms Radinovic added.

Peter Matthison – a bee-keeper and avocado farmer from the state’s mid-north coast – joined other farmers in Sydney on Tuesday to “demand our leaders take strong action on climate change so that we have a future in farming in this country”.

The 38-year-old was among a handful of people arrested shortly after the Hyde Park protest.

“As a farmer, I have no other option but to put my body and my liberty on the line,” he said before his detention.

“I will receive fines, I will get a criminal history which I’ve never had before, and I’m completely fine with that as long as we secure a safe future on this planet.”

Small jars of honey were handed out to drivers in a bid to sweeten the disruption caused.

Beekeeper Paul Hoskinson said they’d had “quite mixed reaction” from members of the public, with some supportive of the action while others “don’t want to have anything to do with us”.

Those arrested on Monday – aged between 19 and 75 – have been charged with failing to comply with a direction under NSW’s Road Transport Act.

The campaign group has planned an Australia-wide “Spring rebellion” running until Sunday including marches and other protests aimed at blocking traffic.