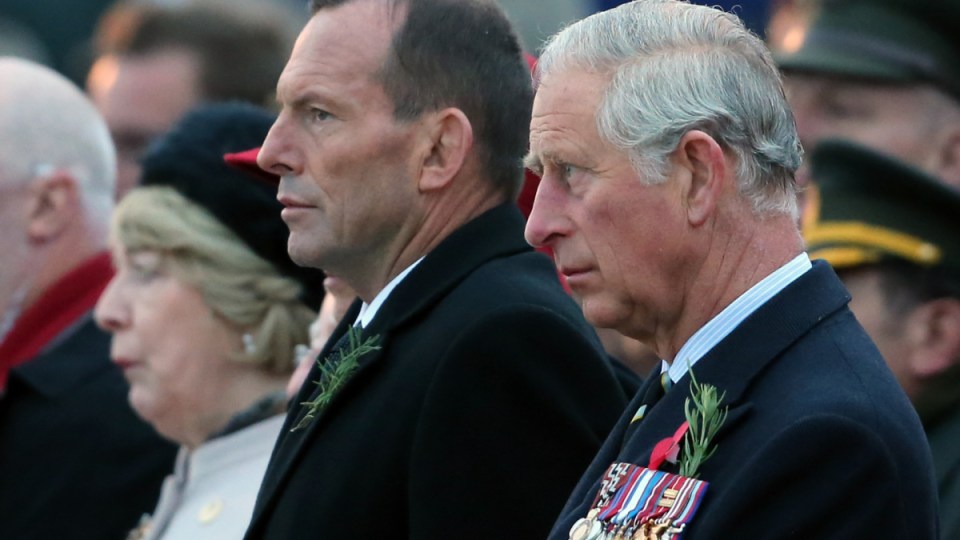 Then PM Tony Abbott with Prince Charles at Gallipoli in 2015. Photo: Getty

Australia’s “knight-mare” could be revived if Tony Abbott has his way, with the unrepentant monarchist revealing he would still like to bring back knights and dames.

Mr Abbott, Prime Minister at the time, announced the plan on March 25, 2014. It proved the ultimate barbecue-stopper as voters around the country, including his own MPs, seriously questioned his political judgment.

But it was Mr Abbott’s decision to award the Queen’s husband, Prince Phillip, a knighthood the next year that was dismissed as “a joke”, “a farce” and a “national disgrace.”

In an interview to mark the 75th anniversary of the Liberal Party, Mr Abbott has revealed he would do it all again, despite the “grief” it caused for his leadership.

“If we are going to have an honours system, I think that at the apex of the system we should have knights and dames,” he said.

“If you are a tradition-minded leader of a centre-right party, that’s exactly the kind of thing that you should do. At the heart of our centre-right tradition, it is not so much reform but restoration.”

The former PM has also threatened to re-enter federal politics after he was unceremoniously dumped by his northern beaches electorate at the last election.

“I’m not ruling it out but I’m not expecting it to happen,” he told The Australian newspaper.

Mr Abbott, who promised there would be “no sniping and no undermining” after he lost the leadership, also claimed that former prime minister Malcolm Turnbull white-anted him.

“It wasn’t that we had a divided government, it was more that there was one person who was determined to get to the top by hook or by crook,” Mr Abbott said.

“Malcolm always thought it was his destiny to be prime minister and I happened to be the obstacle to that and so he dealt with me as best he could.”

When he announced Mr Abbott plan to re-introduce royal honours, it was roundly ridiculed – including by Mr Turnbull, who was communications minister at the time.

“It is an interesting time to see the knights and dames coming back. It’s good to see the broad acceptance of it in the community today,” Mr Turnbull joked.

“So anyone who thinks this is some sort of slap at the republicans is really misjudging the prime minister’s commitment to looking after all Australians, and bringing us all together.”

When he took over as PM, Mr Turnbull, a republican, promptly scrapped the knights and dames awards as part of Australia’s honours system.

Last week it was revealed Mr Abbott would joining the board of the Australian War Memorial, in his first official appointment since leaving politics.

‘Unrepentant’ Tony Abbott would still like return to knights, dames