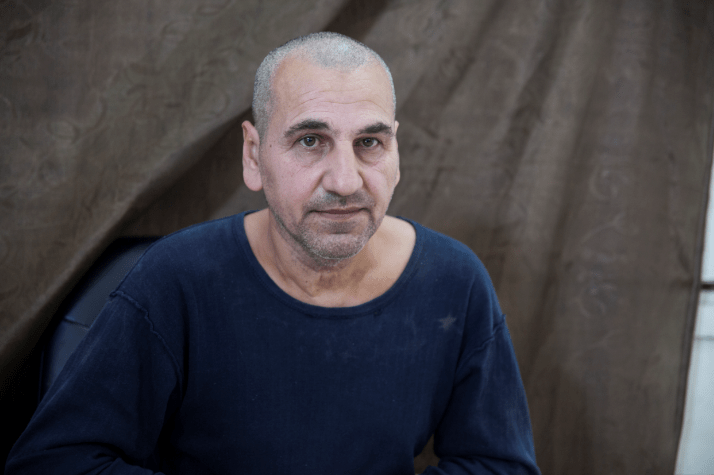 Gaunt and uncertain of his future, Ahmad Assad languishes in a Syrian prison. Photo: AAP/Tessa Fox

The Australian man is known as Ahmad Assad on his passport but when he came to Syria, ISIS gave him a different name.

“Here they take the father’s name and put it in the middle: Ahmad Mahmoud Assad,” he tells AAP.

The 51-year-old says he went to the region in 2015 to bring his sons back and became stuck, one of some 5000 foreigners from more than 50 countries being held in jails across northeast Syria since the fall of ISIS.

The number of Australian prisoners, either surrendered or captured from ISIS’s last stronghold of

in March this year, is unclear, though local news sources claim there are at least seven.

Brought into an interview room by soldiers from the Kurdish-led Syrian Democratic Forces, Assad wants news of his family: “What’s happening outside? With the women?” he asks AAP.

Wife Bassima, daughters Shayma, Maysa and Assia, and his grandchildren are being held in the overcrowded Al Hawl camp.
In 2015 Assad travelled with his wife and young children from Sydney to Syria and ended up “stuck” in ISIS territory.

The former Crown Security employee said the family travelled to the border of Turkey and Syria, via Lebanon, intending to meet his two sons who had allegedly “come to help the Syrian people”.

The two sons, Allah Qadeem and Abdul Khader, had called their father from Syria, prompting Assad to travel there. Both sons were killed by airstrikes on Raqqa.

“We went crazy. We were parents. We went ballistic,” Assad said of his reaction to his sons’ decision to leave their Australian homes for Syria.

“I was supposed to meet them in Turkey, somewhere near the border, and try to convince them to come back home,” he said. “It didn’t work out.”

A smuggler met the family instead, and guided them across the border until they reached Raqqa in Syria, once the “capital” of ISIS.
It was there the family was reunited.

“I told them (ISIS) I was just coming for a visit, they said there’s no visits … only migration,” Assad explained.

“They gave me a paper, an exemption, to stay in Islamic State as a citizen, I’m not allowed to carry any weapons, or talk on behalf of ISIS.”

During the year and a half Assad stayed in Raqqa, he said he did nothing but make sure his daughters were safe from the constant aerial bombardments.

When asked if he thought it would have been safer to leave his family in Australia, where Assad has two other older, married children, he said he realised that too late.

In the same year Assad and his family travelled to Syria, one of his daughters, only 15 at the time, married Australian Mohammed Masri.

Assad’s sons and Masri had apparently left for Syria together, having worked in the same profession in Sydney fitting air-conditioning and refrigeration.

“They were trying to fix the infrastructure of the people of Raqqa. They came for the same reason … it was all over the news … come and help us … people screaming, people dying,” Assad said.

Assad said Masri is now also in jail, adding that it was good to be alongside him because “he’s married to one of my kids”.

The prisons holding the thousands of men who emerged from ISIS’s last stronghold have become a major security concern for the Autonomous Administration of North and East Syria and the Syrian Democratic Forces (SDF).

SDF spokesman Mustafa Bali said troops must be positioned around all prisons to stop ISIS sleeper cells attacking and releasing those inside.

There is also a threat from within the prisons, as those still holding allegiance to ISIS have already demonstrated they can group together and try to break out.

“The people we have here, they are a threat to everybody,” Bali told AAP, referring to the prisoners.

“But the Australian government and the European governments are not doing anything to protect their people from (the) ISIS threat.”

Bali says the Australian government has not engaged in any talks designed to bring justice to their citizens currently in Syria, instead leaving the burden on the Autonomous Administration.

“It proves those governments have no realistic plan to fight against terrorism,” Bali said.

The Australia Ministry of Home Affairs did not respond to a request for comment from AAP.

Assad claims he never believed in ISIS “because (his) brain is not twisted to them”.

Through tears, he said he just wanted to go back to Australia and live a civilised life.

He was uncertain whether he would ever see his family again, and bowed his head when asked how he imagined they thought of him now.

“I probably failed (to protect my family). Please (tell the kids) I love them very much, I miss them a lot. Please do your best to take us out of here,” Assad begged.

“If the Australian government thinks we should be in prison in Australia, so be it.”

He took his family to live under ISIS rule, but jailed Aussie says it was all ‘a mistake’