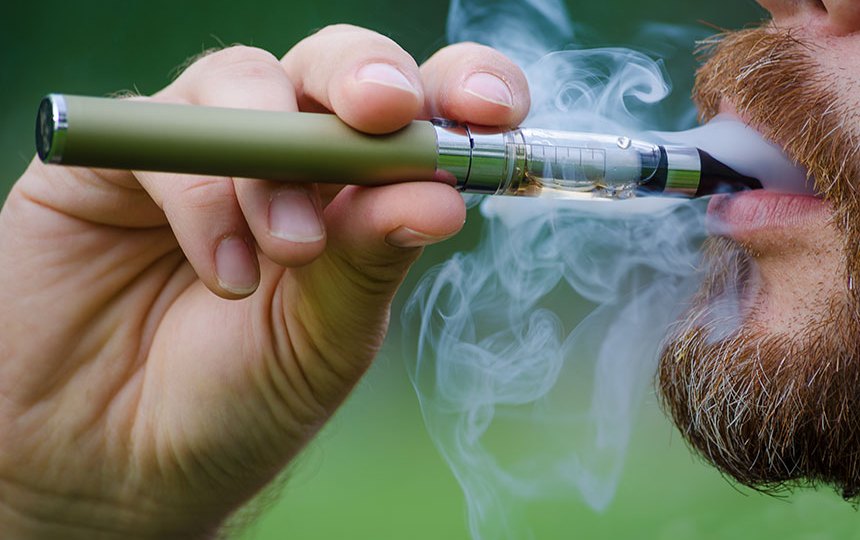 Some say vaping has helped them quit smoking, but experts have long warned it was too early to tell if e-cigarettes are safe. Photo: Getty

A rise in vaping-related deaths in the United States has divided researchers, smokers and health professionals about the potential health risks of e-cigarettes.

Two people have died in the past week from what authorities said were vaping-related illnesses, taking the death toll to 16 in the US.

But many smokers seem undeterred by warnings about chemicals in the devices.

Manufacturers continue to expand their product lines, and with flavours like strawberry, pancakes and even ‘unicorn puke’ [which tastes like sherbert, apparently] there are fears companies are trying to hook young tastebuds.

So what exactly are e-cigarettes, and should we be worried here in Australia?

E-cigarettes are battery-operated devices filled with ‘e-liquid’ – a substance consisting of chemicals made of either propylene glycol, vegetable glycerine or a mix – with a flavour added.

In Australia, it is illegal to buy vaping products with nicotine in them unless prescribed by a doctor.

However, many users exploit an easy loophole by buying the devices with nicotine online.

How does vaping work?

While vaping devices come in all sorts of shapes and sizes, all of them have the same few basic components: A battery, a coil, a wick and some e-liquid.

When an e-cigarette is turned on, the wick (made up of a heatable material) draws the e-liquid up onto the coil.

When the battery heats up, electricity moves through the coil, which heats the e-liquid until it vaporises. 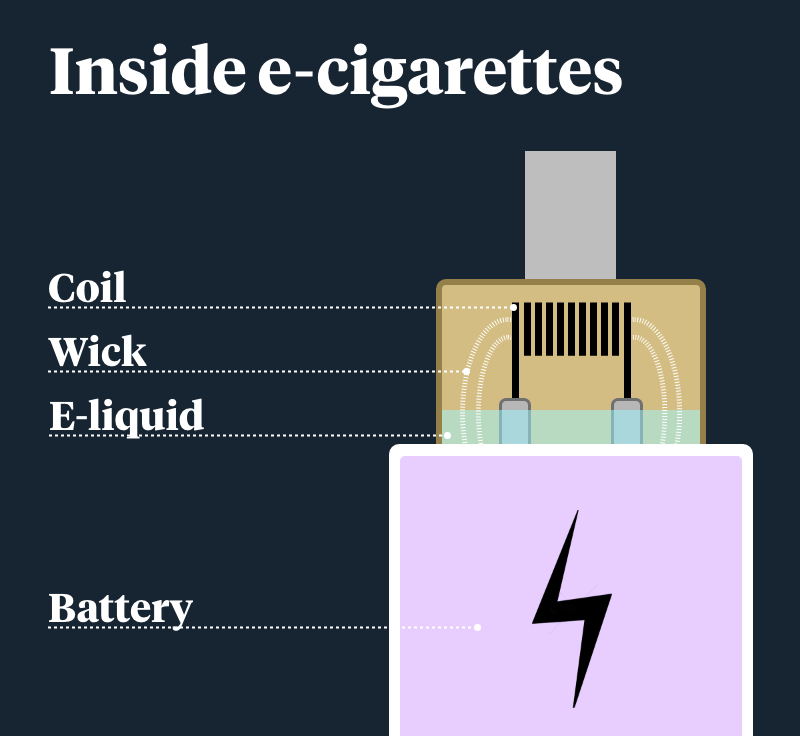 Why are people concerned about e-cigarettes?

The potential dangers of e-cigarettes have been making headlines in the US after a number of deaths caused by a mysterious lung illness possibly linked to vaping.

So far, more than 530 vapers have come down with similar symptoms to those who have died, including coughing, chest pain, shortness of breath, fatigue and vomiting.

On Thursday, health officials in Virginia and New Jersey each confirmed that another person had died from a vaping-related illness, bringing the toll to 16.

Many of the reports from patients involve serious, life-threatening symptoms in previously healthy people.

No single vaping device or ingredient has been identified as the culprit, but doctors suspect chemical exposure is a key factor.

It is also important to note that most patients admitted to vaping products containing THC – the high-producing ingredient in marijuana – instead of the usual nicotine.

In Australia, the Cancer Council found this year that 13 per cent of teens aged 12 to 17 had tried vaping and warned that figure was rising.

The argument for e-cigarettes

E-cigarette advocates argue that smoking e-cigarettes is less harmful than smoking traditional cigarettes because the smoker only inhales nicotine without all the dangerous, cancer-causing chemicals that come from tobacco.

A common claim is that e-cigarettes are “95 per cent less harmful than smoking”, which is based on a 2014 report chaired by Professor David Nutt.

However, it is not clear how the 12 individuals who wrote the report calculated that figure.

“People who vape won’t tell you it’s safe; only that it is less dangerous than smoking,” Dr Nespolon told The New Daily.

“We need to do a lot more research, but if it shows we can help the last 14 to 17 per cent of Australians who are still smoking use a product that is significantly less harmful than tobacco cigarettes then we should be looking at it as a way of getting smoking down to zero.”

He said the aim was to stop people from smoking altogether, and that more research needed to be conducted to see if vaping leads to more people picking up smoking tobacco cigarettes.

The argument against e-cigarettes

Organisations against vaping such as Cancer Council Australia say e-cigarettes can be a gateway to smoking tobacco cigarettes, and that vaping nicotine could actually make it harder to give up smoking rather than the other way around.

Australian researchers have also found substantial evidence that shows some chemicals in e-cigarette aerosols, such as formaldehyde and acrolein, can damage DNA and mutate cells.

Whether or not the levels of exposure to these chemicals are high enough to cause cancer remains unclear.

The vapour from e-cigarettes can also kill the type of cells that line the airways and disrupt the burying of dead cells by the immune system.

“We don’t have any quality control, no TGA approval and no safety testing, so it’s possible we could see contaminants in our products here in Australia, which is quite concerning,” Dr Ween told The New Daily.

“It’s really difficult to assess the health risks because the products are constantly changing and companies are releasing new versions every year.”

In the US, some researchers have found pesticides used to kill bugs inside some knock-off vape pens.

Some of them even contained myclobutanil, a fungicide that can transform into hydrogen cyanide – a potentially deadly chemical – when burned.

Sherbet flavour aside, inhaling something called unicorn puke might be as bad as it sounds.

As the US says the e-cigarette death toll is rising, we bust the vaping myths