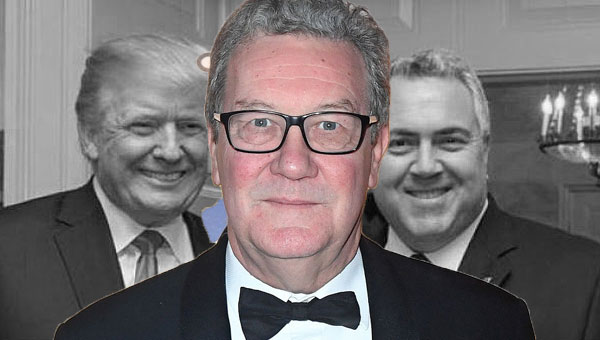 A US Senator and Trump ally said Mr Downer was directed to report on the Trump campaign. Photo: TND/Getty

Former foreign minister Alexander Downer is accused of making an unauthorised disclosure of his diplomatic cable detailing the Russian “dirt” on Hillary Clinton to the United States – the same material Scott Morrison now claims it would be “unusual” to handover.

Amid the first sign the Morrison government is pushing back against US claims of a conspiracy involving Australian diplomats, Australia’s ambassador to the US Joe Hockey released a strongly worded letter on Thursday night refuting claims that Mr Downer was “directed” to attend a meeting in 2016 with a Trump adviser, George Papadopoulos.

“In your letter you made mention of the role of an Australian diplomat. We reject your characterisation of his role,” Mr Hockey wrote to Republican Senator Lindsey Graham.

But in an account that is at odds with reports that Mr Downer simply followed protocol by reporting back to Australia via a diplomatic cable, US investigators are believed to be probing claims he also informed the Americans directly, by telling a US diplomat in London in July 2016.

While he did so in good faith to alert the Americans to possible Russian interference, senior government sources have claimed then-PM Malcolm Turnbull was not aware Mr Downer had decided to take this action.

It is not yet clear if Mr Downer sought approval from the Australian government before he spoke to the US embassy in London, or whether he spoke to foreign affairs minister Julie Bishop.

If true, the account suggests that rather than the FBI learning of his conversation in a London wine bar with a Trump adviser through official channels, Mr Downer informed the US directly in diplomat-to-diplomat talks.

Mr Downer has previously confirmed he told “the Americans” but did not explain the circumstances in detail.

Australian media reports have repeatedly suggested the US was informed via Australian intelligence agencies who were following protocol.

Claims of direct contact were first raised by The Wall Street Journal in 2018, which suggested the conduct “matters because it is not how things are normally done”.

“Mr Downer’s job was to report his meeting back to Canberra, and leave it to Australian intelligence,” the WSJ report said.

According to the book, The Apprentice: Trump, Russia and the Subversion of American Democracy, Mr Downer initially thought the disclosure of a Russian “dirt” file on Mrs Clinton was not a big deal and buried it in a three-page diplomatic cable that he sent to Australia within 48 hours of the meeting.

The memo was shared with Australia’s spy agency ASIO, but at the time it was not passed on to the US.

But two months later when WikiLeaks released hundreds of emails from Ms Clinton’s account, Mr Downer realised “with a shudder” that Mr Papadopoulos’s gossip may have greater significance.

“I think we better make sure the Americans are aware of this,” Mr Downer said, according to the book.

Mr Downer’s office then called the US embassy in London to arrange an urgent meeting to discuss the matter.

The book also claims that in that meeting with the US embassy, Mr Downer disclosed a line from his classified diplomatic cable to then-chargé d’affaires, Elizabeth Dibble, who previously served as a principal deputy assistant secretary in Mrs. Clinton’s State Department.

The account is fascinating because on Tuesday, Prime Minister Scott Morrison said it would be highly “unusual” for Australia to hand over the diplomatic cable in response to any request from the US.

The remarks strongly implied Australia would not hand over the cable.

However, The Apprentice: Trump, Russia and the Subversion of American Democracy, suggests Mr Downer may have already done so three years ago, sparking the FBI probe.

“Dibble was coming into the subject cold, and initially was under the impression that Russia had already passed the material to the Trump campaign. The entire conversation was over in 15 minutes,” the book says.

“Dibble thanked Downer and, within minutes of his departure, called the top FBI official at the embassy. The report was relayed through classified channels back to Washington, where it landed with a jolt on the seventh floor of FBI headquarters.”

Mr Downer was then interviewed by the FBI.

The book was written by Greg Miller, the Pulitzer Prize-winning national security reporter at The Washington Post who broke the story of Mr Turnbull’s explosive phone call with Mr Trump shortly after he was elected to discuss a refugee swap deal.

The New Daily has contacted Mr Downer for his response.