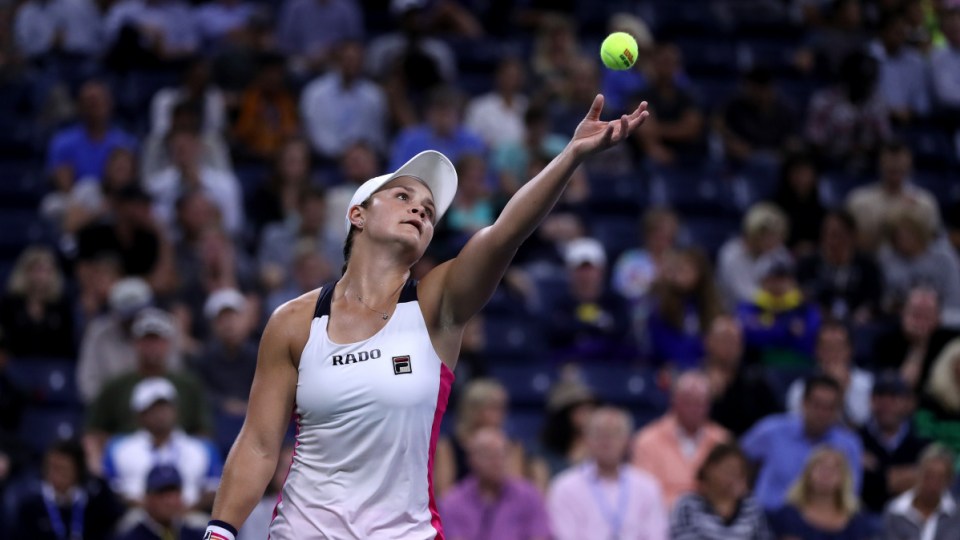 Ash Barty is hot favourite to end 2019 as the top-ranked player. Photo: Getty

Star tennis player Ashleigh Barty has been named the most culturally significant Australian in 2019.

In a list of the top 10 people who most defined our nation this year, the 23-year-old took out No.1, ahead of controversial rugby player Israel Folau and comedian Tom Gleeson.

Barty, a proud Ngaragu woman from southern New South Wales and north-eastern Victoria, became a household name in June when she earned the title of world No.1 after winning the French Open.

Her classy style of sportsmanship, laid-back attitude and graceful acceptance of victory and defeat were viewed by this year’s panellists as an embodiment of typical Australian qualities.

Sport was a central theme that shaped Australian culture this year, with nearly half the list by the Australian Financial Review dominated by athletes.

Published each year, the AFRs power lists are compiled by a panel of “insiders, experts and analysts”.

Brownlow medallist and former Australian of the Year Adam Goodes took out second place for reigniting a national conversation about Australian racism with two confronting documentaries.

The Final Quarter received a standing ovation when it premiered at this year’s Sydney Film Festival, and half a million people watched its commercial television premiere on Channel Ten.

Both documentaries exposed the unrelenting racism Goodes faced after pointing out a 13-year-old girl who had called him an ‘ape’ during a game in 2013.

His treatment by football fans and some sections of the Australian media ultimately drove him out of the game.

Comedian Tom Gleeson was No.3 on the list for pointing out the pretentiousness of the TV industry during his Gold Logie award acceptance speech.

Wine glass in hand, Gleeson said his victory was a win for “taking the p-ss” and told the audience to “lighten the f— up”.

“There has been a lot of concern that I’m turning this award into a joke,” he said.

“But what you are forgetting is I’m a comedian – I love jokes.”

Gleeson went a step further and told his industry: “When we see each other, we don’t say ‘I love your show’ any more, because we’re not watching broadcast TV, we’re watching Chernobyl.”

The devout Christian raised more than $700,000 on GoFundMe to lodge an appeal before the page was shutdown, after which the Australian Christian Lobby raised $2 million on his behalf.

Folau’s legal fight sparked a national debate about freedom of speech and he emerged as a hero among those who resented the gay marriage victory.

National Gallery of Victoria director Tony Ellwood was in fifth place for doubling NGV attendance from 1.57 million to more than 3.2 million with Melbourne Design Week and the record-breaking NGV Triennial.

Sixth place was taken by Ellyse Perry, who has been hailed as Australia’s greatest female cricketer of all time.

She also represented the national football team, the Matildas, before opting for cricket.

Panellist and PwC partner Russel Howcroft said: “Ellyse Perry and her teammates are teaching the male side the appropriate way to play cricket because the men have already shown what’s inappropriate.”

Philanthropist Judith Neilson took out seventh place for her making a $100 million donation to found an institute of journalism.

Recipients of the first round of funding include the ABC for a project on media literacy, The Australian for a new series of reports on China, The Sydney Morning Herald and The Age for employing Indigenous journalists and a trainee photographer, and the Financial Review to reopen its Jakarta bureau.

In eighth was Nicole Kidman for telling Australian stories beyond sport and for affirming her status as one of our most talented actors in US television series Big Little Lies.

The popular show, in which Kidman starred and executive-produced, put her on the cover of Vanity Fair.

Artist Ben Quilty took out ninth place for his Torana and budgie paintings, his official war artist posting in Afghanistan for his trustee role at the Art Gallery of NSW.

He has spoken out about a number of issues in sport, including race, gender, toxic masculinity and mental health issues.

In 10th place was Kate Mulvany for starring in Every Brilliant Thing at the Belvoir St theatre, Foxtel/Lingo Pictures’ Lambs of God and the upcoming US Amazon series The Hunt.