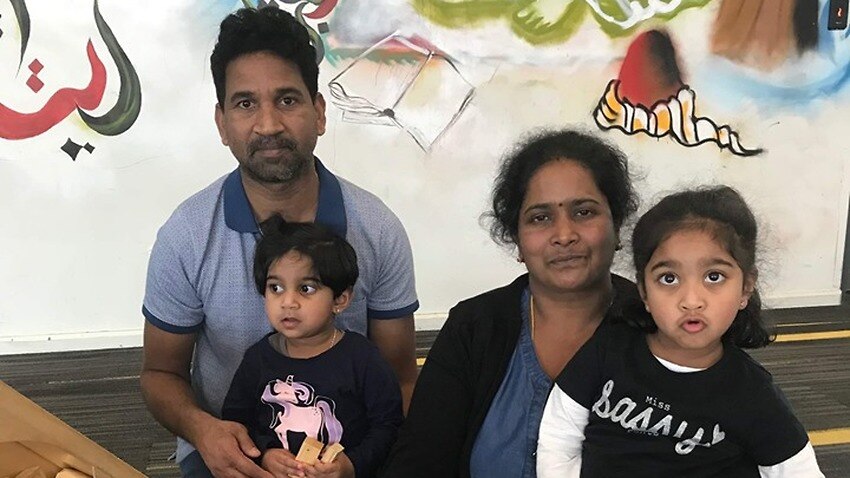 There are fears Priya and Kopika could be split from Nades and Tharunicaa. Photo: Facebook

The United Nations Human Rights Committee has asked the Australian government to release a Tamil family fighting deportation from detention.

Lawyers for the Sri Lankan parents Priya and Nadesalingam and their Australian-born daughters Kopika, four, and Tharunicaa, two, were on Wednesday advised the UN had granted interim measures.

The UN has requested that the Australian government’s Department of Immigration release the family into community detention or find another way to end their existing detention within 30 days.

In a letter seen by the ABC, two UN Human Rights Committee special rapporteurs told the family’s lawyer they had requested Australia transfer the family “into a community setting arrangement, to find another way to end their existing situation of detention”.

An application was made to the Human Rights Committee on September 27 under the Optional Protocol to the International Covenant on Civil and Political Rights, on behalf of Tharunicaa.

The UN letter, dated October 1, said it had made the request to the government at the request of the family’s lawyer.

The family is being held on Christmas Island while their case is heard in the Federal Court.

“I welcome the UN’s assessment that detention is no place for children. And I would hope that the Australian government would honour their international human rights obligations,” family friend Angela Fredericks said in a statement.

“They are watched constantly by guards. Their every interaction is filmed. They do not have freedom of movement. In detention, this family merely survives. In Biloela, back in their home, they could thrive.”

The Australian government has previously said the family won’t be returning to mainland Australia while their case is being determined.