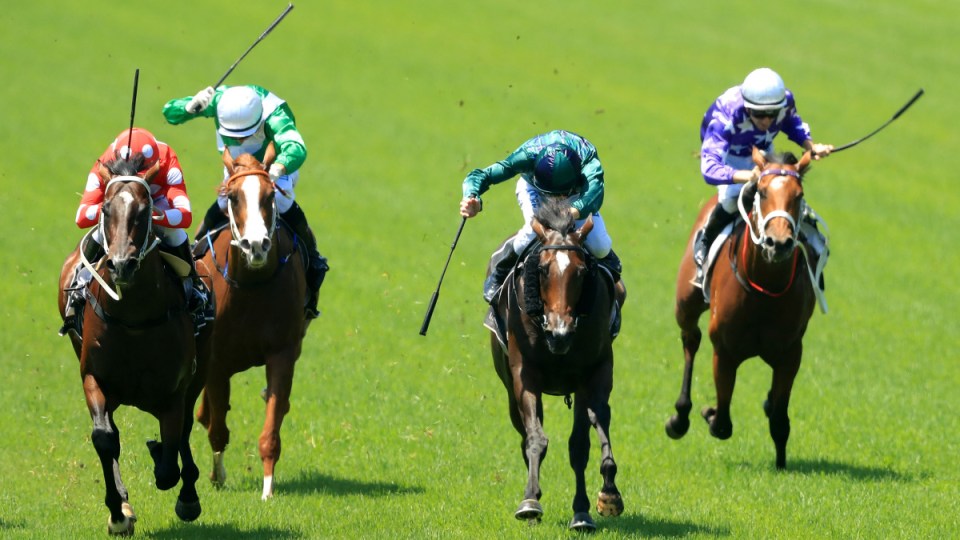 They told me love was in the air. But when it came to watching horses having sex, all I could smell was fear and antiseptic.

And money, of course. Loads of it.

Three men wearing sterile gloves guided a snorting black stallion into the ring. It was early morning and with every few steps the massive horse would rear on its hind legs and bellow, driven by lust and testosterone.

A few metres away stood the target of its next coupling; a small, frightened mare, whinnying and stomping its feet, its eyes wide and darting in every direction, its rear end swabbed with disinfectant.

I’d been sent by a magazine to a private stud in the lush Hunter Valley in New South Wales to take a first-hand look at the lucrative breeding business that underpins thoroughbred horse racing.

No artificial insemination for this industry. Its supporters say it’s all about ensuring purity and authenticity.

But they would say that.

Here’s what they won’t say: A syringe filled with high-quality horse semen available across the globe to anyone with a dream of competing with the big boys of racing would send the lucrative value of most prized breeding stock plummeting.

So it’s done the natural way, if you can define natural as two men holding down the mare with ropes, another pulling aside its well-manicured tail, while two others push the stallion into position to ensure this brutally efficient docking manoeuvre goes off without a hitch.

It’s been called the fastest 30 seconds in sport, a quick but not so delicate act that, with each union, can earn more than $250,000 for the owners of a stallion with a record of siring fast horses.

It also tells you everything you need to know about the so-called sport of horse racing and all its self-righteous, cashed-up vested interests.

So with another spring racing season upon us, let us prepare for the usual round of industry claptrap and mythmaking.

Stand by for the ritualised reporting that breathlessly details the various half-drunk A-Listers tottering through marquees in their sponsored outfits.

Prepare your eyes and ears for the never-ending assault from all those try-hard television commercials from betting agencies.

But most of all, see if you can swallow the greatest myth about racing – that the industry at its heart is simply allowing beautiful thoroughbreds, born with an innate competitive desire to race, to do what nature intended.

…and nothing on their backs except small, near-anorexic men holding whips.

We all deplore dogfighting, despite rumours it continues being staged in suburbs around the country.

We long ago outlawed cockfighting, too, with its array of nastily sharpened barbs and metal spurs.

The greyhound industry narrowly survived a near-death experience a few years ago and barely clings to relevance these days.

But horse racing, regularly mired in drug and race-fixing allegations, bereft of any social purpose apart from the accumulation of money, remains immune to scandal.

Protected by many of our community’s rich and powerful, the industry keeps reminding us about the jobs it creates, the money it pours into the economy, its rich history going back thousands of years and the pure entertainment it provides.

Oh, and have they told you about how horses love nothing more than racing against one another with little men on top of them wielding whips?

Please. There is no scientific evidence that shows whipping a horse makes it run faster.

Most whips – padded these days but which still leave an imprint on the horse’s flank – are employed in the final stages of a race when the animals are fatigued and have no energy left in reserve.

The fact that whipping is still allowed – even though it would be an offence under animal cruelty legislation if perpetrated on a horse outside a racetrack – underpins just how immune racing continues to be when it comes to the changing values of the rest of society.

It remains an illogical and antiquated act – a jockey allowed to whip a horse a few times before the final 100 metres of a race and then, in the fury of that final surge to the post, a free pass to strike it as often as deemed necessary.

Not long ago an independent study found that 75 per cent of racegoers and enthusiasts were against whips being used in racing – and the majority of those said they would continue to support the industry if whipping was banned.

The reason why whipping continues can only be for the same reason that small mares are held down by ropes and serviced by stallions flown in on internationally chartered jets.

Powerful, vested interests, getting their way once again, and reluctant to change the status quo.

Sadly, it hasn’t yet dawned on them that by banning the whip – or what they lovingly refer to as “the persuader” – the racing industry might suddenly find itself attractive to a large and newly appreciative audience.

What a marketing triumph that would prove to be.

You might even smell some genuine love in the air.

Garry Linnell: This racing season, the whip must be given the flick