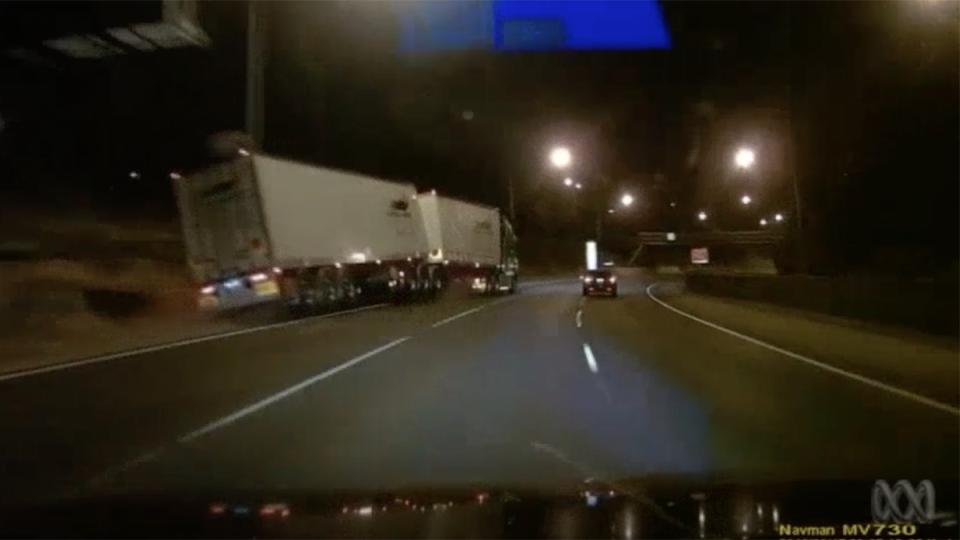 A trcuk driver has made a "brilliant" recovery after his trailers began swaying madly on a South Australian freeway. Photo: ABC News

A dashcam recording has captured a B-double driver making a heart-stopping recovery on the down track of Adelaide’s South Eastern Freeway.

The incident happened near Crafers about a week ago and was posted by Dash Cam Owners Australia last night.

The action of the driver and the high tech of the truck are what’s enabled that brilliant recovery and I think it actually should give the public confidence,” he said.

On September 11, another driver crashed his truck into six cars at the base of the freeway when his primary brakes failed.

SA Police said the Queensland driver would be summonsed for failing to use a low gear and for dangerous driving.

In 2010, 42-year-old John Posnakidis was waiting at a bus stop on the South Eastern Freeway when he was killed by an out-of-control semitrailer that ploughed into him.

In 2014, 41-year-old truck driver James Venning died when he slammed into a wall at the intersection of Cross Road and Glen Osmond Road at the beginning of the freeway.

Driver not likely to be fined

Mr Shearer believed the driver in the latest incident would not be fined for using his primary brakes as he was in a low gear with his engine brake engaged.

He said there was a “myth out there” — mostly with interstate drivers — that primary brakes were not be used on the South Eastern Freeway.

“Drivers are allowed to use their footbrake or their primary brake so long as they’re not relying on it as the sole means of slowing the truck,” Mr Shearer said.

Mr Shearer said that was recently made clear by the State Government, and his association “fully accepted” those rules and any penalty for breaking them.

He said the truck company involved was “highly credible” and trained drivers on safely negotiating the South Eastern Freeway down track.

In a statement, SA Police said it would make enquiries with the transport company to determine the cause of the incident.