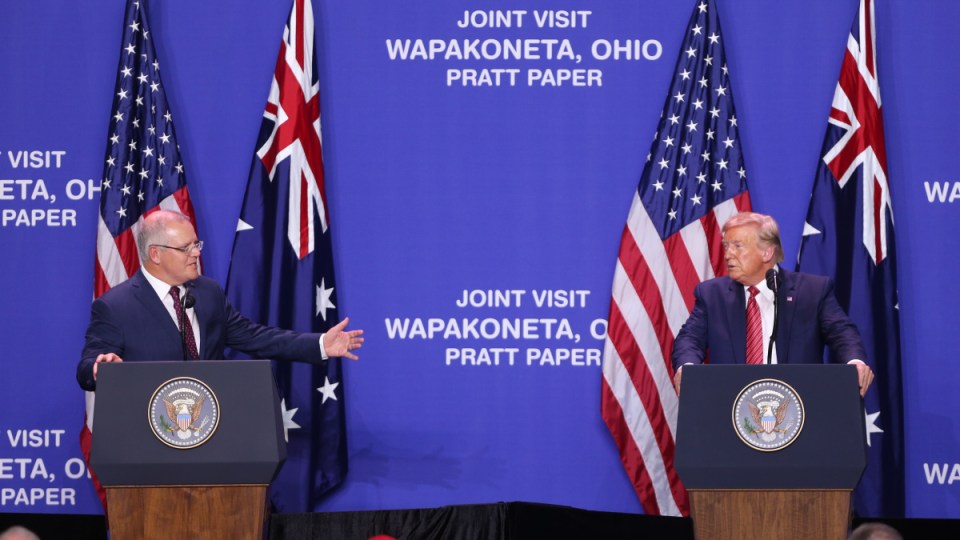 In the heartland of America, they turned out in droves for Donald Trump.

The US President was greeted in Wapakoneta, Ohio, with the town’s small population turned out to wave flags and Trump 2020 banners and to cram into the brand new paper recycling factory that has brought jobs to the area.

Macho Man played over the speakers as the President and Prime Minister Scott Morrison toured the paper mill’s facilities: “I wanna be a macho man.”

But it was an Australian man who had brought the greatest show in America to town.

Mr Trump labelled billionaire boxmaker Anthony Pratt “one of the most successful men in the world” – and everyone knows how much he loves a winner.

Mr Pratt pledged ahead of the 2012 election that if Mr Trump won, he would invest $5 billion in the US, and he’s making good on that.

The 90,000-square-metre paper and recycling plant is the result of a $500 million investment by Mr Pratt.

Ultimately, he plans to invest $2 billion in his American operations, following what he calls a “hub and spoke” model of building paper and card recycling mills and then surrounding them with box plants.

Australian Prime Minister Scott Morrison: "Unemployment in the United States has not been as low as it is since Neil Armstrong walked on the moon. That is an amazing achievement, Mr. President." pic.twitter.com/6YXpNXGHyr

Ohio is Trump heartland and it’s no accident Mr Pratt chose it to build his biggest paper mill yet.

The billionaire businessman has cultivated a close relationship with the President.

“Mr President, if it weren’t for your presidency this mill would not be here today,” he said.

He explained to Mr Trump as they looked at photos of cardboard recycling – nearly unheard of in the US – that his rollout of plants across the country would create 9000 American manufacturing jobs.

And Mr Pratt shared the love, telling him Mr Morrison had generated 29,000 jobs a month since he was treasurer.

“The Prime Minister is the Don Bradman of Australian job creation – Don Bradman was our Babe Ruth,” he said, explaining the cricket reference to a confused Mr Trump.

The nearly 2000 people waiting to see the President speak were muted in their roars for the unknown Mr Morrison, but warmed up to him after Mr Trump touted the Coalition’s election victory – which he put down to the PM believing many of the same things as him.

Mr Morrison further endeared himself by attempting an American-accented pronunciation of Wapakoneta.

“They tell me this is called Wapak – is that right?” he said, stumbling over the town’s nickname.

“You think I would get it better. We’ve got Wagga Wagga, Wollongong, Wallerawang, Wangaratta, Warnambool, Woolloomooloo.

“So Wapak, that fits right in, a little bit of Australia right here in Ohio.”