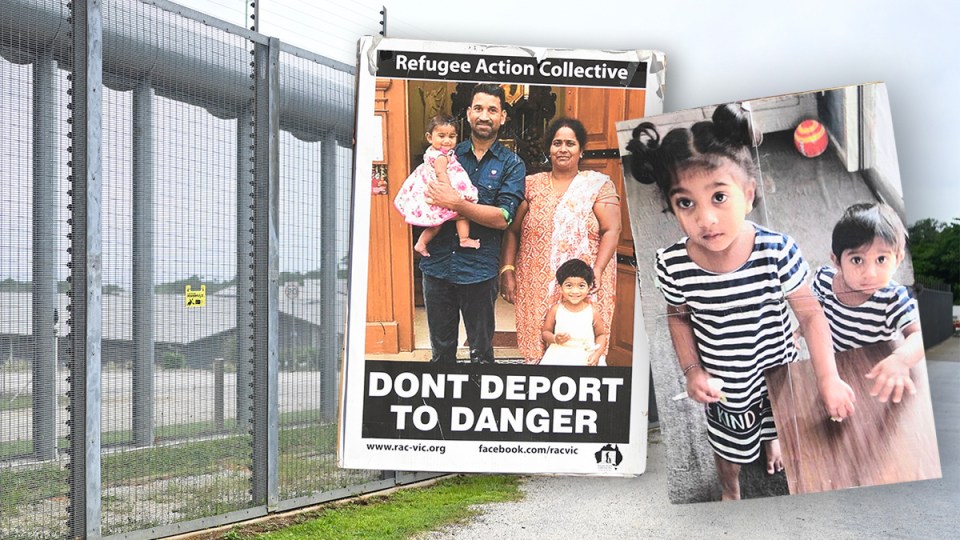 The family fear persecution if they return to Sri Lanka, where Tamils are an ethnic minority. Photo: The New Daily

A Tamil family detained on Christmas Island will need therapy to recover from the compounding layers of trauma they’ve experienced while fighting deportation to Sri Lanka.

That’s according to mental health social worker Angela Fredericks, who has spoken with Priya and Nades Murugappan daily since their arrival at the Christmas Island detention centre on August 30.

The family’s deportation case now hinges on an upcoming court battle, meaning it may be months before the couple and daughters Kopika, 4, and Tharunicaa, 2, can get the help they need.

While the family were “incredibly relieved” to have been granted another reprieve on Thursday, Ms Fredericks said there are serious concerns around the impact of loneliness and social isolation on their mental health.

She said between six and eight security guards – fitted with body cameras – are watching their every move.

Priya told Ms Fredericks that she gets followed whenever she goes to the toilet.

“The kids get videoed which really upsets her … Even during the night, every couple of hours, their door gets opened, they get looked at and then they (security guards) leave,” Ms Fredericks said.

When Ms Fredericks was on Christmas Island with the family, she noticed Tharunicaa became very distressed whenever Nades left her sight.

“The detention centre backs on to a [recreation] centre so she (Tharunicaa) can hear kids and she can hear their voices but she can’t actually go to them.”

At one point, Priya was physically injured inside the room they were staying at, Ms Fredericks said.

“The Sunday after I left, the floorboard in the room they were in actually gave way so Priya fell up to her knee. She ended up with soft tissue damage to her leg,” she said.

She is concerned over their ability to access fresh fruit and vegetables after Kopika and Tharunicaa developed a vitamin deficiency during their stay at a Melbourne detention centre, Ms Fredericks said.

“On top of all of that, Priya ended up with bladder issues after her second delivery which was never repaired,” she said.

She said there was no toilet in their room, forcing Priya to go elsewhere.

“With a bladder problem, it’s just so demeaning and there’s just no dignity there,” Ms Fredericks said.

While this horror ordeal will stay in the minds of this family for the rest of their lives, the psychological impact is “definitely something we can repair through real detailed therapy”.

Ms Fredericks said the children’s trust and feeling of safety has been “absolutely shattered”.

“As children we all form an attachment with our parents,” she said.

“Through multiple times where they’ve been separated from their parents and witnessed their parents in distress, just that whole fight or flight environment does rupture that attachment. That then causes its own host of problems with anxiety and trust issues.”

The upcoming legal trial will focus on Tharunicaa and her right to apply for a protection visa.

Her parents and sibling have already been refused refugee status, but the family is being kept together while the matter is finalised.

A date has not yet been set for their case to be heard but the process could take months, according to the family’s lawyer Carina Ford.

Despite being born in Australia, Tharunicaa would normally also be refused Australia’s protection as she is legally considered an “unauthorised maritime arrival” because her parents came by boat.

But in a new argument aired in the Federal Court this week by her legal team, Tharunicaa should still be entitled to apply for a protection visa following a period in 2017 when Home Affairs Minister Peter Dutton “lifted the bar” for boat arrivals.

Justice Bromberg said the family had a prima facie case that Tharunicaa’s visa application was valid, and until that application was finally determined, the federal government had no power to deport her.

Mr Dutton insists they are living in a house, close to facilities including a school and swimming pool.

“That is a complete lie … we are kept inside this detention centre … we have no access to go outside this compound,” Priya told Sky News through an interpreter following the court decision.