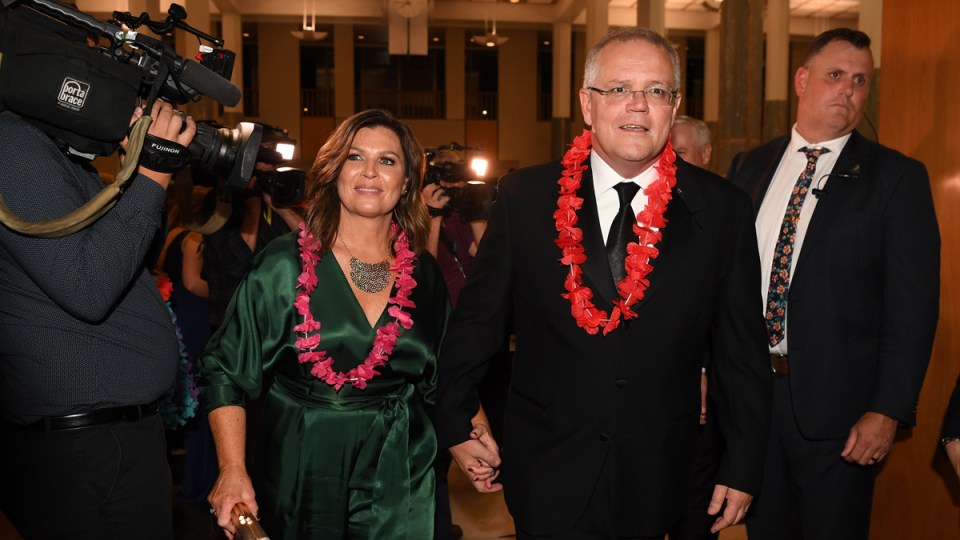 It is the political affair that would make headlines every year — if it wasn’t kept off the record.

The Canberra Press Gallery Midwinter Ball is one of the most exclusive and anticipated dates on the calendars of pollies and journalists alike.

The 20-year tradition brings media and politicians together, with healthy servings of food and alcohol, to poke fun at themselves and each other — with the cameras off.

But Parliament is also a leaky place — especially when the speeches are good.

Former prime minister Malcolm Turnbull discovered that in 2017 when a video of his speech, where he impersonated US President Donald Trump, made it far beyond the walls of capital hill to the airwaves and the office of the President himself.

Fearful of once again getting scooped, the press gallery determined this year the speeches would be out in the open for all of Australia to see and hear.

And so with the cameras switched on, so too were Prime Minister Scott Morrison and Opposition Leader Anthony Albanese, as they searched for jokes that would keep the audience onside and themselves off the front page.

Mr Morrison did tiptoe near some of the Coalition’s recent controversies, noting that with the Pacific Islands Forum theme for the evening, Deputy Prime Minister Michael McCormack would be enjoying a fruit platter.

He also acknowledged his intervention to remove gender-inclusive toilet signs at a government department.

For those who need restrooms tonight, figure it out yourselves, I removed all the restroom signs,” he said.

Neither did the Prime Minister shy away from some other toilet humour, referencing a rumoured incident at the Engadine McDonalds bathroom in 1997 after his favourite rugby league team, the Cronulla Sharks, lost the grand final.

“I note the great collective that runs the gallery has in its infinite wisdom decided to put tonight’s speech officially on the record,” he said.

Sure, your call. But now you won’t get to hear … what really happened at the Engadine McDonalds in 1997. It will remain the mystery of the ages.”

Mr Albanese was more measured in his speech, which he said he had been waiting some time to deliver.

“I knew if I just hung around for long enough — this is my 20th Midwinter Ball — the caucus would go, ‘Oh for God’s sake, let him give the speech,” he said.

And both, perhaps knowing the cameras were on, or perhaps in the spirit of the evening, paid tribute to the people who work in Parliament House.

“We might not agree on how, but I think we all agree on why we’re here: it’s about the Australian people,” Mr Morrison said.

Mr Albanese agreed, saying the ball “does do some serious heavy lifting in the charity stakes, so congratulations to all involved”.

He parted with advice that he said, on the record or not, should be the spirit of the ball:

The event has raised more than $4 million for charity in the two decades it has run.