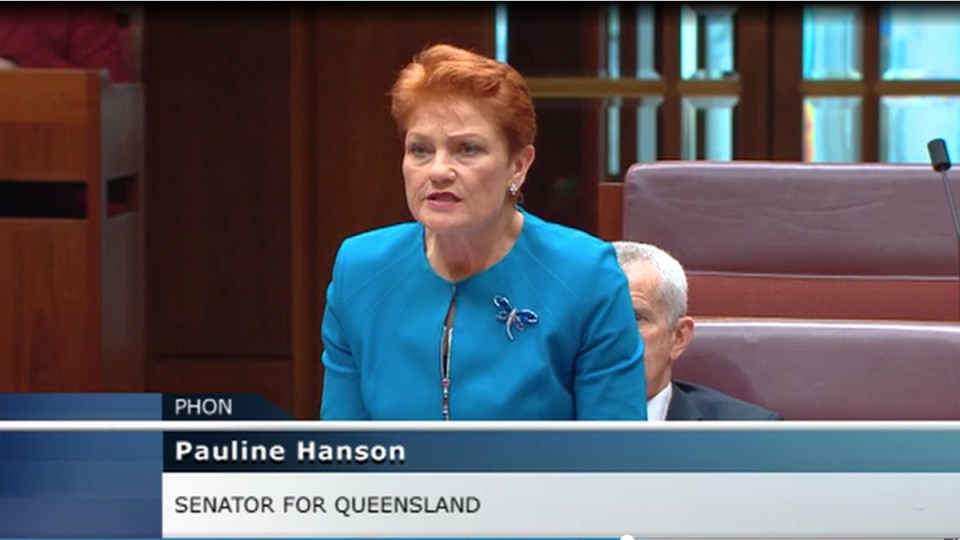 Pauline Hanson has used parliamentary privilege to publicly accuse the ex-wife of her son of making false claims that he sexually abused his own child.

The One Nation leader’s extraordinary claims over an ugly family court matter emerged after Prime Minister Scott Morrison appointed her as deputy chair of national inquiry into the family law system.

Earlier on Wednesday, Senator Hanson said the experience of her sons in the system had inspired her to call for a royal commission into the matter.

She expanded on those claims in extraordinary detail in July in the Senate, where she is protected by parliamentary privilege and cannot be sued for defamation.

“I know this feeling because, for years, my own son faced these destructive allegations in an attempt to stop him having access to his young son,” she told Parliament in July.

“My ex-daughter-in-law claimed to police that my son was outside her home in Townsville, which led to a DVO [domestic violence order] being taken out against him.

“That was despite him being sick and on the Gold Coast, some 1000 kilometres away. He was forced to defend himself, at enormous expense, and was dragged through the courts.

“She also falsely alleged – a soul-crushing claim – that my son had sexually abused his boy. Again, the false claim was designed to stop him having any connection with his son. No charges were brought against my son.”

By making the allegations under parliamentary privilege, Senator Hanson is also immune from laws that might otherwise make it an offence to publish details of family law matters.

Senator Hanson also told Parliament that while one woman was dying a week at the hands of her partner, 21 men are committing suicide.

“These are just a few small examples of the efforts some spiteful, inconsiderate parents will go to in order to prevent the non-custodial parent seeing their kids,” Senator Hanson said.

“It shows you how lies and perjury are leading to the failure of Australia’s family law system and contributing to the death of 21 men by suicide and the murder of one woman each week.

“When the tables were turned in my own son’s family law case, and the court revealed the perjury by my ex-daughter-in-law, there was no punishment.

“Here was this spiteful partner who thought she could prevent the father from having anything to do with their child until he was a teenager – a child who is now five years old – and she has been stopping him from seeing his son since the child was 15 months old.

“Isn’t it exceptional that, when the mother faced the same outcome she wanted to inflict on my son, she couldn’t handle the thought?”

Senator Hanson said the family law system was a place we have created that is “killing dads, leading to the murder of women and hurting millions of kids in the process”.

“Family law deaths are not acceptable and have reached epidemic proportions. Family law is slowly killing good people, and I for one will move heaven and hell to get through to the lazy minds and do-nothing attitudes of many of you in this Parliament when it comes to family law matters,” she said.

Senator Hanson also said men being forced to pay too much child support was a factor in suicides.

“Child support is part of the problem in the suicides of 21 men a week and the murder of one woman a week. We’re seeing men unable to afford a fresh start in this out-of-touch child support regime.

“One immediate change we should be implementing is a quarantine on overtime earnings and of secondary wages over 38 hours already worked. If a parent chooses to put in the hard yards to better themselves or start a new family, what right does an ex-partner have to their money?”

On Thursday, Labor leader Anthony Albanese said he could not support the family law inquiry if Senator Hanson remained involved.

“The fact is, that these issues should be dealt with on a bipartisan basis. I don’t want this to be a political football,” he said.

“But I say to the Prime Minister: we can’t support an inquiry in which he has unilaterally, along with Pauline Hanson, done a deal.”

Speaking outside of Parliament, Senator Hanson also accused some people of “making up” allegations about domestic violence, and slammed them as “nothing but liars”, just hours after being appointed to a review of the family law system by Prime Minister Scott Morrison.

To everyone who's followed my journey and attempts to receive the support of the Government to hold a Family Law Inquiry – I'm pleased to announce it is finally happening.

This announcement is a win for every Australian and I thank everyone for their support. -PH pic.twitter.com/HT2DsZKj8l

Senator Hanson’s accusation that women are lying about domestic violence sent the ABC switchboard into meltdown on Wednesday, with the national broadcaster receiving more than 200 texts in response to the interview.

The Prime Minister said the proposed inquiry was not about suggesting either men or women were getting a dud deal.

“This isn’t about picking sides. I mean, you literally do need the wisdom of Solomon in dealing with these issues,” Mr Morrison told Nine.

“One area that we’re specifically looking at, which hasn’t really been done before, has been looking at the role of grandparents in all of this because they get involved in custody issues. As these issues get more complex, it’s always timely to look at this.”

During the interview, the PM confirmed he will appoint Senator Hanson as co-chair of the committee, before later clarifying she will be deputy.

“We will be supporting that. She has been an advocate on this,” Mr Morrison said.