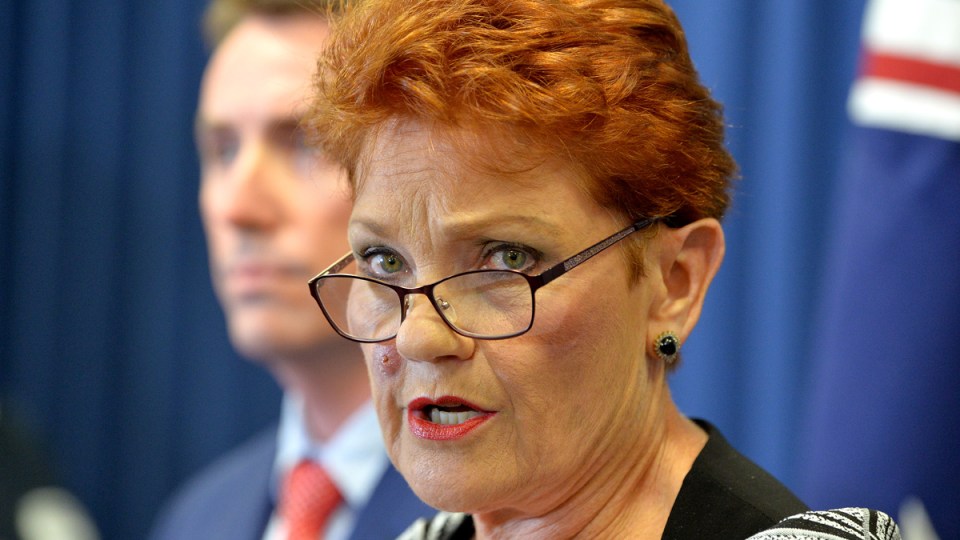 Pauline Hanson has accused some people of “making up” allegations about domestic violence, and slammed them as “nothing but liars”, just hours after being appointed to a review of the family law system by Prime Minister Scott Morrison.

Senator Hanson has previously stated that more men die from suicide after family breakdown than the number of women murdered by ex-husbands.

She will now have a starring role in the inquiry announced by the Morrison government into the family law system.

The One Nation leader has revealed her personal experience of her two sons battling ex-spouses in the Family Court has inspired her to call for a major review of the system.

“Yet he had to go through the procedure of other courts. I’m seeing too many cases where parents are using domestic violence to stop the other parent from seeing their children.

“If people make false allegations, you’re going to be held accountable for it.

“You’re not going to take your lies into the courtroom, so you game the system of possibly [securing] more time with your children.”

Hanson says mothers make up allegations of domestic violence and she has evidence but she’s not going to discuss it on air. “It comes across our desk on a weekly basis”.

Senator Hanson’s accusation that women are lying about domestic violence sent the ABC switchboard into meltdown on Wednesday, with the national broadcaster receiving more than 200 texts in response to the interview.

“There are people out there who are nothing but liars, and who will use that in the court system,” she said.

“Domestic violence orders can be as little as sending text messages saying you want to actually see your child, how is the child?”

Earlier, in an interview conducted before Senator Hanson’s controversial remarks, Mr Morrison said the proposed inquiry was not about suggesting either men or women were getting a dud deal.

“This isn’t about picking sides. I mean, you literally do need the wisdom of Solomon in dealing with these issues,” he told Nine.

“One area that we’re specifically looking at, which hasn’t really been done before, has been looking at the role of grandparents in all of this because they get involved in custody issues. As these issues get more complex, it’s always timely to look at this.”

During the interview, the Prime Minister confirmed he will appoint Senator Hanson as co-chair of the committee.

“We will be supporting that; she has been an advocate on this,” he said.

But anti-violence campaigner Rosie Batty, whose son was murdered by her ex-husband, said she was disgusted by the inquiry.

“It is completely unacceptable for us to have another inquiry. We have had multiple inquiries about the failings of the family law court system. I have campaigned also for changes,” Ms Batty told ABC radio.

“There has been a Law Reform Commission inquiry with 60 recommendations presented to the government earlier this year – not one recommendation has been acknowledged or enforced.”

Last year, Senator Hanson said the experience of her two sons had had a big impact.

“I didn’t have that much of a problem with it myself personally, but I’ve been through it with two of my sons. And I’m going through it with one of my sons now at the moment, for the past three years,” she said.

“I’ve been very concerned about my son’s wellbeing and trying to deal with it through the court system, representing himself.

“So it’s been extremely difficult for him. I’ve given him the assistance, support, and financial assistance through the trial. It’s extremely hard.

“I’ve got people pulling me up when I’m doing my shopping. I’m talking to men who are actually at the end of their tether. I’m very concerned about them.

“It’s absolutely disgusting. Not only that, it’s the children that are lied to by the parents. They’re denied the right to see their parents; either one, the father or the mother.

“Of course, the courts have to protect the women. And I understand that, because of the 72 women who have been murdered in this last year. But there’s also a lot more male suicides because of it,” she said.

‘Nothing but liars’: Fury as Pauline Hanson points finger over domestic violence allegations