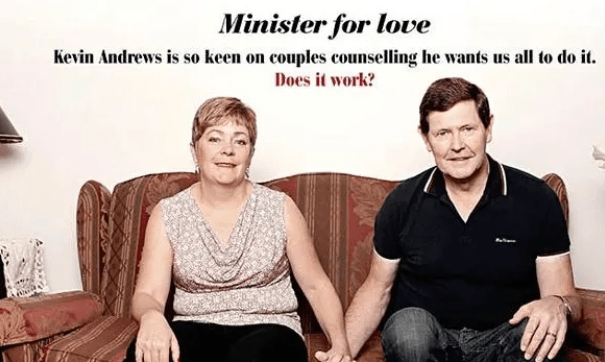 Kevin and Margaret Andrews as they appeared in The Australian. Photo: The Weekend Australian

The Liberal MP once dubbed the minister for love, who believes de facto couples are more “unstable”, has been hand-picked by Scott Morrison to run a new inquiry into the nation’s family law court system.

The Prime Minister announced the inquiry on Tuesday, telling MPs that former Liberal frontbencher Kevin Andrews, 63, will run the hearings.

A social conservative, Mr Andrews has enjoyed a 40-year marriage to wife Margaret, and often preached the benefits of regular marriage counselling.

But it’s his views on de facto relationships and divorce that may raise eyebrows among voters, with Mr Morrison’s hand-picked committee chairman once warning that such relationships are more “unstable” than marriages.

“I am not worried about people entering into de facto relationships. People can enter whatever relationships they want to. My only concern is that if we’ve got to pick up the pieces at the end, the states has got to support people,” he said in 2014.

“The data shows there is a higher incidence of de facto relationships breaking up.”

Mr Andrews suggested it was too easy for men to “drift” into a de facto relationship without making a commitment.

“What a lot of people do is drift into a relationship. They get together. They like each other. They move in together. And then they try and drift along without making a decision. One might think, ‘this is a pathway to getting married’. The other might think, ‘I am happy where things are’,” he said.

But he insisted he had never said de facto relationships cannot result in long-term, loving partnerships.

“The people who suffer the most out of relationships breaking up are kids.”

Mr Andrews is also the author of a book, Maybe ‘I Do’ — Modern Marriage and the Pursuit of Happiness, a 480-page tome on the joys of marriage.

In the book, he argues the greatest threat facing Western civilisation is not terrorism or climate change but the divorce rate.

The number of de facto relationships has increased by nearly a third in the past two decades. There are now estimated to be about a million de facto couples in Australia.

“I have an affectionate relationship with my cycling mates, we go cycling on the weekend, but that’s not marriage,” he said.

Mr Andrews was originally dubbed the minister for love over his enthusiasm for taxpayer-funded $200 counselling vouchers. The $20 million pilot program aimed to allow 100,000 couples to get help.

But he proved less conservative than he might appear, backing taxpayer-funded sex lessons for married couples to teach “intimacy” as common sense.