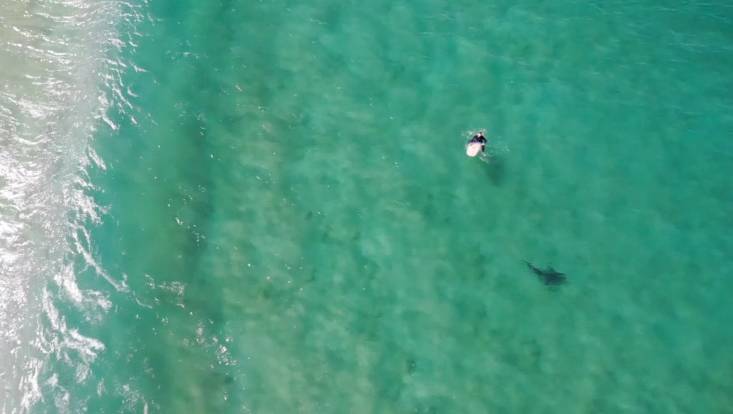 The drone helped warn the surfer as the shark neared. Photo: Twitter/Christopher Joye

A drone owner has captured a large shark stalking an oblivious surfer off a New South Wales beach.

Drone enthusiast Christopher Joye watched through his screen as the large shark started to tail the unsuspecting surfer at Werri Beach, near Gerringong, which sits 129 kilometres south of Sydney.

Mr Joye, a journalist with The Australian Financial Review, was filming the water using a Mavic Enterprise 2, a specialised drone, which has a built-in speaker system that enables him to tell people in the water if he spots a shark.

“At Werri Beach today this large shark was approaching a surfer, and I used my drone’s speaker system to warn him,” he tweeted.

“Watch him look up at the drone, then bolt, with the sudden splashing warding off the approaching shark.”

It comes as data from a Surf Life Saving New South Wales drone trial has revealed earlier this year that January is the most significant month for shark activity.

The trial showed that the NSW north coast was the nation’s hotspot, with Evans Heads having 58 sightings out of the 370 spotted over the past summer.

Byron Bay, Ballina and Pambula, the latter on the far south coast, all had a high number of sightings.

“If lifeguards spot what they believe to be a shark then they try and identify it as a threatening species – so anything over two metres and a bull shark or a tiger shark or a white pointer,” he said.

“If it’s within 200 metres of swimmers then they sound the alarm on the drone itself, and this alerts people who might be in the vicinity to get out of the way.”