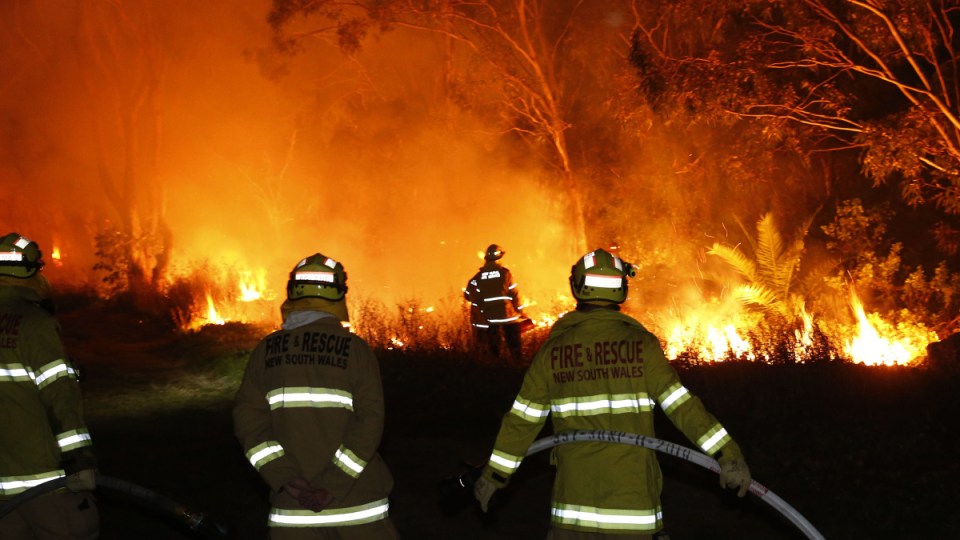 Queensland’s bushfire and cyclone seasons could collide later this year as the state cops a battering from climate change, the state’s Emergency Services Minister has warned.

Fearing a difficult end to 2019 – and with firefighters working around the clock to contain more than 55 bushfires burning across southern Queensland ahead of predicted worsening weather – Craig Crawford has appointed a taskforce to ensure volunteers called on in times of disasters can cope.

Queensland Fire and Emergency Services workers were acutely aware of the dangers climate change was throwing at them, he said.

“My people are very much on the side of the converted,” he told ABC radio on Friday amid the worst start on record to Queensland’s fire season.

“They know what they are seeing is a heightened fire danger but at the same time we’re expecting probably a heightened cyclone season as well so we’re getting it from both ends.

“But there are a lot of people in this state and in this country that don’t even believe climate change exists.”

Mr Crawford fears what might happen if the bushfire season continues in the way it began, and worries about fatigue setting in among volunteers and their employers, who release them during emergencies.

“Are we going to be able to sustain those numbers? What happens if we have a fire season like we had for the last week for the next three to four months?

“How do we manage that? How do we keep their employers happy, their families happy, and still be able to tap into them?”

Mr Crawford has appointed a QFES team to look at how Queensland can best manage volunteer fatigue and other risks, including limited interstate help once fire seasons kick in in other states and territories.

Hundreds of firefighters have travelled to Queensland in the past 10 days to deal with the state’s ongoing bushfire emergency.

The danger is not over yet. Dozens of fires are still burning and a wind change expected on Friday might spark flare-ups.

Across the border in northern NSW, aerial water-bombers were on standby on Friday as 13 fires remained uncontained out of 40 still continuing to threaten homes and rural properties.

Warm and dry conditions with a southerly wind change increasing fire dangers today (https://t.co/xFp3yooLl3). It won't be as windy as last weekend, but there will probably be some smoke through #SEQld today. See @QldFES for #fire info and @qldhealthnews for health info. pic.twitter.com/4Qj0oN4aC4

Police Commissioner Katarina Carroll said conditions next week shouldn’t match those of the past seven days, when dozens of properties were destroyed or damaged in the south and south-east.

But she also said some fires will continue to burn for the foreseeable future.

“We will not put some of these fires out unless we get a lot of rain and there is no rain in sight,” she said at a fire staging ground at Canungra, in the Gold Coast hinterland.

Meanwhile, the weather bureau forecast worsening fire conditions on Friday afternoon, from the wet tropics in the north near Bundaberg to Ballandean near the southern border with NSW.

Prime Minister Scott Morrison was expected to visit the bushfire-ravaged region around Peregian Beach on the Sunshine Coast on Friday.

Thousands fled their homes earlier in the week after a fire allegedly lit by two teens became a raging inferno, threatening everything in its way.

Meanwhile in NSW, firefighters were made the most of favourable weather on Friday morning as they tried to bring under control more than a dozen bushfires ahead of potentially hot temperatures over the coming days.

About 40 fires continued to burn across the state, 13 of them uncontained on Friday.

“This work is being done ahead of potentially more hot and windy weather next week.”

Firefighters continue to take advantage of more favourable weather to undertake backburning across #NSW firegrounds. 13 of 40 fires are yet to be contained. This work is being done ahead of potentially more hot and windy weather next week. #NSWRFS pic.twitter.com/5rUyJSD9sN

The RFS is keeping a close eye on three major blazes that caused concerns earlier in the week at Bees Nest near Armidale, Drake near Tenterfield and Shark Creek in the Clarence Valley.

All remain at advice alert levels, along with a fire east of Glen Innes, which was being fanned by strong winds on Thursday night.

Bureau of Meteorology duty forecaster Neale Fraser said while it is expected to remain dry, the weather would be “reasonably benign” in coming days.

He said a high-pressure system meant winds weren’t going to be a factor.

He said longer-term conditions in NSW could potentially worsen towards the end of next week.