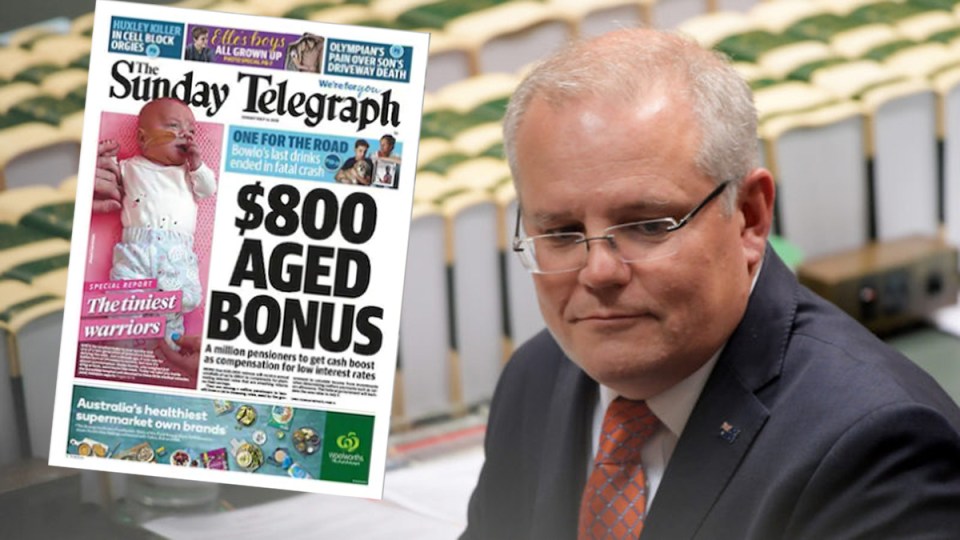 It was billed as an $800 aged bonus, with a million pensioners promised a cash splash under Prime Minister Scott Morrison’s deeming rate change.

But documents released under freedom of information laws to The New Daily have revealed that seniors will secure just $5 a week on average for singles.

The average windfall for aged pensioners is just $249 a year for singles – a fraction of the $800 pensioner bonus heralded across front pages in July.

For couples, the average payment under the deeming rate changes is $3 a week and $156 a year.

Thousands of pensioners not affected by the deeming rate changes because they don’t have investments will get nothing.

Nearly half of all pensioners who receive the couples rate – 46 per cent – will secure less than $130 a year.

Social Services Minister Anne Ruston has repeatedly refused to provide the breakdown of how many pensioners will secure the $800 maximum payout.

The FoI documents reveal that the percentage of pensioners who will secure the $800 aged bonus promised in front-page newspaper reports is indeed a rare breed.

According to the department’s data, they represent just less than 1 per cent of the one million pensioners who are better off under the changes.

The number of pensioners on the couples rate who will secure $780 to $910 under the deeming rate changes total just 191 couples across Australia.

National Seniors Australia chief advocate Ian Henschke said it was clear only a tiny fraction of the community will receive the $800 spruiked by the government.

Mr Henschke said because the changes are backdated, the first payment will be more generous in September. It will then shrink back to $3 a week on average.

“They will be tricked because when they open up their payment they will get a lump sum,” Mr Henschke said.

“Nobody has actually got the money yet. What we’ve got here is a classic case of a government not doing the right thing.”

The government uses an income and asset test to determine aged pension payments and the deeming rate is part of the income test.

Seniors have claimed the deeming rate is unfair because it assumes some pensioners are getting a better return from savings deposits than they do because interest rates are low.

For example, the first $51,800 of financial assets has the deemed rate of percent applied. Anything over $51,800 is deemed to earn 3 per cent.

On July 23, Ms Ruston’s office emailed The New Daily claiming the data did not exist to explain how many people got the maximum amount of $800.

“Sorry, it’s been a hectic few weeks! I understand the department provided you with a response about the limitations of the data. Unfortunately, that’s all we can provide at this time. Sorry again!” a spokeswoman said.

The FoI documents provided to The New Daily outlining the exact data requested, not including redacted documents, runs to more than 30 pages.

Previous freedom of information requests lodged by The New Daily revealed hundreds of pages of emailed correspondence back and forth between the minister’s office and the department over the original request for the information on how many pensioners get the $800.