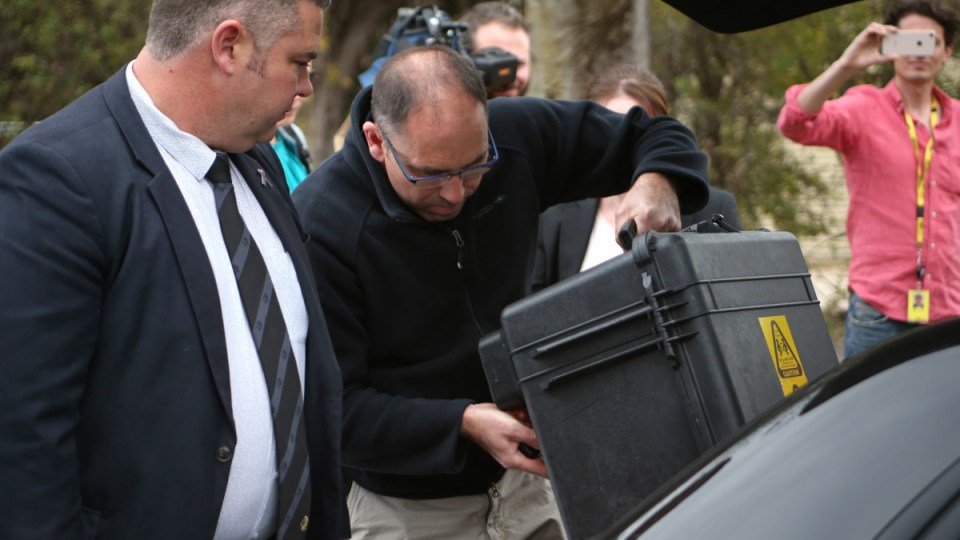 Police execute a search warrant on the home of an Australian intelligence officer in Canberra on Wednesday. Photo: AP

Prime Minister Scott Morrison has attempted to quell concerns over freedom of the press after another police raid added fuel to the debate.

The Canberra home of an intelligence official and a career diplomat was raided on Wednesday by the Australian Federal Police, with officers clutching garbage bags full of evidence as they left.

It came just months after twin raids on journalists, who could face charges over published stories based on leaked government information.

Mr Morrison has defiantly insisted he’s committed to press freedom, pinpointing the raids as a matter for the federal police.

It’s unclear if the AFP operations are linked, but the Prime Minister has cautioned against speculation.

The AFP operation comes three months after officers raided the Canberra home of News Corp journalist Annika Smethurst and the Sydney headquarters of the ABC.

The back-to-back June raids were in relation to separate stories based on leaked government information.

Ms Smethurst’s story outlined a government proposal to spy on Australian citizens without their knowledge.

While the prime minister denies any such plan was in train, Labor leader Anthony Albanese said the story was in the public interest.

He wants the government to look at better protecting whistleblowers, and says he’s not comfortable with the government’s attitude towards press freedom.

“They regard it as an option,” he told reporters in Brisbane.

“Freedom of the press is an essential component of our democratic system.”

Mr Dutton says he wasn’t informed of Wednesday’s raid ahead of time.

“The AFP execute warrants every day of the week and they investigate, obviously, hundreds of cases each year and it’s not something I’m involved in as the minister,” he told reporters in Brisbane.

He is married to Australia’s ambassador to Iraq, Joanne Loundes.

Canberra lawyer Kamy Saeedi told reporters outside the house it was a “complex” and “sensitive” situation.

Influential crossbench senator Rex Patrick wants the AFP to explain whether the raid is related to the recent media raids, but he’s confident police are acting independently of government.

“We have always said the AFP raids on journalists were not intended to intimidate journalists but the people who have the courage to talk to journalists,” he said.

Home Affairs secretary Mike Pezzullo said last month that the person who leaked the documents to Ms Smethurst should go to jail, warning the leaker had been identified.

Two parliamentary inquiries are under way – one into press freedom and whistleblowers, and the other looking at the impact of police and intelligence powers on the freedom of the press.

Morrison defiant over freedom of the press