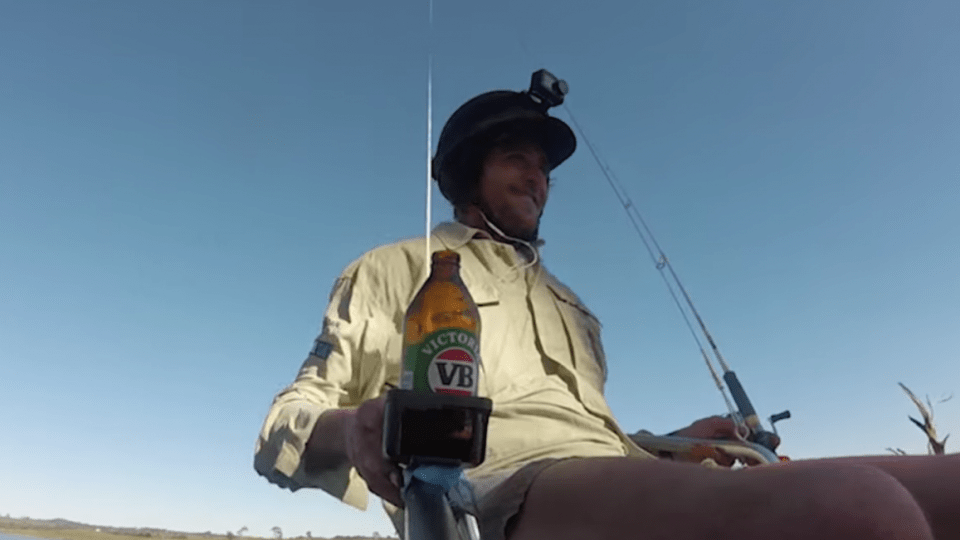 Video footage of a man fishing from a chair that's being lifted by a home-made drone has drawn the ire of the Civil Aviation Safety Authority. Photo: Facebook

The Civil Aviation Safety Authority is investigating footage posted on social media of a man fishing from a chair that’s being lifted by a home-made drone.

In the vision, taken at Upper Coliban Reservoir in central Victoria, the man, with beer at hand, is carried for several metres above the water, catches a fish and eventually returns to shore.

CASA spokesman Peter Gibson said there were serious safety risks involved with what appeared in the footage.

“This is a first for Australia, to have a large home-made drone being used to lift someone off the ground,” he said.

“It’s really not a sensible thing to do in any way, shape or form. There’s lots of things that could have gone wrong. Someone could have been seriously injured.”

Tim French, a Sunbury electrician who helped design and build the drone, has declined to comment.

Not clear if rules breached

Mr Gibson said severe breaches of aviation regulations could result in penalties of more than $10,000 in fines or CASA could pursue court action.

“It’ll take some time for us to gather the information, analyse all that, determine what the appropriate course of action is,” he said.

Aviassist, a drone training, licensing and auditing company, said the footage was risky due to the lack of quality control over the home-made drone.

“So we could build one in our backyard today and fly that either recreationally or commercially tomorrow,” he said.

“That’s why CASA has the rule set that they do – that we don’t fly near people or over the top of populated areas – because there isn’t that quality regime.”

“Of course we’re keeping them under review at all times, because the types of drones are changing, the ways drones are being used are evolving.”

Awareness of what can go wrong

Mr Anderson said while it appeared that no one had been hurt during the flight, it was a risky operation.

“Best-case scenario is the battery sets die and it plonks straight into the water.”

But he said as drones became more readily available, people needed a deeper understanding of how to use them safely.

“The perception is that they’re easy to fly and nothing does go wrong.

“You see a lot of people flying over festivals and things like that, but being they’re hobby grade-type components, stuff does go wrong a fair bit.

“People don’t tend to think about it.”