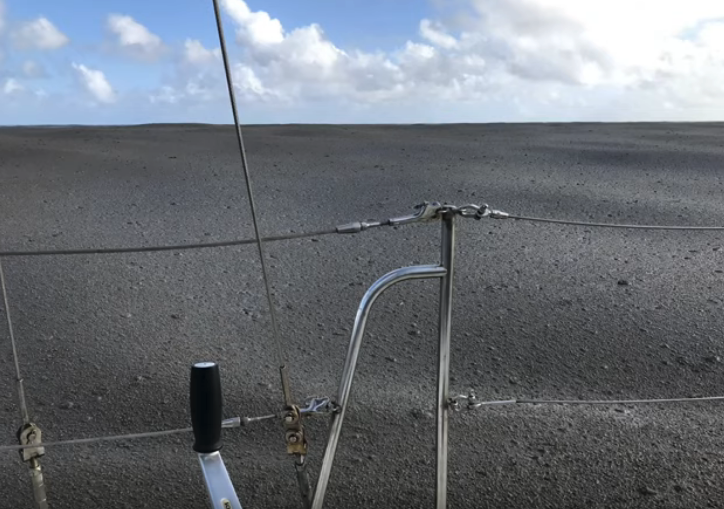 The yacht sailing through a sea of pumice stone on August 9. Photo: QUT

Drifting through the ocean, the sailors suddenly lost sight of water.

Surrounding their boat was a floating mass of pumice rocks — the result of an underwater volcanic eruption near Tonga two weeks ago.

Queensland University of Technology geologist Associate Professor Scott Bryan said it “would have been a really eerie experience sailing into this sea of floating rock”.

“No longer seeing water and hearing the scratching of the pumice against the hull,” he said.

Known as a pumice raft, this so-called island of floating rock is gradually heading for Australian shores and is so expansive it can be tracked via satellite.

Australian couple Michael Hoult and Larissa Brill detailed their experience in a Facebook post with the “total rock rubble slick” while sailing their catamaran to Fiji.

“The waves were knocked back to almost calm and the boat was slowed to 1kt [knot],” they wrote.

“The rubble slick went as far as we could see in the moonlight and without spotlight – we made a turn to starboard and managed to sail clear of the rubble slick.”

Associate Professor Bryan said along the way an abundance of marine life would attach themselves to the pumice raft, “hitching a ride” across the Coral Sea.

“In this 150-odd square kilometres of pumice out there right now, there’s probably billions to trillions of pieces of pumice all floating together and each piece of pumice is a vehicle for some marine organism,” he said.

He said pieces of pumice should start washing up along Australia’s coastline in seven to 12 months.

“When it gets here, [the pumice raft will be] covered in a whole range of organisms of algae and barnacles and corals and crabs and snails and worms,” he said.

“We’re going to have millions of individual corals and lots of other organisms all coming in together with the potential of finding new homes along our coastline.

“This is a way for healthy, young corals to be rapidly introduced to the Great Barrier Reef.”

Associate Professor Bryan has studied the phenomenon for two decades, and 15 years ago he published research about an earlier eruption involving the same volcano near Tonga.

“I saw pumice along the beach and thought it must have come from some eruption, which led me to forensically work out where,” he said.

Associate Professor Bryan said this sort of event was occurring every five years.

“[The raft] is a natural mechanism for species to colonise, restock and grow in a new environment,” he said.

“It’s just one way that nature can help promote regeneration.”

But he warned pumice rafts could also pose a navigational hazard for boats in the area.

“Pumice is very abrasive, it can scrape paint off boats, get lodged in the rudder systems, and can certainly be a nuisance and problem for boats,” Associate Professor Bryan said.

“It’s important for them to not necessarily sail through the pumice rafts.”

He said the sailors who encountered the latest pumice raft would provide him with samples of the pumice to assist his research.