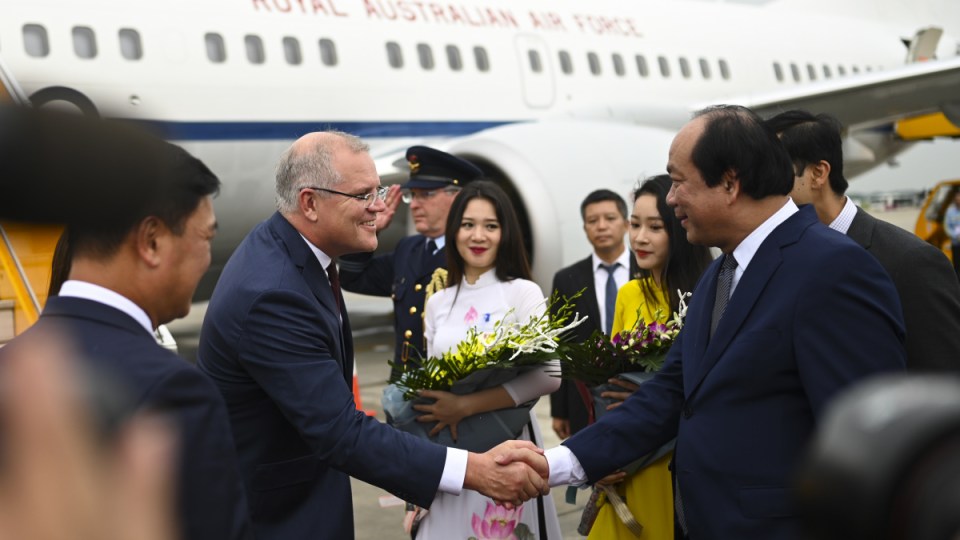 Scott Morrison has spoken against coercion in Asia while visiting Vietnam. Photo: AAP

Prime Minister Scott Morrison has fired a shot at coercion in Southeast Asia with tensions running high between Vietnam and China over movements in the South China Sea.

Mr Morrison landed in Vietnam on Thursday afternoon, making him the first Australian leader since 1994 to make an official bilateral visit to the country.

Speaking at a business dinner in Hanoi, Mr Morrison said the two countries wanted an open, inclusive and prosperous Indo-Pacific.

“An Indo-Pacific where we respect each other’s sovereignty and independence, because if we allow the sovereignty or independence of any of our neighbours to suffer coercion, then we are all diminished,” he said.

It comes after the US accused China of coercion and bullying over the incursions into Vietnamese territorial waters.

“We know that in Southeast Asia we need security and peace to maintain our prosperity,” Mr Morrison said.

He stopped short of naming China, in a move similar to a joint communique with Japan and the US about the South China Sea issued last month.

But the prime minister was keen to stress the importance of a secure Indo-Pacific to maintain and enhance prosperity.

“A region of sovereign independent states resistant to coercion, but open to engagement on the basis of shared interests,” he said.

The stand-off in the South China Sea is expected to be a key talking point when Mr Morrison meets with Vietnamese Prime Minister Nguyen Xuan Phuc on Friday.

Mr Morrison also paid tribute to former deputy prime minister Tim Fischer, who served in the Vietnam War and visited the country as Nationals leader in 1996.

“Tim Fischer was a dear friend of mine and of Jenny’s, and Australia will feel his loss heavily,” he told the function attended by a handful of major Australian businesses.

“She was pleased that the work Tim started so many years ago is continuing today and the relationship between Australia and Vietnam is going from strength to strength,” he said.

Australia will give $5 million over three years to establish an Australia Vietnam Centre for knowledge exchange to develop Vietnamese domestic and international leadership.

Thursday’s dinner was at the Metropole Hotel in Hanoi, the same venue US President Donald Trump met with North Korean dictator Kim Jong-un earlier in the year.