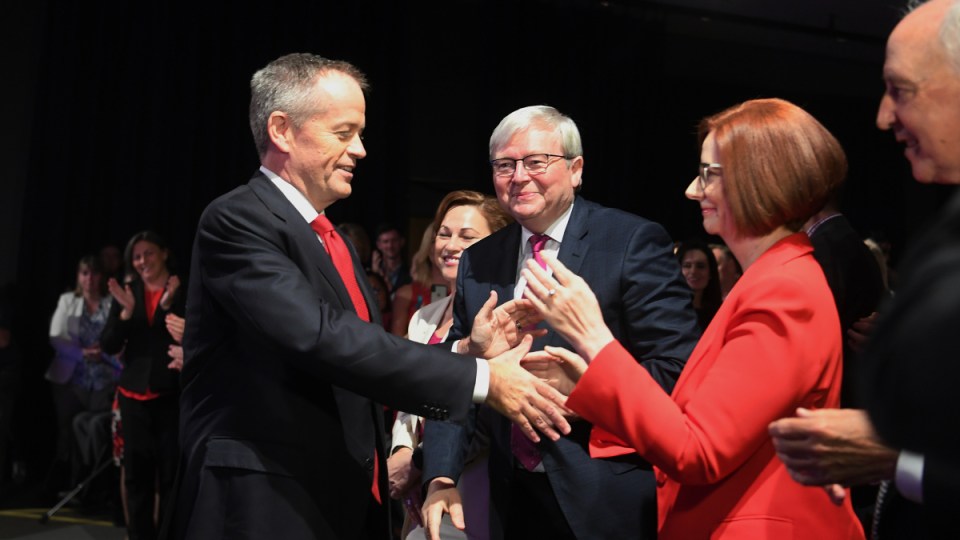 The former prime minister, who is close with new Labor leader Anthony Albanese, has also revealed MPs discussed the option of dumping Mr Shorten, but were hamstrung by rules that prohibited a revolving door of leaders.

Delivering an unplugged account at the Canberra Writers’ Festival of his “blunt” views on what went wrong for Labor at the May 18 election, Mr Rudd said the simple fact was Mr Shorten was not popular.

He described the idea of arguing for the franking credit changes from opposition as “nuts”.

“If we are being blunt about why we didn’t prevail, there are three reasons,” Mr Rudd said.

“One is, rightly or wrongly, the Australian people didn’t warm to him, they didn’t like him and they didn’t trust him.

“Two, it is unwise in my view, as an opposition to recommend complex changes to tax and retirement income for the simple reason that it’s too difficult to explain from opposition and it’s easy to turn into a fear campaign by the conservatives.

Mr Rudd is the second former prime minister to offer a post-mortem on the election result, with Paul Keating earlier accusing Labor of failing to understand the middle class.

However, while Mr Rudd described the dividend imputation reforms that the Liberals dubbed “the retirees’ tax” as “nuts”, Mr Keating argued Labor could have won with the policy if it had ploughed the savings into tax cuts, not new spending.

Labor MPs, including Kim Carr, have questioned Mr Keating’s critique that Labor lost the middle class, arguing the election results did not support that conclusion.

Mr Rudd has had a testy relationship with Mr Shorten since he emerged as one of the “faceless men” in the original leadership coup against Mr Rudd, installing Julia Gillard as leader.

But the pair patched things up before Mr Shorten switched sides again and voted for Mr Rudd to return to the leadership.

Asked if MPs ever raised the idea with him of rolling Mr Shorten before the 2019 election, Mr Rudd confirmed they had.

“I think from time to time they were thinking about it,” he said.

In an hour-long performance, Mr Rudd also riffed on China, Prime Minister Scott Morrison and recognition of Aboriginal and Torres Strait Islanders in the constitution.

He described Liberal MP Andrew Hastie, a former SAS captain and troop commander who recently wrote an incendiary opinion piece on the rise of China, as a “post-pubescent politician”.

Mr Hastie is 36, and is married with two children.

On China, Mr Rudd said Australia needed to be blunt in private conversations about its US alliance, which the Chinese would respect.

But he also warned against a creeping “McCarthyism” and “reds under the beds” in Australia’s dealings with the emerging superpower.

“Let us not turn this into neo-McCarthyism. It is very dangerous. It is very easy to slide into what I describe as a little bit of national hysteria.”