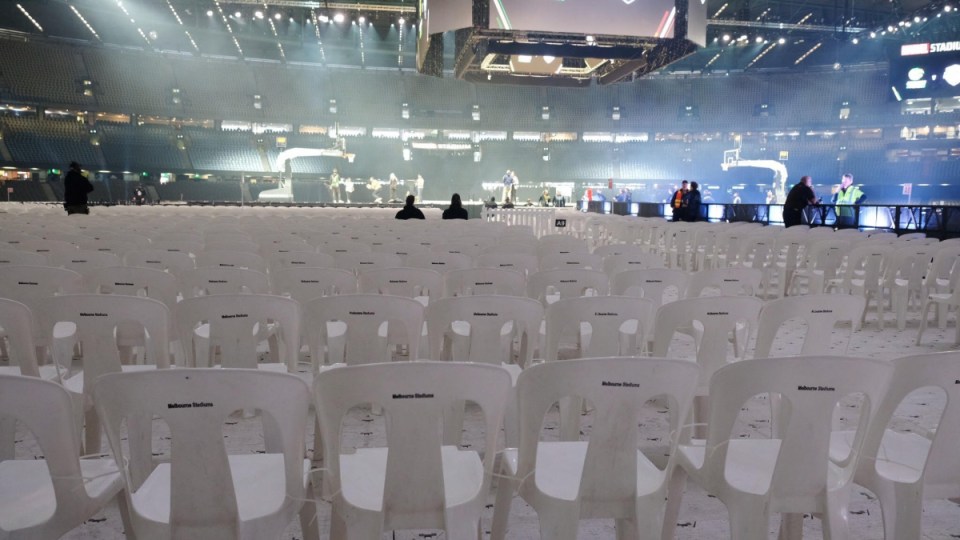 Basketball fans were not happy about the seating arrangements at the Boomers v Team USA all-star match. Photo: Twitter

Furious basketball fans are demanding refunds after paying hundreds of dollars for court side seats at an exhibition series between Australia and Team USA but could barely see game.

In what has been dubbed the ‘Fyre festival’ of basketball games, thousands of fans who flocked to Melbourne’s Marvel Stadium to see their favourite players were made to sit on white plastic chairs better suited to a backyard barbecue than an all-star basketball match.

Those who forked out more than $1000 to sit on ground-level seats in the front row felt the most hard done by.

They either had to stand up or crane their necks just to get a glimpse of Thursday’s World Cup warm-up match, won by the Americans 102-86, as the game was played on a raised court to accommodate crowds of around 50,000.

Actor Russell Crowe tweeted a video of his view from seats that he said cost him $1500.

More fans posted photos online showing how difficult it was for those in expensive court side seats to see over the raised court.

Imagine paying upwards of $1,500 to get courtside seats, only to realize your sitting on a $5 fold out chair and looking up at the court. #BoomersUSA pic.twitter.com/eWcFiuL51e

The seating arrangements were the final straw for fans who were already disappointed that most of the star players advertised to play in the game had pulled out weeks earlier.

In its original promotion of the matches that promised to deliver “the greatest names in basketball history”, TEG Live used images of stars Steph Curry and LeBron James.

Neither Curry nor James played, and Australian star Ben Simmons, who plays for the Philadelphia 76ers, was a late withdrawal from the Boomers squad.

The Australian Competition and Consumer Commission (ACCC) has released a statement saying it was “aware of refunds being made to consumers for the USA Basketball games … in Melbourne and Sydney on 22, 24 and 26 August”.

It is against Australian consumer law to make false representations in advertisements.

Promoter TEG Live has since paid refunds to customers who purchased tickets, admitting it used images of players who were not playing in its promotional materials.

Images of the dismal seating arrangements flooded social media on Thursday night, with some labelling the event a “stitch-up”.

$150 floor seats and you can’t see the court. All the players dropped out too. What a stitch-up. #BoomersUSA pic.twitter.com/5IWh3e74RK

Worst set up to watch a basketball match
What were they thinking?
$$$$$$#BoomersUSA pic.twitter.com/MGHtOEx37B

A second game is scheduled for Saturday afternoon.