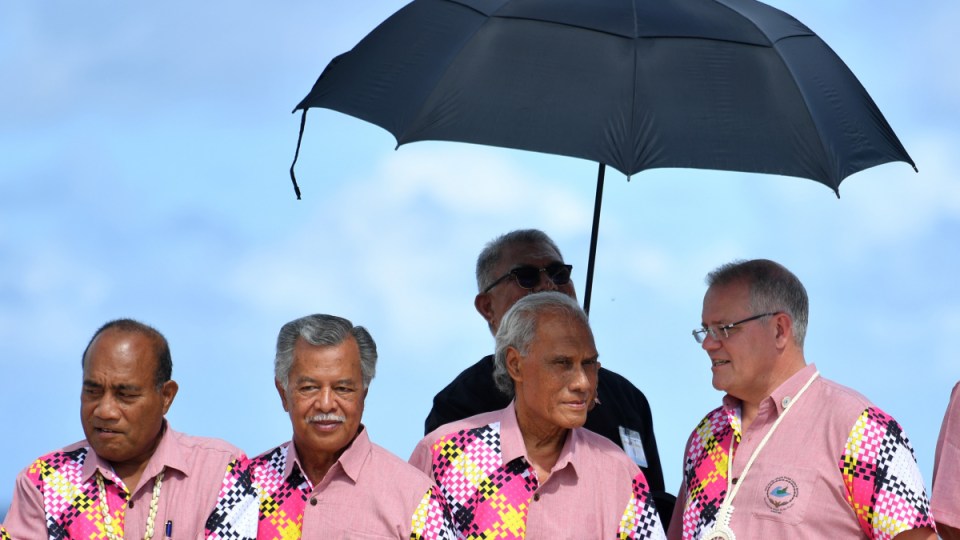 Scott Morrison with other leaders in Tuvalu for the 2019 Pacific Islands Forum Photo: AAP

Prime Minister Scott Morrison is under pressure as negotiations over the Pacific region’s climate stance reach the pointy end of debate in Tuvalu.

Mr Morrison and his Pacific counterparts are on Thursday negotiating the final communique from the Pacific Islands Forum, with Australia at odds with smaller nations over the mention of coal and reducing emissions.

Tuvalu’s prime minister Enele Sopoaga said it would be “symbolically unfortunate” if Australia watered down the language, while stressing the nation was an important partner of the Pacific.

“We have to go together with Australia and New Zealand,” he said ahead of an early morning fishing trip on Thursday before the leaders’ retreat.

The fishing trip – which was put on for partners of visiting leaders – nearly proved disastrous with Mr Sopoaga’s brother experiencing a near-drowning.

Tuvalu’s leader doesn’t want negotiations to go around in circles, hoping for an early consensus.

Smaller island nations have announced their own climate change declaration, which calls for an immediate global ban on the construction of new coal-fired power plants and coal mines. 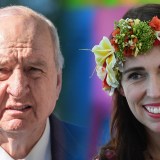 It’s the starting point for the final communique, dependent on desires from larger players Australia and New Zealand, which this week both redirected aid funding to the region.

Ms Ardern on Wednesday said Australia had to “answer to the Pacific on climate”. But New Zealand’s deputy prime minister Winston Peters has backtracked on the comments.

He said it was not the “proper picture” to think the region, or Ms Ardern, believed “Australians are somehow acting incorrectly”.

Mr Peters said many Pacific nations were seeking loans from China, which were being supported on the backs of “coal-fired everything”.

“There’s a big picture [where] we have to contemplate here and we’ve got to ensure that when we act in this big picture we act with consistency and integrity,” he told ABC’s Radio National.

Rather than calling for an immediate response to coal, the communique might simply a transition away from coal is needed, or might not mention coal at all.

Australia’s use of carryover credits to achieve its Paris emissions reduction target is also in the firing line.

On Wednesday, Mr Morrison said he was ready for the “tough conversations” with his Pacific family, while noting Australia’s significant support in the region.

Papua New Guinea Prime Minister Peter O’Neill could lend weight to Australia’s desire to remove mention of coal in the communique, indicating an interest in ensuring it doesn’t overreach.

This year’s final communique could mirror that from last year’s forum in Nauru, where Mr Sopoaga called out Australia for preventing a stronger statement on climate change.