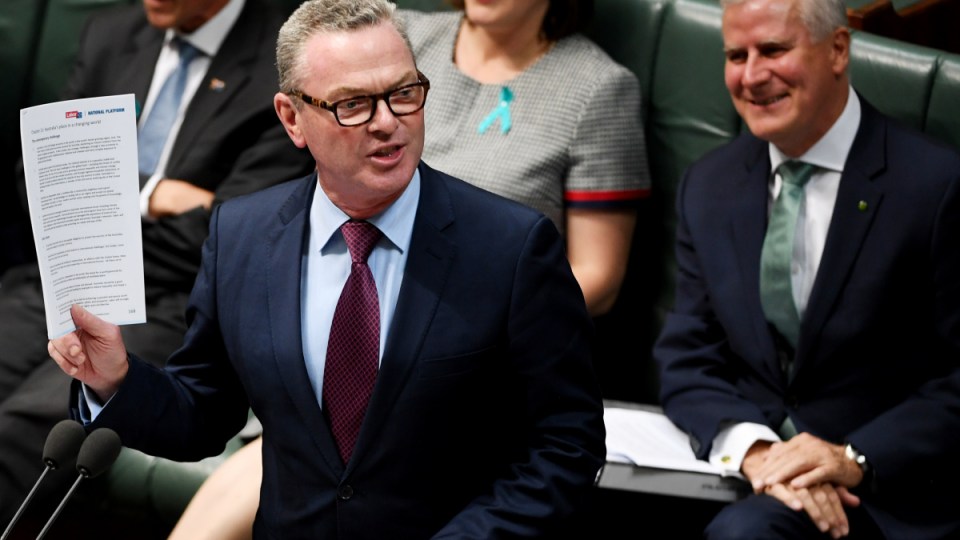 Christopher Pyne opened negotiations over a lucrative defence consultancy while he was still serving as defence minister in Scott Morrison’s cabinet.

The revelations are outlined in a submission to a parliamentary inquiry lodged by his new employer EY Consulting on Tuesday.

Mr Pyne has previously been cleared of any breach of the Prime Minister’s code of ministerial standards by the outgoing head of the Department of Prime Minister and Cabinet Martin Parkinson.

Mr Pyne declined to comment on Tuesday night about whether Dr Parkinson was aware of the contact with EY over a possible job when he was a minister or whether this was disclosed to anyone in the government.

Regardless, it would appear that talking to future employers or clients about work in the future does not breach the ministerial code, providing more ammunition for those who say it needs an overhaul.

A timeline provided confirms EY first contacted Mr Pyne on March 7, five days after he announced he was quitting politics.

He also mingled with EY executives at a forum hosted by the group on March 15.

“On 8 April 2019, I met with Mr Pyne to discuss his retirement from politics. At this meeting, we discussed Mr Pyne’s post-retirement plans, and his interest in utilising his experience as a politician and minister to assist a professional services firm grow their private sector defence industry business,” EY partner Mark Stewart’s submission states.

According to the Parliament House website, Mr Pyne served as defence minister until April 11, when the caretaker period came into effect.

“After the election was called on 11 April 2019, EY made a formal offer to Mr Pyne to commence with EY as a consultant,” the submission continues.

“The consulting agreement commenced on 7 June 2019 and requires Mr Pyne to provide EY with consulting services for two days a month for a period of six months, with an option to extend.”

Mr Pyne and former foreign affairs minister Julie Bishop were cleared of any breach of the standards following a probe but Senator Rex Patrick successfully called for a senate inquiry into jobs for former MPs.

But the timeline of events was not known and is outlined for the first time in a submission by EY Consulting.

EY said Mr Pyne in his role as “executive consultant” has been asked to “meet with EY’s defence industry team to advise them on how best to engage with the defence industry, based on his 26 years’ experience as a politician; attend initial meetings with private sector clients to introduce EY as a reputable provider of professional services; speak at relevant defence industry events as a representative of EY; advise EY’s defence industry team on our growth strategy; and provide advice on the interpretation of Department of Defence policy documents, such as the Defence White Paper”.

Mr Pyne had also provided undertakings under the Statement of Ministerial Standards, and was obliged to comply with them.

“Ultimately, only Mr Pyne can ensure compliance with the Statement of Ministerial Standards,” the submission says.

Dr Parkinson has also made a submission to the inquiry arguing former politicians have a right to find work after they leave politics.

“I believe that a former minister should have the ability to gain employment after they have left the Parliament – whether or not that employment relates to the matters they dealt with as a minister,” he said.

“As I mentioned in my 19 July letter to the prime minister, ministers – and parliamentarians for that matter – gain experience and knowledge in subject matters during their time in the Parliament. Extinguishing that experience is impossible.

“However, it is important that former ministers do not misuse the knowledge and information they have gained from their ministerial position(s) to benefit themselves or others.”

They include the release of a video featuring Ms Bishop and posted on Palladium’s Facebook page.

“As the committee would be aware, during Question Time on Monday, 22 July 2019, the Manager of Opposition Business, the Hon Tony Burke MP, raised questions about Ms Bishop’s involvement with Palladium. During questions, Mr Burke mentioned a video featuring Ms Bishop, which appeared on Palladium’s Facebook page – ‘Palladium: Make It Possible’,” Dr Parkinson said.

“I am advised that Ms Bishop had no part in the procurement process that awarded the contract to Palladium and this is consistent with the information Ms Bishop provided to me in my recent discussion with her on matters relating to the Statement of Ministerial Standards and her board position with Palladium.”