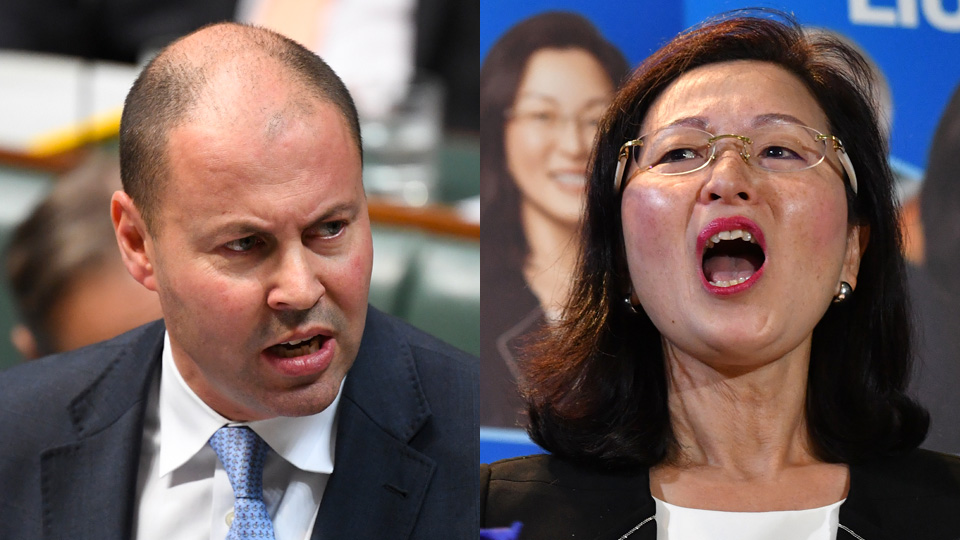 Mr Frydenberg faces two claims, one under section 44 over “offensive” claims about the citizenship of his mother.

His mother, a survivor of the Holocaust, migrated to Australia after World War II.

While any referral to the High Court would normally require a majority vote in the House of Representatives, the recent federal election provides a brief window for constituents to lodge a case directly with the Court of Disputed Returns.

Petitions were also filed on Wednesday asking the High Court to declare void Mr Frydenberg’s federal election win – and that of Ms Liu in neighbouring Chisholm – on the grounds of misleading and deceptive conduct in relation Chinese signs outside polling booths on election day.

A former challenger for Kooyong, Oliver Yates, has lodged a case, arguing that Mr Frydenberg’s election should be declared void because of the Liberals’ misleading and deceptive conduct.

Those proceedings are brought under section 362 of the Commonwealth Electoral Act 1918, claiming the results in Kooyong and Chisholm were affected by illegal conduct from the Liberal Party on the day of the election.

It relates to a prominent sign in Mandarin, prepared by the Liberals. In the Australian Electoral Commission’s official colours of purple and white, it explained that the correct way to vote was for the Liberal candidate.

“Elections in Australia should be contested with truthfulness, honesty, decency and respect for the voting public. The end should not justify the means,” Mr Yates said.

In Chisholm, the petitioner is Leslie Hall, who said she was concerned the AEC allowed deliberately misleading statements in a foreign language to be provided to people who might not fully understand electoral processes.

Lawyer Michael Bradley said the case raised critical questions for the conduct of elections in our democracy.

“The law in this area is very narrow; we don’t have a guarantee of truth in political advertising,” he said.

“However, even on the narrowest interpretation of the Electoral Act’s provisions, we believe that the Liberal Party went too far in Kooyong and Chisholm. It posted signs that were clearly designed to trick Chinese speaking voters into thinking that the AEC was directing them to vote in a particular way. That is just not on.”

Legal advice on this available. Oliver Yates to fight misleading and deceptive political advertising. Legal advice is at the bottom of the text on the webpage. #auspol #kooyongvotes https://t.co/gh284VfWvT

Mr Frydenberg, meanwhile, also faces a cection 44 dual-citizenship challenge from one of his constituents, a self-described “climate-change warrior at large” and anti-Adani protester, Michael Staindl. He also filed his challenge on Wednesday.

The Treasurer has consistently stated that his mother, Erica Strausz, who arrived in Australia as a seven-year-old, had papers marked “stateless”. Her family was sent to the Budapest ghetto by the Hungarian fascists, and she and her family eventually came to Australia after time in a displaced persons camp.

The deputy Liberal leader provided new information about his mother’s citizenship status shortly before the May 18 election. However, it was tabled in Parliament only recently.

In that updated document, Mr Frydenberg revealed his mother did not lose her Hungarian citizenship until 1948 – nearly three years after the end of World War II – despite claims she was stripped of it by the Nazis when she was born in the ghetto.

“Josh Frydenberg’s mother Erica Strausz was born in 1943, in the Budapest ghetto. That is where the fascists had pushed all the Jews in together, as a prelude to sending them to the gas chamber,” Mr Turnbull said.

“She wasn’t a Hungarian citizen when she was born, neither were her parents – you know why? The Hungarian fascist government, allied with Hitler, stripped Jews of all of their rights, the right to citizenship and the right to life. Her family fled Hungary at the end of the war. It was a miracle they weren’t killed as so many of their relatives were.”

Prime Minister Scott Morrison slammed the reports at the time as hysterical and “offensive”.

Victorian lawyer Trevor Poulton, author of the fictional The Holocaust Denier, had previously flagged plans to challenge the Treasurer’s Kooyong election in the High Court.

“Josh Frydenberg has been totally evasive about how his mother was rendered stateless,” Mr Poulton said.

“Finally we get a date and it’s 1948. That’s 2.5 years after World War II ended. This is not about a family fleeing the Holocaust.”

Following accusations of anti-Semitism, Mr Poulton does not appear to have followed through with his threats to file in the High Court.

Asked about the Section 44 claims again recently, Mr Frydenberg said they had been dealt with.

“These issues were dealt with comprehensively through the last Parliament, and the Coalition is confident that none of its members or Senators have issues in that regard,” he said.

“No one should deny what was an appalling and tragic event in world history. And it wasn’t just the Jewish people who were the victims of the Holocaust. It was many other minority groups.

“It’s a tragic period in world history. It should never be forgotten, nor forgiven.”