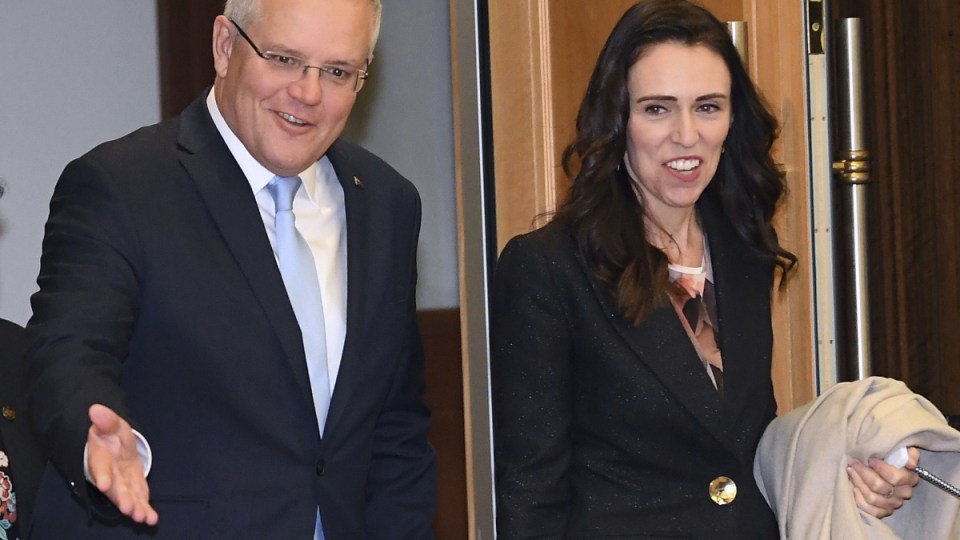 For the first time since the Christchurch massacre in March in which 51 people were killed by a lone gunman at two mosques, New Zealand Prime Minister Jacinda Ardern has met Scott Morrison in Melbourne for bilateral talks, but not without a few slight aviation hiccups.

Local media reported the prime minister’s Royal New Zealand Airforce plane was delayed due to “scheduled maintenance” prior to her arrival on Thursday.

And on Friday afternoon, Ms Ardern and her partner Clarke Gayford were again reportedly delayed, suggesting a commercial flight home might be a more reliable option.

Earlier, before getting down to business at the Commonwealth offices in Melbourne just before midday on Friday, Mr Morrison’s wife Jenny presented Ms Ardern with a soft toy pink rabbit and a book about Australian animals for her daughter Neve, 1.

She admitted a “gifting faux pas” as she had nothing to off in return: “I have to admit that we usually get a heads up on whether or not gifts are going to be exchanged”.

“I was all ready to roll and then was told ‘no gift exchange’. And so they’ve gifted us something for Neve.”

The meeting kicked off with light banter and laughter – and a focus on Australia’s support for NZ in the final of the recent Cricket World Cup.

Smiling, Ms Ardern quipped: “I’m not sure if NZ would have done the same if the role had been reversed.”

About the same time, her partner Clarke Gayford received a welcome note in their Melbourne hotel room, with a light-hearted note about how to make a pavlova, referencing a long-held debate over which country actually invented the egg-white and sugar fruity dessert.

This was placed in our hotel room in Melbourne.

Mr Morrison acknowledged the strength of the two nations’ relationship, noting “we’ve got a number of issues we’re just moving along and keeping in contact with”.

However, there was a clear divide in Australia’s policy to deport New Zealand-born criminals home, even if they have moved to Australia as toddlers.

Ms Ardern said the policy was having a “corrosive” impact on the relationship between the two countries.  Home Affairs Minister Peter Dutton says New Zealand is the only country whose citizens get visas to stay in Australia on arrival.

“But we have been very clear, if you come as a New Zealand citizen, a Brit, wherever you come from, your country of origin is where you go back to if you have committed a crime,” Mr Dutton told Nine’s Today show.

“Where people are sexually offending against children for example, we have had a big push to try and deport those paedophiles.”

“New Zealand absolutely accepts that Australia is within its right to deport those who have engaged in criminal activity in Australia,” she said.

“However, there are examples, what I would call on the more extreme end, where individuals have little to no connection at all to New Zealand, who have for all intents and purposes grown up in Australia, and those are the cases we continue to raise at every level.”

Meanwhile, at the start of Friday’s talks, Ms Ardern congratulated Mr Morrison on his election victory on May 18 and addressed him and his team of advisers.

“In the wake of Christchurch, the statement at the G20, the discussions about deployments – I really value the fact that neither of us hesitates to pick up the phone so I just want to acknowledge that,” she said.

The leaders also talked about business ties, including new e-invoicing opportunities, and the difficulties Kiwis face getting Australian citizenship.

“Our second-biggest trading partner, our biggest source of investment, but also our friends, so it’s great to be here with you – thanks for your hospitality.”

Labor leader Anthony Albanese has no plans to change the deportation policy either. Under it, 1500 New Zealand-born criminals have been deported from Australia since a tightening of rules in 2014.

“We think that the balance is essentially right but it’s legitimate, if there are issues, for Jacinda Ardern to raise those with Scott Morrison,” Mr Albanese said.

“We don’t want to see this to be a partisan debate,” he told Today.

As talks wrapped up, Mr Morrison did not answer a question on the deportations.

“Progress for a lot of issues today. It was wonderful … it’s always a great relationship,” he told reporters.