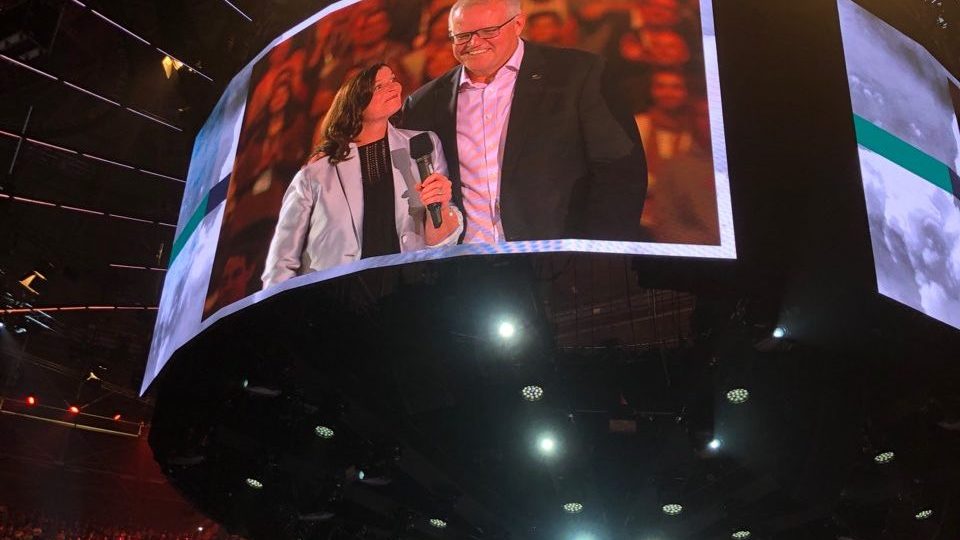 Scott Morrison and his wife Jenny have spoken of the “miracle” of the birth of his daughters after 17 years of infertility as he prayed to God for rain to end Australia’s drought.

Declaring “what the nation needs is more prayer and more worship”, the couple told the Hillsong conference in Sydney they had been sustained by the Australians who told them they were praying and fasting during the election.

“Our life have been blessed by miracles. What’s a miracle? A miracle is what the world can’t see but God can see,” the Prime Minister said prompting gasps and applause from worshippers.

“God just walks with us. You just walk the path God gives us. That’s what a miracle is.”

Mr Morrison, who declared in his election victory speech, “I have always believed in miracles”, said “absolutely” when asked by Hillsong founder Brian Houston if he still believed.

Mrs Morrison had multiple IVF rounds before the birth of the couple’s two daughters.

“What I would like to say is, nothing is impossible for God. Nothing,” she said.

She said she had not chosen life as a public figure but joked that “Scott chose it and I chose Scott”, prompting laughter from the crowd.

The Prime Minister received applause and a standing ovation from the 20,000-strong crowd of worshippers in Sydney.

“I am not a pastor, I am a prime minister. What my request is, love and have your congregations reach out,” he said.

“It’s not a political agenda. It’s just who we are. It’s who you are. And wherever you are, be who God made you.”

He also revealed that thousands of Australians had prayed and fasted in support of his victory, including Australia’s greatest female tennis player Margaret Court.

Mrs Court, a devout Christian, has more recently attracted criticism for claiming tennis is “full of lesbians” and transgender children are the work of “the devil”.

“It didn’t matter where Jenny and I went in the country, but someone would come up to us and tell us they had been praying for us. They had been fasting for us,” the Prime Minister said.

“I got an email from Margaret Court. It was a humble call to prayer. And we appreciate that.”

Holding hands with his wife, Mr Morrison asked the congregation to pray for rain to help the farmers battling drought.

“I want to pray for the drought. Let’s pray. Lord, we just pray for rain,” he said.

Earlier, he also prayed for veterans.

Mr Morrison also earned gasps and applause when he told the congregation, “we pray Lord that you will break the curse of suicide in this country”.

He said the freedom to speak of your faith and a culture of acceptance were just as important as legislation in protecting religious freedom.

“I speak about my faith with Jenny because I want everyone in this place to feel comfortable about talking about their faith in this country. It’s not a political agenda, it’s just who we are, it’s who you are,” he said.

“But what all that boils down to is the culture in this country,” Mr Morrison said. “It’s not the laws that make freedom of religion work, it’s the culture that accepts it

“My job is the same as yours: love God, love people. We’ve all got the same job.”