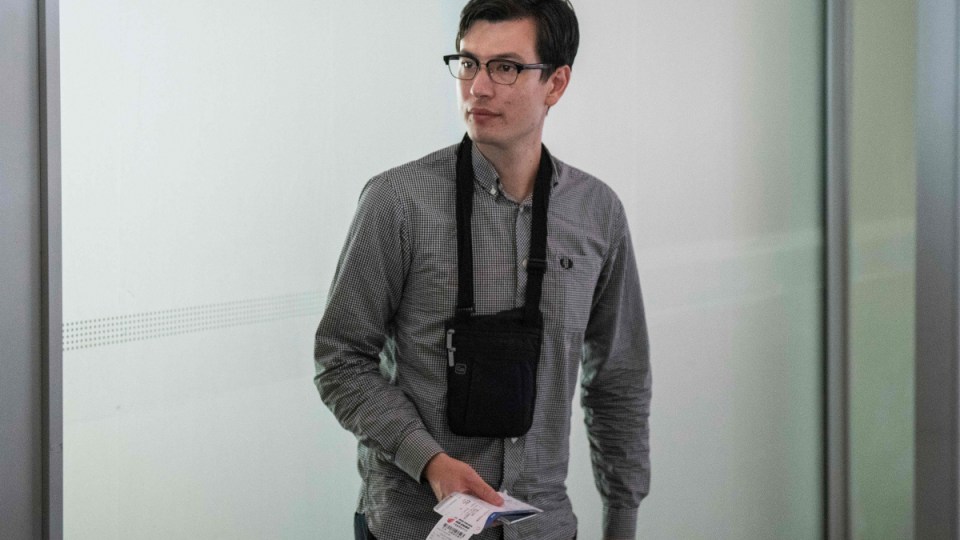 Alek Sigley prepares to leave Beijing for Tokyo after his release on July 4. Photo: Getty

Alek Sigley, the Australian student detained for a week in North Korea, has denied the “false allegation” he is a spy and spoken of his sadness at the prospect he may never return to Pyongyang.

The masters student made his first public comments on the circumstances of his arrest and detention on Twitter on Tuesday night after he was accused of being “caught red-handed” engaging in espionage.

“The allegation that I am a spy is (pretty obviously) false. The only material I gave to NK News was what was published publicly on the blog, and the same goes for other media outlets,” Mr Sigley tweeted.

“The whole situation makes me very sad. I will now be unable to receive my master’s degree from Kim Il Sung University after completing more than half the course and achieving good results.

“I may never again walk the streets of Pyongyang, a city that holds a very special place in my heart. I may never again see my teachers and my partners in the travel industry, whom I’ve come to consider close friends. But that’s life.”

1. The allegation that I am a spy is (pretty obviously) false. The only material I gave to NK News was what was published publicly on the blog, and the same goes for other media outlets. In this respect, I stand by the NK News statement: https://t.co/AQmpGs2qbW

Mr Sigley ran a tour company in North Korea called Tongil Tours but indicated he was “cancelling all tours at this time”.

“I am still very interested in North Korea and want to continue academic research and other work related to the country. But I currently have no plans to visit the country again, at least in the short term. Tongil Tours will be cancelling all its tours until further notice,” he tweeted.

“I will not be giving any media interviews, holding a press conference or answering questions about this on social media.”

He even showed he hadn’t lost his sense of humour.

“I loved being a student at Kim Il Sung University with all my heart. But life doesn’t always go according to plan and I have come to accept that,” he said.

After suggesting he would not answer any more questions on social media, Mr Sigley was asked by a Twitter user, “that’s cool bro but what’s your favourite Smith’s chips flavour though?”

The 29-year-old disappeared in late June, sparking serious concerns for his safety after it emerged he had been detained by authorities for unknown reasons.

But after high-level diplomatic efforts to secure his release at the request of Prime Minister Scott Morrison, Mr Sigley was released into the care of a Swedish envoy and emerged in China en route to his wife in Japan.

“Investigation revealed that at the instigation of the NK News and other anti-DPRK media he handed over several times the data and photos he collected and analysed while combing Pyongyang by making use of the identity card of a foreign student,” the report claimed.

The report said Sigley “honestly admitted his spying acts … and repeatedly asked for pardon, apologising for encroachment upon the sovereignty of the DPRK.”

NK News CEO Chad O’Carroll, who used Mr Sigley’s blog material and reports, also denied he had ever been involved in espionage.

“Alek Sigley’s well-read columns presented an apolitical and insightful view of life in Pyongyang, which we published in a bid to show vignettes of ordinary daily life in the capital to our readers.

“The six articles Alek published represent the full extent of his work with us and the idea that those columns, published transparently under his name between January and April 2019, are “anti-state” in nature is a misrepresentation which we reject.”

‘The whole situation makes me very sad’: Alek Sigley denies being a spy after his North Korea detention